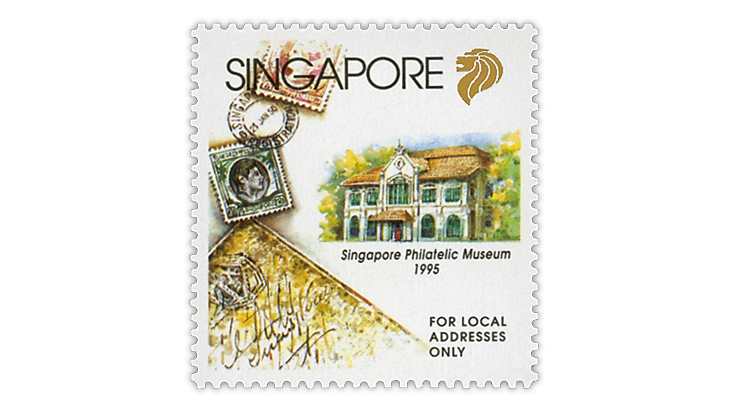 The Singapore Philatelic Museum’s opening on Aug. 19, 1995, was commemorated with a set of four stamps, including this nondenominated local-rate stamp. The museum, which has been closed for renovations since March 2019, has announced plans to reopen in 20

The Singapore Philatelic Museum is being transformed into a children’s museum, according to a March 6 announcement on the museum’s Facebook page.

The museum has been closed since March 18, 2019, for renovations.

The announcement on Facebook said: “We will reopen in 2021 as a dedicated children’s museum: a welcoming, imaginative and nurturing space that fosters learning amongst the young. We will introduce young visitors and their families to the museum-going experience. They will be able to explore and learn through artefacts, personal stories, hands-on and immersive displays and role-playing.”

The new children’s museum will also include stamps. The Facebook announcement said: “Stamps make excellent educational resources for children who find them attractive and accessible, and they will be part of the museum’s refreshed permanent galleries and special exhibitions.”

On its website, the museum describes itself as the “custodian and curator of Singapore’s treasure of philatelic materials”

It officially opened on Aug. 19, 1995, in a 1906 building that was formerly part of the Anglo Chinese School in Singapore. A set of four stamps was issued on that day to honor the opening (Scott 729-732).

The museum has been under the management of Singapore’s National Heritage Board since 2000. Prior to that, it was part of the Telecommunication Authority of Singapore.