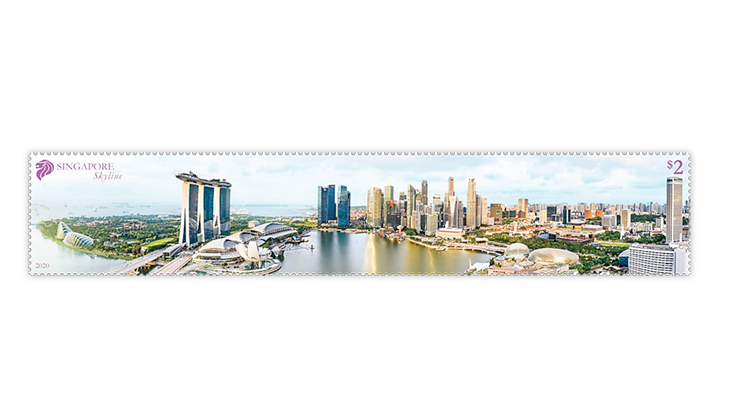 Sometimes something as simple as a huge stamp can bring a smile to a collector. For me this happened with a stamp issued Oct. 15 by Singapore Post Ltd. (SingPost). Measuring 163.2 millimeters (approximately 6.4 inches), it is the widest postage stamp issue in Singapore’s history. It will be interesting to find an example of it used on cover.

This $2 stamp showing the Marina Bay Central Business District is one of a set of two. The other stamp, a $1.40 denomination, depicts a residential estate area called the Housing and Development Board flats.

Having visited Singapore in January, I have to say the stamp truly captures the magical skyline. Visible in the skyline scene is the Fullerton Hotel, a 1928 landmark that once housed the main general post office. In September Singapore Post opened its second philatelic store in the basement level of the hotel.

While this new stamp is Singapore’s widest, it isn’t the world record holder.

I believe that a 170mm-wide (almost 6.7 inches) stamp issued by Thailand in 2017 (Scott 2946) holds that record. The stamp is so large that the Scott catalog editors pictured it vertically to better show the detail. This 9-baht stamp marks the 70th anniversary of the accession to the throne of King Bhumibol Adulyadej (1927-2016).

It is possible, though, that I have missed a wider stamp issue from somewhere else in the world, and I welcome any update collectors might have.