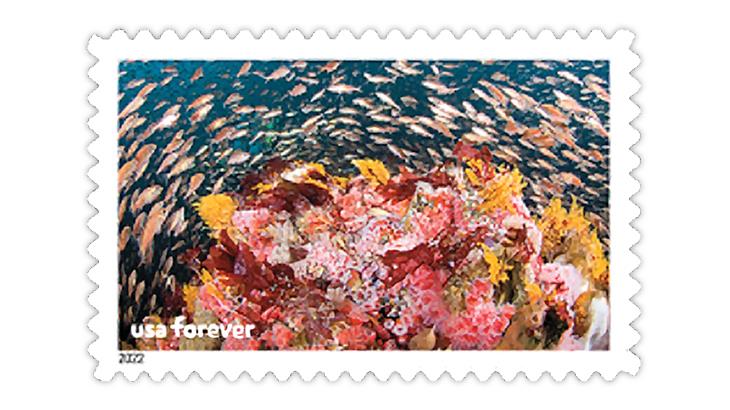 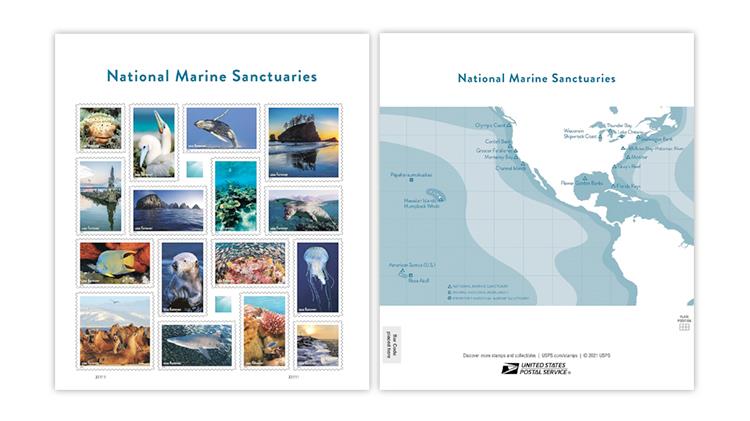 The United States Postal Service’s preliminary artwork for the pane of 16 National Marine Sanctuaries forever stamps includes a simple header that states the name of the issue. Plate numbers are shown in the bottom two corners of the pane. The back of the pane features a map identifying the locations of the national marine sanctuaries and marine national monuments, most of which are found along the East and West coasts.
Previous
Next

The National Marine Sanctuary System of the United States is celebrating its 50th anniversary this year.

In recognition of this milestone, the U.S. Postal Service will issue a pane of 16 stamps on Aug. 5 featuring dynamic photographs taken at the 15 national marine sanctuaries and two marine national monuments overseen by the National Oceanic and Atmospheric Administration.

Those wishing to attend the ceremony are encouraged to register with the Postal Service.

William D. Zollars, a member of the Postal Service’s board of governors, will serve as the dedicating official.

As shown on the Postal Service’s preliminary artwork for the pane, pictured here, the stamps are in four formats: horizontal and vertical rectangles (both the same size), and large and small squares.

The pane layout also includes two small images tucked between rows 1 and 2 and between rows 3 and 4 on the pane. There are no die cuts around these images.

“The images … are simply spacers to keep the stamps, which are all different sizes, evenly distributed on the pane,” USPS spokeswoman Kim Frum told Linn’s Stamp News.

According to Frum, the two images, which are the same, show the sun as viewed from underwater.

“National Marine Sanctuaries” is printed across the pane’s unadorned header. Two plate numbers are visible in the bottom margin at left and right.

On the preliminary design, the plate numbers are represented by an “X” followed by four digits.

Plate numbers on printed panes will consist of a “P” followed by four digits, one for each of the four process colors used to print the stamps: black, cyan, magenta and yellow.

The “P” represents USPS contract printer Ashton Potter (USA) Ltd., which printed a total of 38 million National Marine Sanctuaries stamps in 2,375,000 panes of 16 that will be available at post offices nationwide.

Each stamp shows a photograph and has the words “usa forever” in the bottom left corner.

The photographers and the locations are not identified on the stamps. ...

A map on the back of the pane, illustrated by Todd M. Detwiler, gives one a sense of the vastness of the National Marine Sanctuary System. Most of the sanctuaries are found along the East and West coasts of the United States.

All orders for National Marine Sanctuaries first-day cancels must be postmarked by Dec. 5.