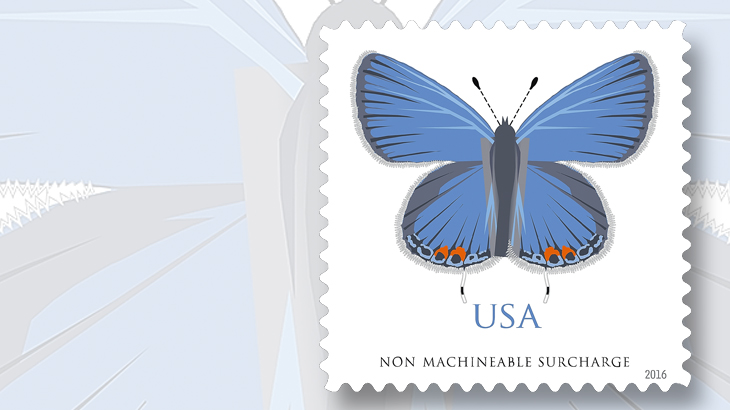 A new United States stamp for nonmachineable first-class mail is planned. The issue date has not been announced.

The United States Postal Service has announced it will issue a new nondenominated Butterfly stamp for the nonmachineable first-class rate, currently 68¢.

No issue date was disclosed for the new stamp.

“Nationally acclaimed artist Tom Engeman created the stamp design on a computer using images of preserved butterflies as a starting point,” according to the Postal Service. “The result is a highly stylized, simplified image of an Eastern Tailed-Blue rather than an exact replica.”

The new stamp is the sixth in a series of square Butterfly stamps issued to fulfill the nonmachineable first-class rate, which applies to certain irregularly sized envelopes, including square greeting card envelopes.

“The Eastern Tailed-Blue butterfly (Cupido comyntas) is named for the iridescent blue color of its upper wing surface, more vivid in the male, and for the short, thread-like tail on each hind wing,” the Postal Service said in an Aug. 30 press release. “Females are often slate grey, sometimes with vivid blue coloration close to the body. This 2016 stamp depicts a first-generation male, which displays the species’ brightest coloration.  Each year sees two or more generations, the latter being less colorful.”

As with earlier issues in this series, the self-adhesive stamp will be issued in a pane of 20. The words “Non Machineable Surcharge” are printed on the stamp below the butterfly illustration.