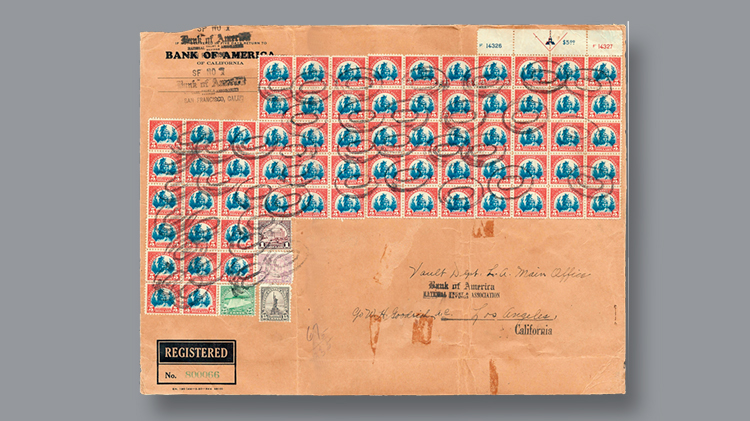 Mailed sometime after 1932 between two California branches of the Bank of America, this 10-inch-by-13-inch envelope is plastered with 67 $5 Statue of Freedom stamps. Among the intact multiples is a top-margin plate block of 20, right.

In early June, a collector from West Virginia sent me a color photocopy of a cover he purchased “some years ago at an antique mall in southwest Virginia.”

Specifically, it was a package wrapper mailed from San Francisco to the Philippines in 1936. It is franked with 32 examples of the United States 1923 $5 Statue of Freedom stamp (Scott 573), the high denomination in the popular Fourth Bureau definitive (regular-issue) series. Labels on the piece show the contents were “serum in bottles” valued at $200.

“Could this be the most $5 stamps, of this [issue], used on cover?” the collector mused in his letter. To find out, I referenced my Dollar Signs column headlined “$5 America multiples” in the Aug. 5, 2002, issue of Linn’s. One of the two illustrated items, part of a package wrapper, bore 33 $5 Statue of Freedom stamps.

Now I could give a negative answer to the collector’s query, but I figured there had to be a cover out there that had more than 33.

Next I contacted Fourth Bureau specialist Jay Stotts, who served up the magnificent cover you see here.

Those 67 stamps alone account for $335 of the $336.90 total franking, as noted by the penciled docketing just below and to the right of the 15¢ stamp.

Although there are no postmarks evident, Stotts said it was “definitely mailed after the implementation of supplementary registration in 1932.” Both sender and recipient were branches of the Bank of America in San Francisco and Los Angeles, respectively.

Stotts helped orient me regarding the franking by pointing out the boundaries of the $5 multiples on the cover.

“On this piece, the plate block of 20 (4x5) at the right is still intact. At the bottom of this block you can see that they tore it along the horizontal [guide] line,” Stotts explained.

“This was two divisions or branches of the same bank, so I assume these were financial documents, stocks, bonds, etc.,” Stotts said.

“If [the envelope contained] 100 stock certificates showing 1,000 shares of stock worth $33/share, it would easily be mailable, so I never doubted the weight calculation, especially based on the size of the envelope.”

Stotts also told me he is aware of another similar cover, from the same Bank of America correspondence, that he believes is franked with 65 $5 Statue of Freedom stamps.

Do you know the whereabouts of this Bank of America cover? For an added challenge, can you eclipse 67 $5 Statue of Freedom stamps on cover?

If so, I’d welcome hearing from you.