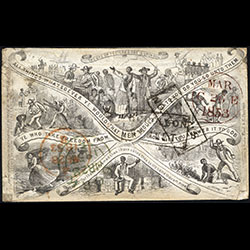 Scenes from Uncle Tom's Cabin decorate the reverse of this British anti-slavery cover published by James Valentine of Dundee, Scotland, and featured in the National Postal Museum's new exhibition. 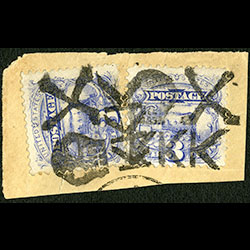 This "Skull and Crossbones" Ku Klux Klan postal cancel comes from Union Mills, Penn., circa 1870. The skull and crossbones was one of the earliest symbols adopted by the KKK. 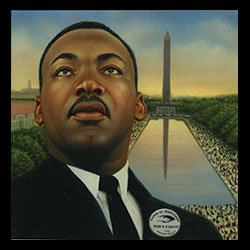 The approved art for the 1999 Martin Luther King Jr. stamp, part of the USPS Celebrate the Century series, was designed by Keith Birdsong.

The new exhibition that opened Thursday at the Smithsonian's National Postal Museum is a ground-breaking one.

The debut of Freedom Just Around the Corner: Black America from Civil War to Civil Rights marks the 150th anniversary of the end of the Civil War and is the museum's first exhibition completely devoted to African American history.

"It highlights letters carried by enslaved Americans, mail sent by and to leaders of the civil rights movement, and original artwork for numerous stamps issued by the United States Postal Service," the exhibition's website reads.

Indeed, the exhibition includes everything from stamped letters and covers carried by slaves to slave dealers, to mail from the Reconstruction-era Pennsylvania donning KKK-themed cancels, to mail sent by and stamps featuring important figures in black history.

Among the notable items is a cover sent to John Brown, the legendary abolitionist who led the attack on the federal armory at Harpers Ferry in 1859.

"His capture, trial, and execution became a cause célèbre that brought pro- and anti-slavery arguments to a fever pitch," the exhibition's website reads. "During his final month in jail at Charlestown, Virginia, Brown was allowed to send and receive mail."

Another interesting item is the approved stamp art for the 1999 Celebrate the Century stamp commemorating Martin Luther King Jr. and his I Have a Dream speech.

"A trace of brightness on the horizon represents hope, while King wears the March’s official badge," the exhibition website reads.

In all, about 100 items from the NPM's collection are part of the exhibition. Those items are accompanied by items on loan from other institutions and collections.