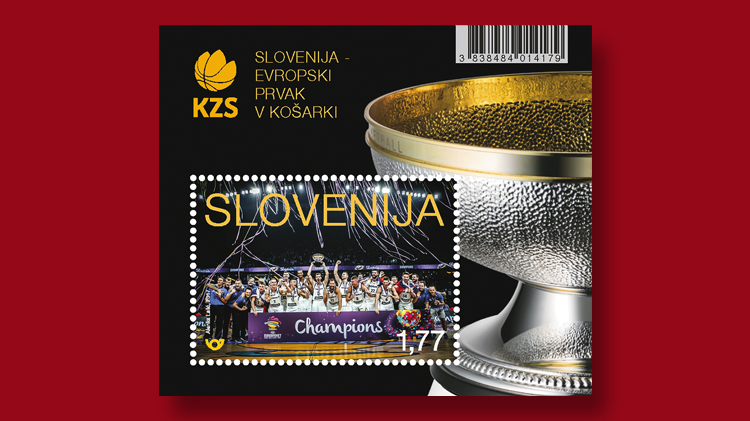 Goran Dragic of the Miami Heat is pictured in the center of the stamp on the souvenir sheet celebrating the Slovenian national team’s victory in the 2017 European basketball championship, EuroBasket. Dragic, who is from Slovenia, was the team’s captain.

Miami Heat basketball player Goran Dragic is pictured on a recent postage stamp from Slovenia. The stamp honors the Slovene national team’s victory in the 2017 European basketball championships, EuroBasket, on Sept. 17, and features a photograph of the team with Dragic in the center holding the trophy.

Posta Slovenije issued the 1.77 stamp Dec. 11, 2017, in a souvenir sheet of one. The EuroBasket trophy is pictured in the selvage.

According to news reports, Dragic didn’t know about the stamp until after it was issued.

A Dec. 11 article by Manny Navaro in the Miami Herald quoted Dragic, “I was surprised, but happy at the same time. It means a lot just to see the whole team on that little stamp. It’s great.”

Dragic also said he planned to buy the stamp to “have it for memories.”

Dragic, who is from Ljubljana, Slovenia, not only played on the national team, he was its captain and the championship’s most-valuable player.

In an article on the CBS Sports website, Jack Maloney said: “The Miami Heat’s Goran Dragic was the star, both in the title game — in which he finished with 35 points, 7 rebounds, and 3 assists — and throughout the tournament. He finished fourth in scoring, putting up 22.6 points per game, while also averaging 5.1 assists and 4.4 rebounds during the event, and was rewarded with the MVP award.”

For additional information about Slovenia’s EuroBasket 2017 souvenir sheet, visit the website www.posta.si or send an email to info@posta.si.