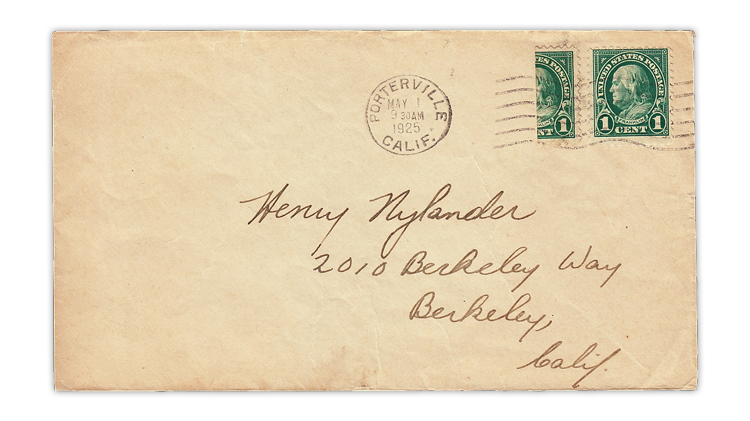 This cover, dated May 1, 1925, bears a bisect authorized by the postmaster of Porterville, Calif., to meet demand for ½¢ stamps that had not yet been delivered to meet the then-new third-class rate of 1½¢.

The May 13 issue of Linn’s Stamp News just landed on the presses and goes in the mail to subscribers Monday, April 29. And if you subscribe to Linn’s digital edition, you’re at the head of the line with early access Saturday, April 27. Here are three stories you'll want to check out.

When the United States ½¢ Nathan Hale (Scott 551) and 1½¢ Warren G. Harding (553) stamps were issued in 1925 to meet the new 1½¢ third-class mailing rate, (including unsealed single pieces up to 2 ounces), not all post offices received the stamps in a timely manner. The Odd Lot columnist Wayne L. Youngblood shares what happened next.

Americana Philatelic News, the quarterly journal of the Americana Unit of the American Topical Association, picks up on the American themes that appear on stamps and provides updates on new issues that have a tie to American history and culture.

Regulations prohibiting the use of regular postage stamps to assess postage due were emphatically stated in the January 1880 Postal Guide (ruling 207). These rules were later rescinded. See the full report by Tony Wawrukiewicz in his Modern U.S. Mail column.