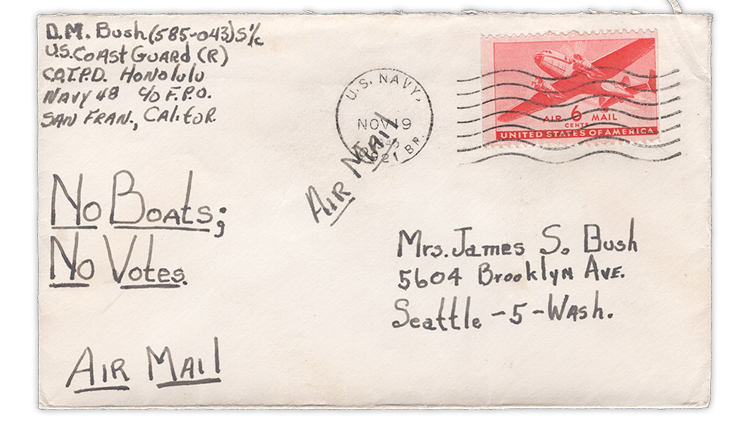 “No boats. No votes” was one rallying cry of American servicemen who were still waiting for transportation home and demobilization more than a year after the end of World War II. A Coast Guardsman in Honolulu sent this cover in November 1946.

It was a very good year, 1946. The war was over, and the United States was returning to a peacetime footing. But it was not the happiest of times for military personnel stuck abroad waiting for transportation home.

At the end of the war, 7.6 million U.S. servicemen and women were still stationed abroad and were being brought back to the United States to be demobilized. But the process was slow, and the troops and their families were unhappy with the lack of urgency being displayed by military authorities.

This found expression in many ways, including using the mail. Not only was dissatisfaction expressed in letters sent home, but also on the envelopes.

I recently found two envelopes on which a Coast Guardsman stationed in Honolulu writing home in November 1946 gave vent to his feelings.

The message on one reads, “From A Stranded Coast Guardsman.” The other, shown here, says, “No Boats, No Votes.” That cover is franked with the 1941 6¢ Twin-Motored Transport airmail stamp (Scott C25).

Eventually, as families and the servicemen pestered politicians, the matter was brought to the attention of the Army Chief of Staff Gen. Dwight Eisenhower, who ordered corrective action.

Though at this point nothing would have been fast enough, the situation did improve as families and military members kept up the pressure. By mid-1947, the number of military personnel still on the rolls was 1,566,000, down from 12,209,000 in 1945.