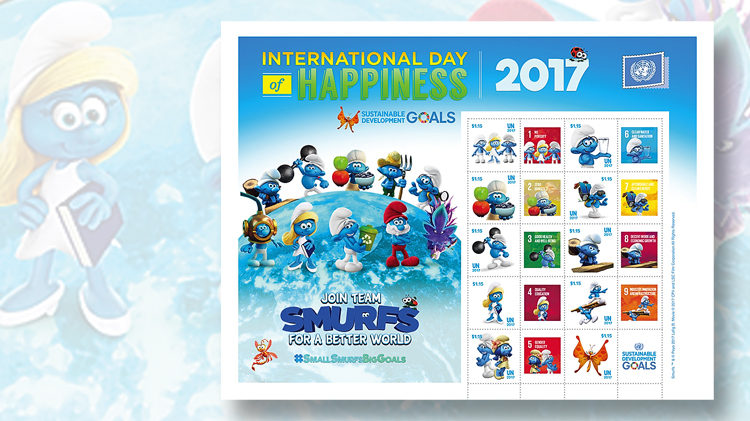 The United Nations Postal Administration celebrated the International Day of Happiness, March 20, and promoted the sustainable development goals on stamps and labels featuring the cartoon characters the Smurfs. This pane of 10 $1.15 stamps and 10 labels is for use from the post office at U.N. headquarters in New York City. Another pane was issued for the U.N. post office at the Vienna International Center in Vienna, Austria. 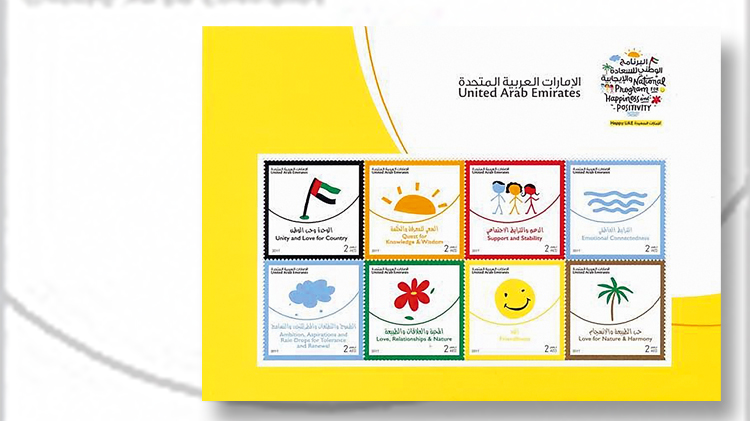 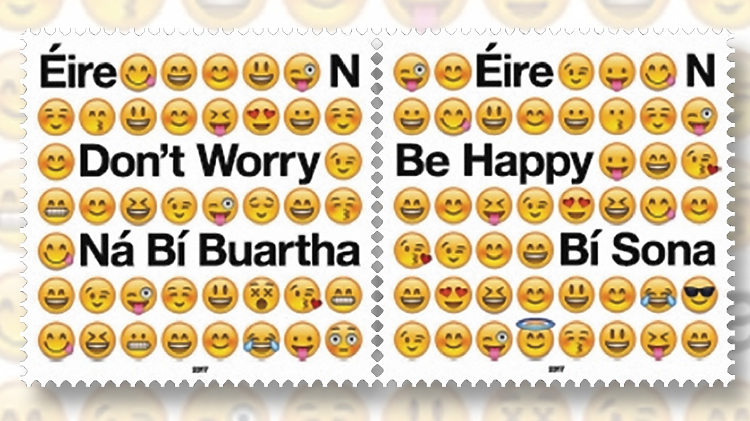 Ireland’s philatelic tribute to the electronic smiley faces called emoji features the message “Don’t Worry Be Happy” in English and Irish.
Previous
Next

New stamps from the United Nations Postal Administration, the Emirates Post Group, and Ireland’s An Post focus on happiness.

Issued March 20, the International Day of Happiness, 20 U.N. stamps feature the cartoon characters the Smurfs as they appear in the upcoming animated movie Smurfs: The Lost Village.

The United Arab Emirates selected a smiley face and other symbolic designs for its eight International Day of Happiness stamps.

Starting in the upper right of the pane of 10 $1.15 stamps and 10 labels for use from U.N. headquarters in New York City, the goals represented are no poverty; clean water and sanitation; zero hunger; affordable and clean energy; good health and well-being; decent work and economic growth; quality eduction; industry, innovation and infrastructure; and gender equality.

The last stamp depicts a Smurf butterfly, and the se-tenant (side-by-side) label shows the emblem of the goals.

The remaining eight goals are illustrated on the 0.80 stamps and labels for use from the Vienna International Center in Vienna, Austria: life below water; reduced inequalities; life on land; sustainable cities and communities; peace, justice and strong institutions; responsible consumption and production; and partnership for the goals.

The other two 0.80 stamps depict the butterfly and a ladybug.

Additional Smurfs are pictured in the selvage of the panes. Inscriptions in the upper selvage mention the International Day of Happiness and the sustainable development goals. Inscribed in the lower left of each pane are “Join Team Smurfs For A Better World” and “#SmallSmurfsBigGoals.”

The stamp panes were unveiled March 18 as part of a ceremony at U.N. headquarters featuring three stars of the film: Mandy Patinkin (the voice of Papa Smurf), Demi Lovato (Smurfette), and Joe Manganiello (Hefty Smurf).

Rorie Katz of the UNPA graphic design team adapted the Smurf images for the stamp designs. The UNPA also credited Sony Pictures Entertainment and the U.N. Department of Public Information.

The Emirates Post Group reports that the United Arab Emirates’ International Day of Happiness stamps feature symbols of the national program for happiness and positivity.

In addition to a smiley face, these 2-dirham stamps depict children’s designs of the flag, sun, family, the sea, a cloud, a flower, and a date palm.

Each stamp also bears a different inscription relating to happiness. For example, the stamp showing the smiley face is inscribed “Friendliness.” The stamp picturing a cloud bears the longest inscription, “Ambition, aspiration and rain drops for tolerance and renewal.”

In announcing the stamps, Abdullah Mohammed Alashram, acting CEO of Emirates Post Group, said, “Emirates Post Group aims to spread happiness and positivity concepts locally and internationally, through these special stamps that highlight the role of the National Program for Happiness and Positivity, as postage stamps are a great channel for cross-cultural outreach, covering different countries, individuals and civilizations across the globe.”

Also present at the stamps’ unveiling was Ohood Khalfan Al Roumi, the minister of state for happiness.

Oriental Printing Press in Bahrain printed the stamps by offset in sheets of eight. The issue also includes a souvenir sheet.

Although An Post said that its March 16 issue celebrates the emoji, the happiness message is hard to miss. One stamp in the se-tenant pair is inscribed “Don’t Worry” in English and Irish (Na Bi Buartha), and the other bears the message “Be Happy” (Bi Sona).

Both stamps are nondenominated. The “N” that completes the top row of emoji in the designs indicates that the stamps pay the domestic rate, currently €0.72.

A press release from An Post gave a brief history of emoji: “These small digital icons that are used to express an idea or emotion, originated on Japanese mobile phones in the late 1990s. Their popularity exploded, however, when Apple, Android and other mobile operating systems began to include them in their phones.

“Emoji has now become a worldwide, language-independent form of communication. Some might even argue that emoji is a form of pop art and they might have a valid point: There are now thousands of emoji used daily worldwide to convey humour, enhance messaging, make a point or to describe things.”

The design firm the Stone Twins designed the stamps. Cartor Security Printers printed them by lithography in sheets of 16.

Additional details are available on the website of An Post’s philatelic bureau. The mailing address is Philatelic Bureau, Box 1991, GPO, Dublin 1, Ireland.

The Emirates Post Group can be found here, and the mailing address is Box 99999, Dubai, United Arab Emirates.