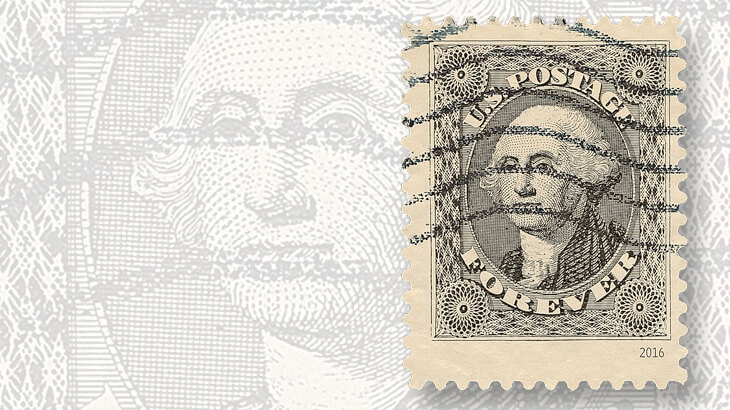 A soak in very hot water and a good deal of patience were required to remove this Classics Forever stamp from its envelope paper.

In late May, the United States Postal Service announced that the self-adhesive Classics Forever commemorative stamps would have soakable adhesive.

The stamps, in a souvenir sheet of six, were issued June 1 at World Stamp Show-NY 2016 in New York City.

When the first examples began turning up on mail, I decided to test their soakability.

Pictured nearby is a Classics Forever stamp that I successfully liberated from its envelope clipping.

After about 30 minutes, only the edges of the stamps had lifted away from the envelope paper.

When I tried to peel a stamp from the paper, the adhesive layer came with it — along with some of the envelope paper.

Not so long ago, most U.S. self-stick stamps were printed on paper with a water-soluble layer between the stamp paper and the adhesive.

This allowed the stamp to be soaked without difficulty, leaving the adhesive layer on the envelope paper.

My first efforts with the Classics Forever stamps did not support the Postal Service’s assertion that they were soakable.

But I wasn’t ready to throw in my soaking bowl and drying towel quite yet.

For round two, I used water that was extremely hot and allowed the stamps to soak for a full 30 minutes.

Using tongs, I carefully fished a stamp from the water.

As before, the edges of the stamp had separated from the envelope paper, leaving the center of the stamp still attached.

Back into the bowl the stamp went, for another 15 minutes.

Somewhat more separation between stamp and paper was evident when I removed the stamp again.

With care and patience, I was able to peel the stamp away from its adhesive layer, which remained on the clipping.

After drying, I had a fault-free Classics Forever stamp ready for placement in a stamp album.

So, yes, the Classics Forever stamps are soakable.

Are they as easy to soak as some of the older U.S. self-stick stamps?

But with care and patience (and hot water), you should experience soaking success.