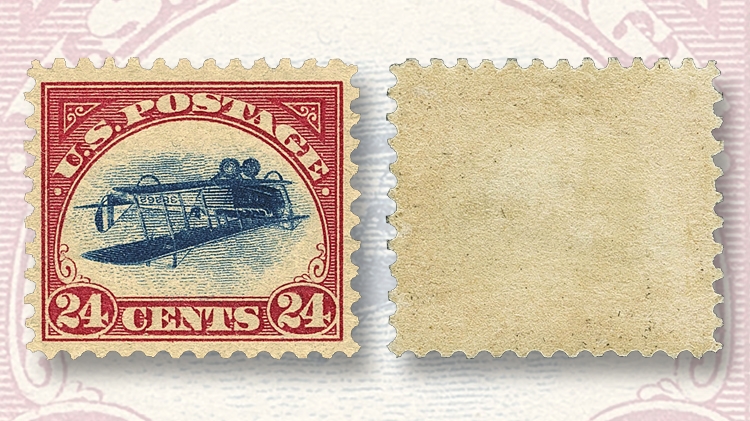 The Position 76 Jenny Invert stamp, recovered last year six decades after it was stolen, was auctioned May 11 for $295,000 to benefit the American Philatelic Research Library.

One of the more famous examples of one of the world’s most famous stamps was sold May 11 by Robert A. Siegel Auction Galleries of New York City.

The Position 76 Jenny Invert stamp, once part of four attached stamps known as the McCoy block, sold for $295,000, a sum that includes an 18 percent buyer’s premium added by Siegel to the final bid of $250,000.

As reported in Linn’s Stamp News last year, the stamp was stolen decades ago and finally turned up inexplicably in Northern Ireland before it was returned to the United States last year.

Bidding for the error stamp opened just a few minutes after 1:30 p.m. with a starting bid of $120,000 out of multiple bids received by the Siegel firm prior to the sale.

Siegel president Scott Trepel fielded a rapid succession of higher bids fired in from participants on the telephone, on the Internet, and live in the firm’s auction gallery.

Bidding continued between phone and Internet participants, stalling briefly at $230,000 before encountering a $240,000 bid from the Internet, and the winning $250,000 bid, which came in over the phone.

The breathtaking $130,000 climb from start to finish lasted exactly 90 seconds before Trepel’s hammer closed the sale.

The stamp was consigned to the Siegel firm by the American Philatelic Research Library. The library had speculated that the stamp would attract a winning bid between $150,000 and $200,000.

The value of an unused, undamaged stamp in very fine grade as listed in the 2018 Scott Standard Postage Stamp Catalogue is $450,000.

The Jenny Invert is the famous 1918 24¢ carmine rose and blue airmail stamp with an inverted center that gives the appearance of the airplane flying upside down (Scott C3a).

Only one sheet of 100 error stamps was found in 1918, purchased by a collector named William T. Robey on the day the stamps were first sold in Washington, D.C.

The stamp auctioned May 11 was once part of an intact block of four owned by collector Ethel Stewart McCoy. It was stolen from an American Philatelic Society exhibition in 1955, and finally surfaced more than 60 years later, separated from its companions and artfully reperforated on two sides in an unsuccessful attempt to conceal its true identity.

Before her death in 1980, McCoy had donated ownership rights to the still-missing stamp quartet to the APRL, which today is located in Bellefonte, Pa.

The recovered Position 76 stamp was returned to the library less than a year ago, handed over by Keelin O’Neill of Northern Ireland, who found it among possessions left to him by his late grandfather.

Sundman, a longtime supporter of the APS and the APRL, had offered the reward just a year and a half earlier in an effort to renew interest in locating the missing stamps.

The Position 76 stamp then became the second invert from the stolen block of four in the possession of the APRL, and third to be recovered.

The Position 65 Jenny Invert was recovered in 1982, returned to the APRL, and has been regularly displayed by the APRL at national APS stamp shows.

The library also had brief possession of the Position 75 stamp from the same block, which surfaced in the 1970s and was returned to the APRL in 1981. It was sold in a 1981 auction.

That leaves just one stamp from the error block still missing: the whereabouts of the Position 66 stamp have remained a mystery since the 1955 theft.

During a joint meeting of the APS board and the APRL trustees held Oct. 28, 2016, at the American Philatelic Center in Bellefonte, the decision was made to sell the recently recovered Position 76 stamp.

After hearing a proposal from APS executive director Scott English and APRL president Roger Brody, it was decided to sell the recovered stamp and use the money to reduce the $600,000 loan that was taken out to complete construction of the new library building at the American Philatelic Center.

The stamp was certified by both the Philatelic Foundation and the American Philatelic Expertizing Service in 2016. Both agencies note that the stamp was reperforated at top and left, and that it has original gum and a small thin.

The 48-page Siegel auction catalog for this sale can be digitally downloaded from the Siegel website or ordered in print from the firm.

Cowritten by Trepel and stamp expert Ken Lawrence, it provides a substantial history of the 24¢ Jenny stamp, America’s first airmail issue, plus details of Robey’s 1918 purchase, the McCoy block, the 1955 theft, and the eventual return of the three stamps to the APRL.