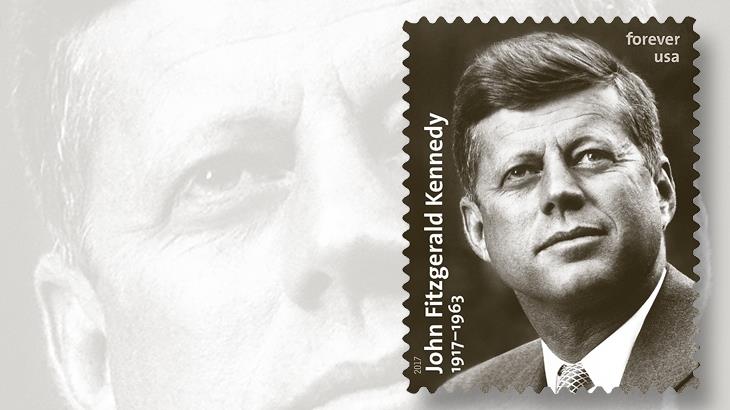 The John F. Kennedy stamp will be issued Feb. 20 in Boston, Mass., according to information revealed Jan. 5 by the U.S. Postal Service. 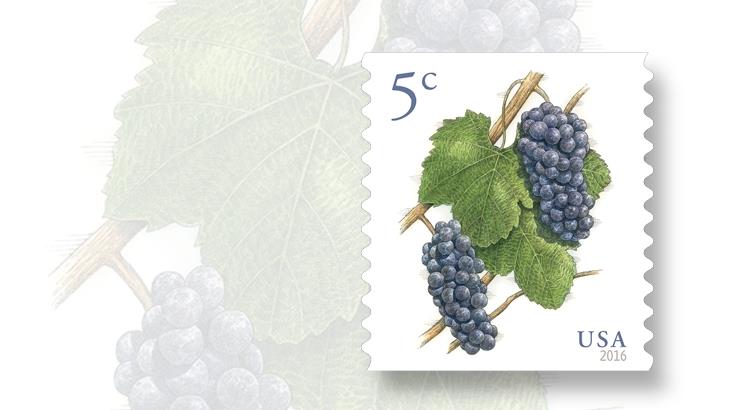 The 5¢ Grapes coil was issued Feb. 19, 2016. New varieties of the Grapes and Pears stamps will be issued Feb. 24 and March 23, respectively, according to the U.S. Postal Service.
Previous
Next

The United States Postal Service has announced issue dates and locations for several U.S. stamps that will be issued during the first three months of 2017.

In addition, two new listings for familiar definitive stamps were included on the list, apparently signaling that new varieties of the Fruit definitive series are on the way.

The two high-value definitive stamps in the American Landmarks series — the $6.65 Liliuokalani Gardens stamp and the $23.75 Gateway Arch stamp — will be issued without ceremony on Jan. 22. Collectors will find that first-day postmarks for both will be offered from Kansas City, Mo., rather than Hilo, Hawaii, and St. Louis, Mo., where these American landmarks are respectively located.

The Uncle Sam’s Hat nondenominated (21¢) additional ounce stamp will be issued Feb. 18, in Mesa, Ariz., which coincides with the Aripex stamp show and exhibition taking place in that city Feb. 17-19.

President’s Day, Feb. 20, is the announced issue date for the John F. Kennedy forever stamp, with a ceremony in Boston, Mass.

The forever stamp commemorating 150 years of Nebraska statehood is scheduled to appear March 1 in Lincoln, Neb.; the Mississippi Statehood stamp will be issued at the end of the same month, on March 31, in Gulfport, Miss.

The WPA Posters set of 10 stamps will be issued March 7 in Hyde Park, N.Y.