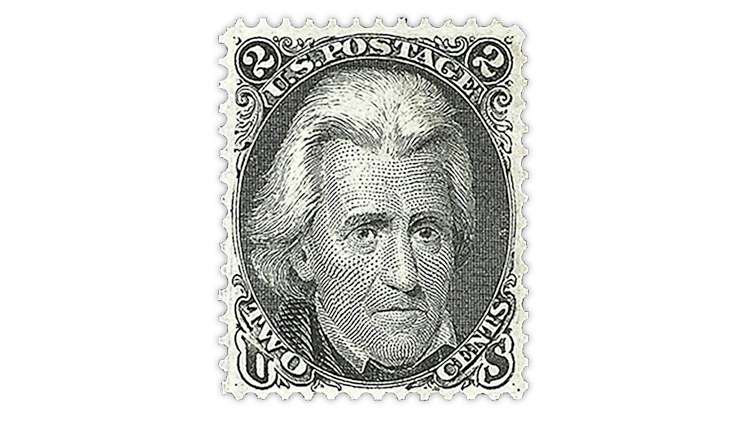 Andrew Jackson (1767-1845) was a war hero, one of the fathers of the modern Democrat Party and the seventh president of the United States.

He served as president from 1829 to 1837. In the previous presidential election of 1824, he had won a plurality in the Electoral College as well as the popular vote. However, in a four-way race, he lacked a majority.

In what Jackson supporters would forever after call “The Corrupt Bargain,” the House of Representatives elected John Quincy Adams, the candidate who finished second in both the Electoral College and the popular vote, as president.

Jackson was the fourth American — after Benjamin Franklin and presidents George Washington and Thomas Jefferson — to appear on a stamp, doing so in 1863 on a 2¢ black stamp (Scott 73).

In 1867, the U.S. Post Office Department began experimenting with grills embossed into the paper of postage stamps as a security measure.

Quoting the 2019 Scott Specialized Catalogue of United States Stamps and Covers: “A peculiarity of United States issues from 1867 to 1870 is the grill or embossing. The object was to break the fiber of the paper so that the ink of the canceling stamp would soak in and make washing for a second using impossible.”

Centering is always a problem because the margins on all of the Black Jack stamps are small, and the design takes up almost all of the face of the stamp.

Check the grading illustrations for the Black Jack stamp in the Introduction to the Scott U.S. Specialized catalog.