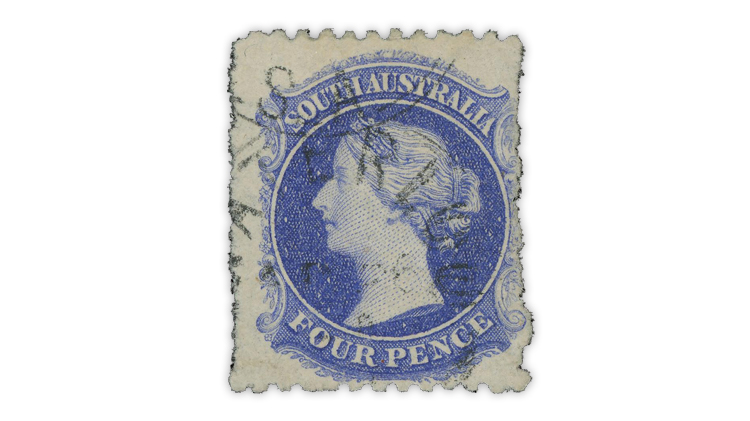 Abacus Auctions’ Nov. 9 sale of the Pearce collection of South Australia stamps and usages includes this used example of a surcharge-omitted error of the South Australian 3-penny-on-4d Queen Victoria stamp.

“Dr. Don Pearce has been one of the most prominent philatelists in his home state of South Australia for the past half-century,” Abacus said in the sale introduction. “His philatelic mission has been to create a collection of South Australian stamps and covers that is second to none.”

Abacus said that almost all of the 530 lots in this sale are new to the market, adding that many of the items were in Pearce’s possession since the 1970s and 80s and that many were acquired privately.

According to Abacus, one of Pearce’s favorite stamps was the South Australia 3-penny-on-4d sky blue Queen Victoria (Scott 44). A used example of the surcharge-omitted error on this stamp (44b) is included in the sale.

Abacus states that three unused examples exist with one in the Royal Collection and 11 used examples are known of which four are in institutions.

The used error has a provenance that includes “WE Lyle, AE Fryar, Brigadier DAK Redman, Julian Beresford and Laurie Malin,” according to Abacus.

Abacus is offering this surcharge-omitted error with an estimate of A$50,000, roughly US$31,450 in mid-October.

The auction house also called attention to “a remarkable array of 28 lots of the original London Printings, including the exceptional rejoined pair of the unissued Shilling Violet, and a further 20 lots of the Adelaide Printings plus 13 of the First Rouletted Issue.”

Also included in the catalog is a section of hand-painted stamp essays, proofs from the archives of printer De La Rue and more.