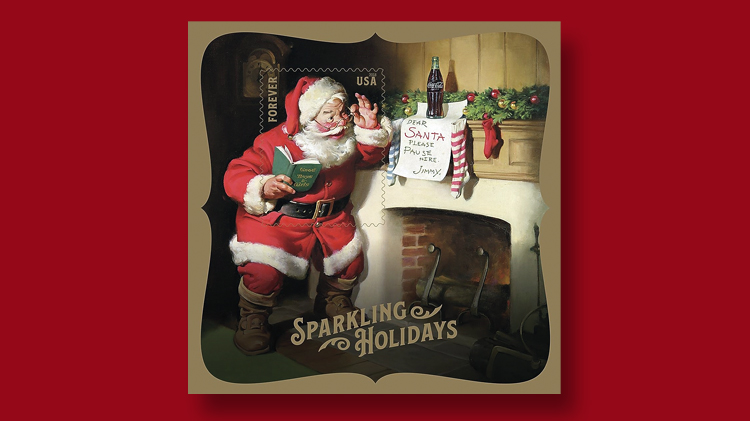 This single-stamp Sparkling Holidays souvenir sheet will be issued along with a set of four forever stamps on Oct. 11. 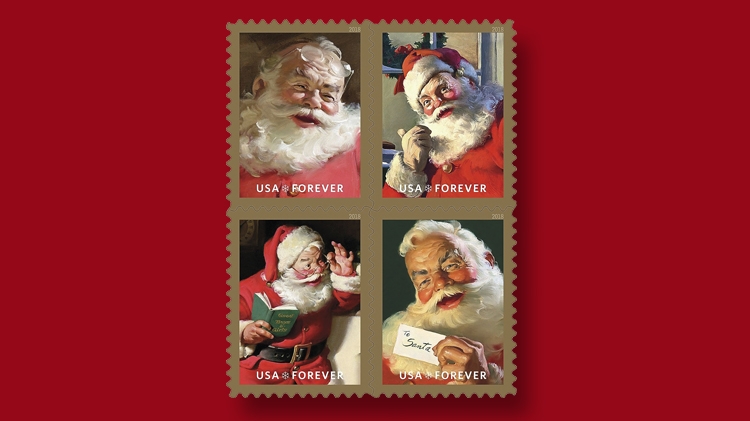 Four individual Sparkling Holidays forever stamps will be issued Oct. 11 in a double-sided pane of 20.
Previous
Next

A souvenir sheet with a single stamp has been added to the Sparkling Holidays set planned by the United States Postal Service.

In an Aug. 28 press release, the Postal Service announced that along with the four stamps showing Santa Claus that were revealed last June, the set will include a single-stamp souvenir sheet with a scene showing Santa admiring a note addressed to him from a youngster named Jimmy. The note is held in place on the fireplace mantle by a full glass bottle of Coca-Cola.

The Coke bottle does not appear within the borders of the nondenominated (50¢) forever stamp, which features only Santa’s face from the scene.

The full scene by artist Haddon Sundblom (1899-1976) is one of many created for the Coca-Cola company’s Christmas advertising from the 1930s into the 1960s.

The four forever stamps previously revealed are all derived from Haddon’s work, including another similarly cropped from the scene with Jimmy’s note to Santa.

Sundblom is the man credited with refining the modern image of Santa Claus, according to the Postal Service.

Describing the newly revealed souvenir sheet, the Postal Service wrote: “A quatrefoil design element surrounded by a metallic gold background encloses the scene. The use of gold metallic ink, the flow of the type, and the organic shape of the border are intended to harken back to the graphic style of the first half of the 20th century. Art director Greg Breeding designed the souvenir sheet and the stamps.”

The stamps will be issued Oct. 11 with an 11:15 a.m. first-day ceremony at the Inn at Christmas Place, 119 Christmas Tree Lane, in Pigeon Forge, Tenn.

“The souvenir sheet will only be sold through usps.com or by calling 1-800-STAMP24,” according to the Postal Service.