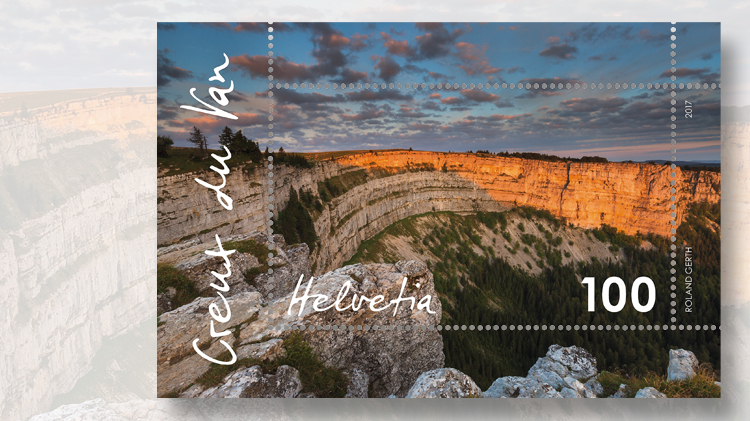 A recent souvenir sheet from Switzerland reproduces a photograph of the Creux du Van rock formation taken at sunrise. 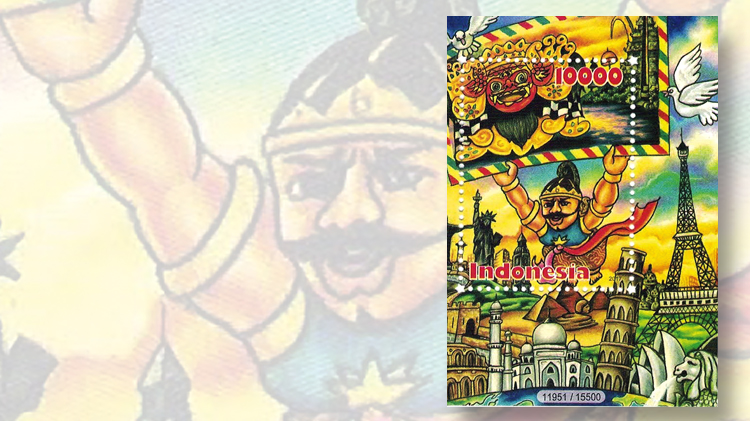 A Postcrossing souvenir sheet from Indonesia shows several worldwide landmarks, including the Statue of Liberty, Taj Mahal and the Eiffel Tower. The sheet was issued July 14. 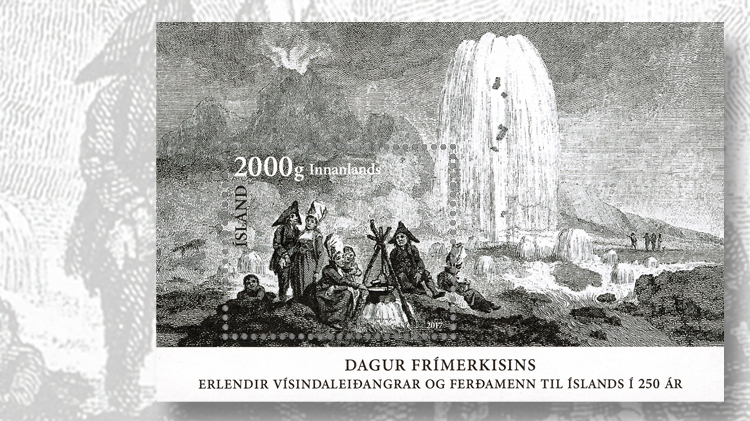 Iceland’s Day of the Stamp souvenir sheet commemorates 250 years of foreign expeditions and travel to Iceland. 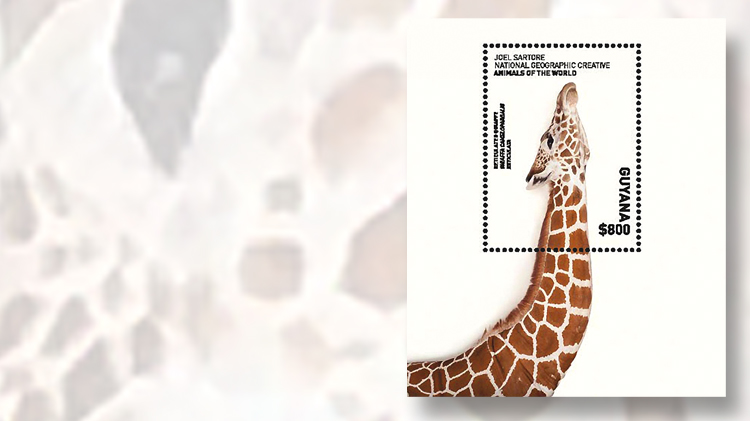 A souvenir sheet from Guyana emphasizes the long neck of a reticulated giraffe. Joel Sartore took the photograph.
Previous
Next

A recent souvenir sheet from Indonesia features famous landmarks of the world, including the Statue of Liberty.

This souvenir sheet was issued July 14 as part of a set honoring Postcrossing, an international project in which people from around the world send each other postcards.

The sheet contains a single 10,000-rupiah stamp with a cartoonlike design showing a man holding a giant postcard and parts of other landmarks, including the tip of one of the pyramids of Egypt, the top of the Leaning Tower of Pisa, and the outstretched arm of the Christ the Redeemer statue in Rio de Janeiro, Brazil.

More landmarks can be found in the selvage surrounding the stamp with the Eiffel Tower, the Sydney Opera House and Singapore’s merlion sculpture on the right, the Taj Mahal in the center, and the Great Wall of China and Rome’s Colosseum on the left.

The Postcrossing set from Indonesia also includes a se-tenant (side-by-side) strip of three 3,000rp stamps. The design of the stamp in the center of this strip is similar to that of the 10,000rp souvenir sheet.

The stamp on the left depicts Indonesian landmarks, and the one on the right shows a girl sitting in a window in the foreground and a volcanic landscape in the background.

Recent souvenir sheets from Switzerland and Iceland show local landscapes. Like the souvenir sheet from Indonesia, each of these sheets features an allover design encompassing the stamp and the surrounding selvage.

The Swiss souvenir sheet issued Sept. 7 presents a panoramic view of Creux du Van, a huge natural rock amphitheater located on the border between the cantons of Neuchatel and Vaud.

In its Focus on Stamps magazine for collectors, Swiss Post calls Creux du Van a “tremendous spectacle of nature,” with rocky walls that rise vertically almost 525 feet from the valley floor.

Focus On Stamps also described how photographer Roland Gerth captured the image shown on the souvenir sheet: “He visited the Creux du Van on various occasions at different times of the year. For this particular photograph he spent the night there in order to capture the east-facing rocky cirque at sunrise. In Gerth’s view, the fact the sky was not completely cloudless on this day contributed to the special beauty of the setting.”

Iceland takes a historic look at travel and exploration on its Day of the Stamp souvenir sheet issued Sept. 14.

According to information from Iceland Post, “In January 1767, a French naval officer, Yves Joseph de Kerguelen de Tremarec, received instructions from Louis XV ordering him to sail to Iceland to assess the needs of French fishermen who were then stationed in Icelandic waters and assist them in matters of health and welfare.”

Kerguelen made a second trip in 1768.

He wrote about these expeditions in Relation d’un voyage dans la mer du Nord (Account of a journey on the North Sea), published in 1771.

The stamp in the souvenir sheet is nondenominated, paying the domestic rate for items weighing up to 2,000 grams (currently 630 kronur).

Iceland Post reports the sheet was designed by Hlynur Olafsson, using an engraving by I. Thortwaithe based on a drawing by I. Ibbetson.

The black-and-white scene on the souvenir sheet depicts a group of men and women in the foreground cooking over an open fire. In the background, a geyser erupts near the center of the design, while smoke pours from a volcano in the upper left.

Known as “The Land of Fire and Ice,” Iceland has more than 200 volcanoes and numerous geysers. Although it rarely erupts now, the most famous of these is Geysir, for which all other geysers are named.

The Lowe-Martin Group of Canada printed the souvenir sheet by offset.

Guyana used the extended format of a souvenir sheet to highlight the neck of the world’s tallest land animal, the giraffe.

Giraffes reach heights of about 14 feet to 19 feet, with about 6 feet of that in the neck alone.

Sartore, who specializes in documenting endangered species and landscapes around the world, is the founder of the Photo Ark, a documentary project to save species and habitat.

This souvenir sheet with an $800 stamp was released April 14. Issued at the same time was a block of four se-tenant $500 stamps showing additional animal photographs by Sartore.