Souvenir sheets and stamps made from wood: Inside Linn's 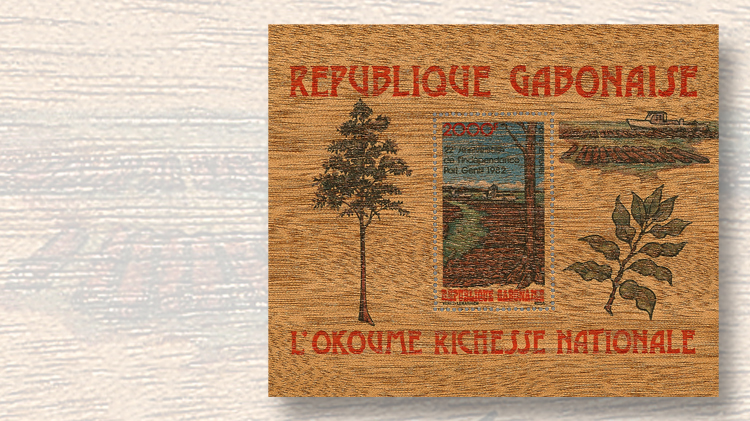 Gabon issued the first wooden souvenir sheet in 1982. In addition to commemorating Gabon’s anniversary, the sheet honors the okoume industry.

The Dec. 25 issue of Linn’s Stamp News just landed on the presses and goes in the mail to subscribers Monday, Dec. 11. Here we entice you with a few previews of exclusive content available only to subscribers. And if you subscribe to Linn’s digital edition, you’re at the head of the line because you get early access Saturday, Dec. 9. To heighten your anticipation even further, we offer three glimpses of what lies between the covers of this issue.

Souvenir sheets, stamps made from oak, bamboo and other types of wood

Wood has been a rare material for stamp printing, even though paper also originates from wood. Feature writer Wayne Chen looks at stamps from around that world that have utilized wood on stamps and souvenir sheets.

Middle East Stamps columnist Ghassan Riachi looks at three airmail stamps issued in 1958 by Syria, while it was part of the United Arab Republic of Egypt. The stamps mark the 10th anniversary of the Universal Declaration of Human Rights.

First-day Covers columnist Lloyd de Vries discusses the different sizes of postmarks that were created by the United States and Canada for the History of Hockey stamps joint issue.

Dragons pictured on British stamps since 1929: Inside Linn's

Postal history of a stamp with a 1 billion plus production run: Inside Linn's