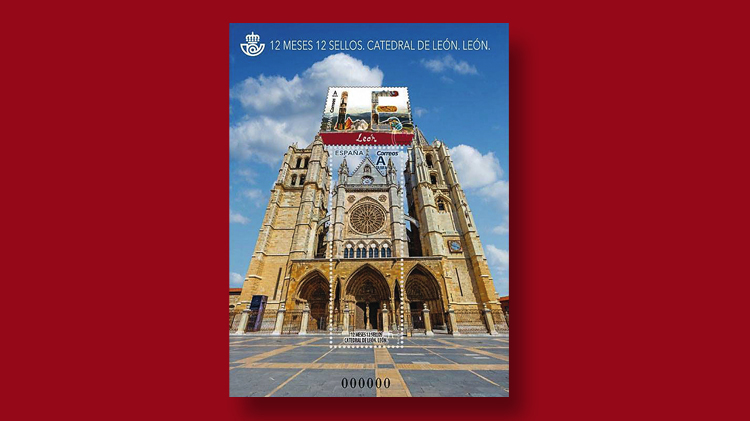 To make amends for showing the wrong cathedral on the Leon stamp, Spain issued this souvenir sheet May 25. 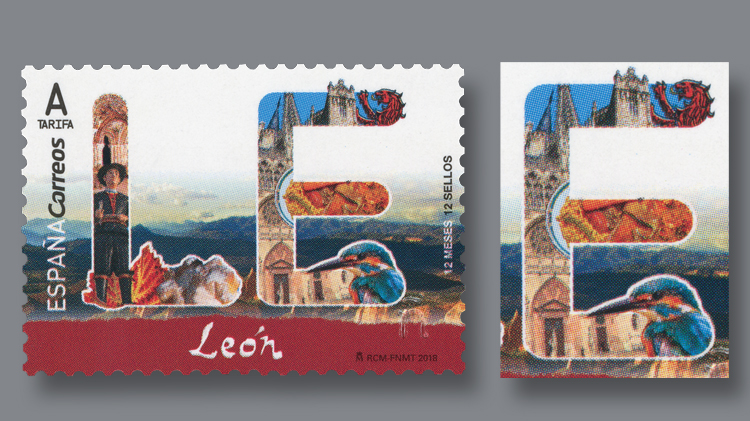 Spain issued a stamp featuring the province of Leon April 2, part of its 12 Months 12 Stamps series. The cathedral shown on the stamp, however, was not the Leon Cathedral.
Previous
Next

Spain’s Correos issued a souvenir sheet in May to correct the design of a stamp issued a month earlier.

Both the stamp and the souvenir sheet are part of the 12 Months 12 Stamps series that highlights a different province each month, in this case the province of Leon.

The nondenominated domestic-rate Leon stamp released April 2 shows various items from food to architecture to landscapes associated with the province inside the letters “L” and “E.” However, missing from the stamp design was the Leon Cathedral, which was inscribed on UNESCO’s World Heritage List in 2011.

According to the English-language website of the newspaper Sur (www.surinenglish.com), the stamp shows another cathedral instead: “The head of Correos has apologised after an eagle-eyed member of the public spotted that a new stamp celebrating the heritage of Leon, including its cathedral, had used an image of the cathedral in Burgos, some 180 kilometres away.”

The brief report continued: “Conscious of the rivalry between Spanish provincial capitals, Javier Cuesta said that it was the first mistake in the 700 commemorative stamps he had overseen and promised to issue another one to make amends.”

Correos made its amends in the form of a souvenir sheet issued May 25 featuring a photograph of the Leon Cathedral with an image of the original Leon stamp on top of it. The single stamp in that souvenir sheet depicts the cathedral’s rose window. The stamp and the pointed glass windows are perforated.

For more information about recent Spanish stamps, contact its philatelic department by email or visit the website.