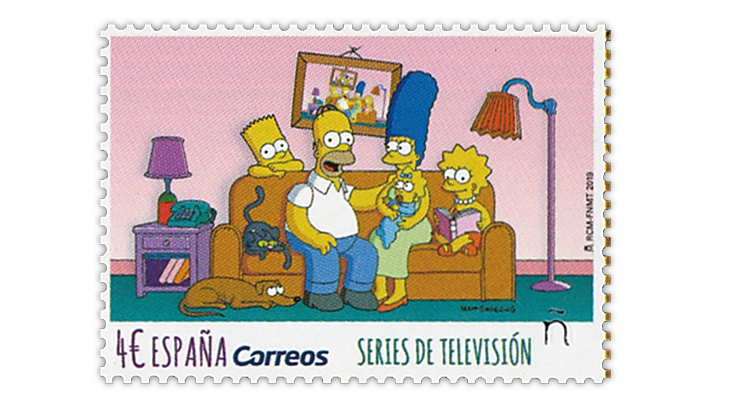 Spain honored the American animated television series The Simpsons on this €4 stamp issued Nov. 4 in a folded souvenir sheet. 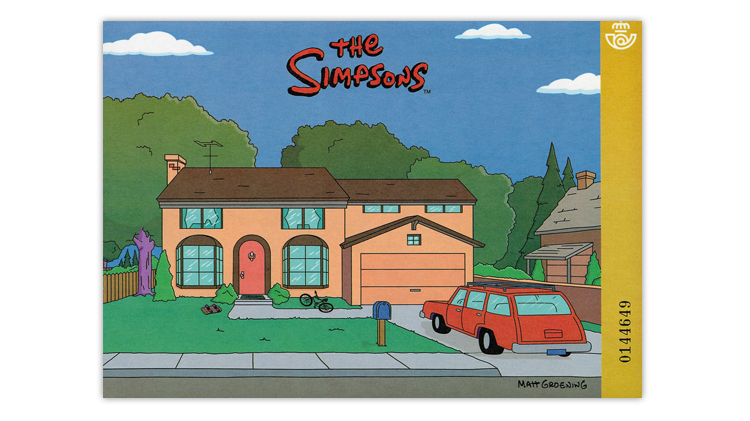 The outside panel of Spain’s souvenir sheet depicts the Simpsons’ house. 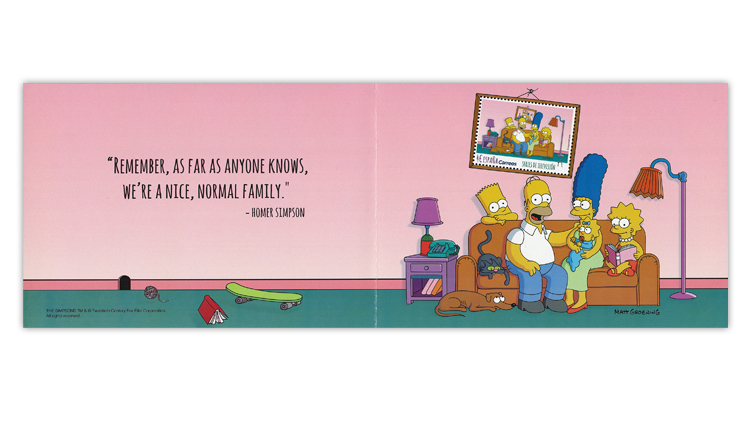 The two interior panels of Spain’s souvenir sheet include a quote from Homer Simpson on the left and an image of the family on the couch on the right. The stamp is incorporated into the picture frame above the couch.
Previous
Next

Spain’s post office, Correos, honored the American animated television show The Simpsons with a souvenir sheet of one issued Nov. 4.

The longest-running American sitcom, The Simpsons debuted Dec. 17, 1989, in the United States. The show about a middle-class family in the fictional city of Springfield also is broadcast in more than 50 countries around the world. In Spain, Los Simpson first aired in 1991.

Spain’s souvenir sheet honoring The Simpsons features the family and their living room couch. The single €4 stamp, which repeats the scene, is placed in the picture frame above the couch.

A different scene of the family assembling around this couch is a staple of the show’s opening sequence. The frame, always hanging askew, normally contains a painting of a sailboat.

In the version of the couch scene on the souvenir sheet, Bart Simpson stands behind the couch. His parents, Homer and Marge, are seated on it as are his sisters, Maggie and Lisa. The family’s cat, Snowball, joins them on the couch, while the dog, Santa’s Little Helper, lies on the floor in front of it.

Correos sells the souvenir sheet folded. The front panel pictures the Simpsons’ home. When opened, the couch scene with the stamp is on the right side. The panel on the left includes a quote in English from Homer Simpson: “Remember, as far as anyone knows, we’re a nice, normal family.”

The stamp, printed on paper with moisture-activated gum, measures 40.9 millimeters by 28.8mm.

For more information on the Spanish souvenir sheet, visit the Correos website.