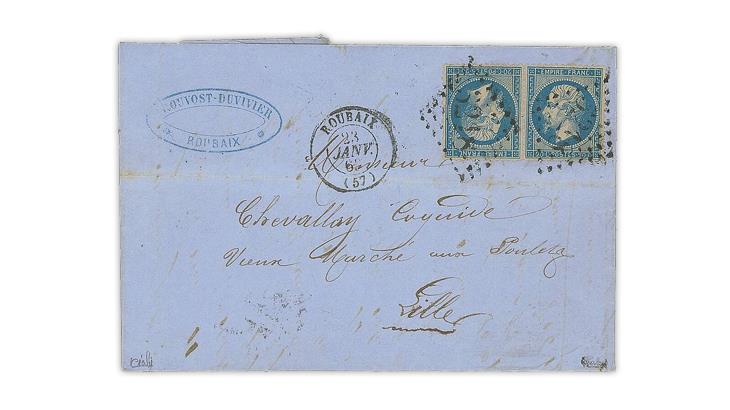 Spink’s Dec. 10 sale of part 7 of the Hermione collection of France will feature this 1863 folded letter franked with a tete-beche pair of the 1862 20-centime blue on bluish paper Emperor Napoleon III. 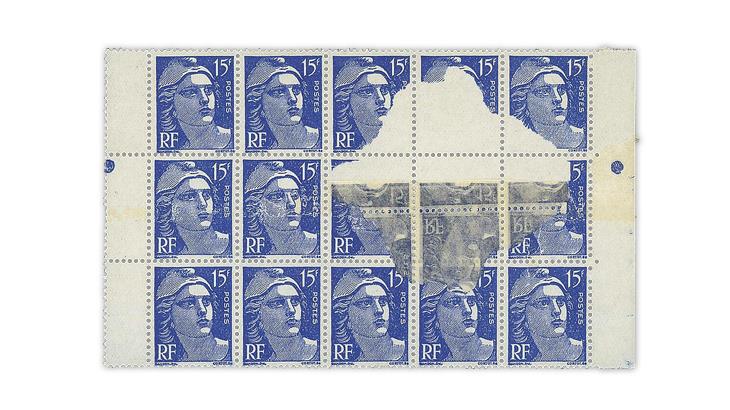 This block of 15 1951 15-franc ultramarine Marianne de Gandon stamps with a dramatic preprinting paper repair is from the specialized collection of the 1945-54 Marianne de Gandon issue that Spink will offer intact Dec. 10 as part 8 of the Hermione collect
Previous
Next

The Spink auction firm will continue its ongoing series of sales of the Hermione collection of France Dec. 10 at the firm’s gallery in London.

Part 7 of the collection includes more than 300 lots of material, beginning with France’s classic issues and continuing through the post-World War II era. Part 8 features a specialized collection of the 1945-54 Marianne de Gandon issue.

In the introduction to the catalogs for each sale, Spink draws parallels between the Lafayette collection of France that was sold in 2003 and the Hermione collection.

Spink observes that the Hermione collection “was gathered patiently and discreetly during more than seventy years of searching, with passion, discernment, a taste for rarity and above all an eye for quality, which is so important in the current market.”

Among the desirable 1862-71 Empire items to tempt bidders in the part 7 sale is a tete-beche (French for “head to tail”) pair of the 1862 20-centime blue on bluish paper Emperor Napoleon III (Scott 26a) stamp used on a folded letter mailed Jan. 23, 1863, from Roubaix, France, to Lille. Each stamp is tied to the letter with a “3218” gros chiffres (large numbers) lozenge cancel of Roubaix.

Spink states the cover has been signed by noted France and colonies expertizer Roger Calves. The cover also has a horizontal filing fold that passes just beneath the stamps, according to Spink.

Collectors of production freaks will find eye-catching items scattered among the lots of normally printed single stamps and multiples.

One such dramatic freak is an unused single of the 1900 1-franc claret and olive green Liberty and Commerce (Scott 125) with a large paper fold that occurred before perforation, leaving the bottom right corner of the otherwise normally printed stamp without perforations.

Part 8 of the Hermione collection, the specialized collection of the 1945-54 Marianne de Gandon issue, is to be sold as a single lot in accordance with the owner’s wishes, according to Spink.

This particular Marianne issue is named after its designer, Pierre Gandon. In the catalog introduction, Spink describes the collection as being “arguably the most complete of this issue ever assembled.”

Various freaks and oddities abound in the collection, including a mint never-hinged block of 15 of the 1951 15fr ultramarine Marianne de Gandon (Scott 653) “with incomplete impression due to officially repaired paper,” according to Spink.

The repair, which was made before the stamps were printed and is still affixed to the front of the block, resulted in incomplete impressions of six of the 15 stamps. The block is signed by Roger Calves.

Separate catalogs for the part 7 and part 8 sales of the Hermione collection of France are available as downloadable PDF documents. Online bidding options are available after registering in advance with the firm.