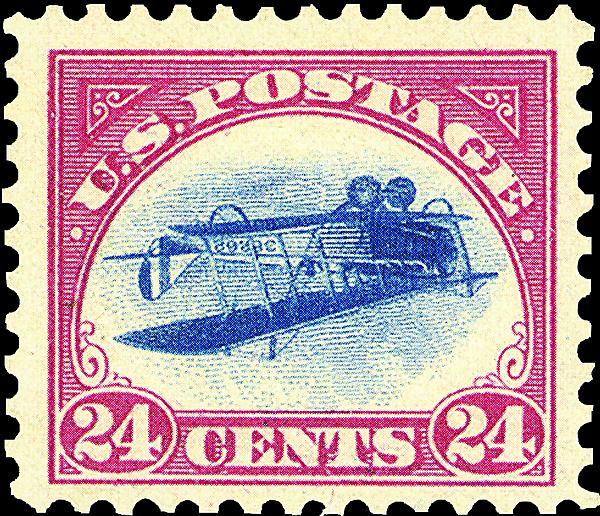 A never-hinged mint example of the 1918 24¢ Jenny Invert airmail error will be offered at auction May 21 by Spink USA.

The stamp, from position 77 of the only existing pane of 100 error stamps, is described by Spink as the finest of five recorded mint never-hinged examples. That description is supported by a 2014 Philatelic Foundation certificate assigning the stamp a grade of very fine-extremely fine 85, “the highest graded mint never hinged example,” according to Spink.

The stamp is shown in the single-item auction catalog with a value of $1,000,000. That is the value assigned for a mint never-hinged example with the lesser grade of very fine 80 in the 2014 Scott Stamp Values — U.S. Specialized by Grade listings in the Scott Specialized Catalogue of United States Stamps and Covers.

Spink describes the stamp as being in impeccable condition, “featuring a beautifully rich and colourful print upon clean crisp paper, complete with original gum.” The stamp is from the J.E. Safra holding and was acquired in the Feb. 2, 1994, Christie’s auction of the Westport collection.

The price paid for the stamp then was $173,000 plus a $19,800 buyer’s premium. The stamp was previously in the collections of Col. Edward H.R. Green, Frederick H. Douglas and J.A. Graves.

The auction catalog and details about live Internet bidding can be viewed online at www.spink.com/files/catalogue/149.pdf.