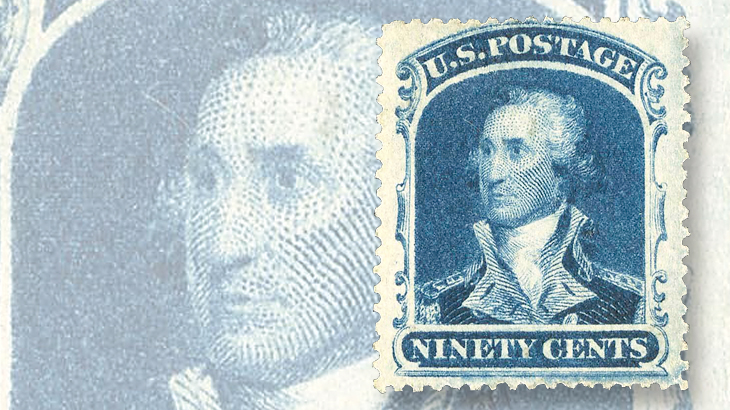 The first day of the sale consists of United States and its possessions, with classic U.S. stamps and material from the back of the book.

Among the offerings of the 1857-61 issue is an example of the top denomination from the series, the 90¢ blue George Washington (Scott 39). This nicely centered unused lightly hinged example has original gum, and is described as presenting a rich color and crisp impression. It is accompanied by a 1993 Philatelic Foundation certificate and a 2012 certificate from Professional Stamp Experts.

The stamp is listed with an estimate of $3,000, matching the value for the unused 90¢ stamp as it appears in the 2015 Scott Specialized Catalogue of United States Stamps and Covers.

The second session on Wednesday opens with grilled National Bank Note stamps of the 1870-71 series, including the 10¢ brown Thomas Jefferson with H grill (Scott 139), described as “a rare mint example with part o.g. [original gum], strong rich color and crisp impression, the grill is typically light but shows outer side edge rows of points at the top of the head on front and back, fine centering.” The stamp has a 1986 Philatelic Foundation certificate and lists at the Scott catalog value of $7,000.

Duck stamp collectors will find a nice selection of plate blocks from the 1940s into the 1960s, along with some singles and groupings.

Artwork signed by Henry K. Bencsath for a number of United Nations stamps from the 1960s and 1970s is being offered, plus an intriguing selection of Pitney-Bowes postage meter test stamps.

Worldwide stamps and postal history in this sale provide a diverse selection that is strong in Canada and British Commonwealth but nicely representative in several other areas.

Two examples of the beautiful 1882 £5 bright orange on white paper Queen Victoria stamp (Scott 93) are offered, one unused and the other used. The unused stamp is described as having “full clean original gum showing only the faintest trace of possible hinging,” while the used stamp is neatly struck with a Glasgow cancel dated “FE 21 94.”

For information or to view the auction lots and descriptions online, visit the Spink website.