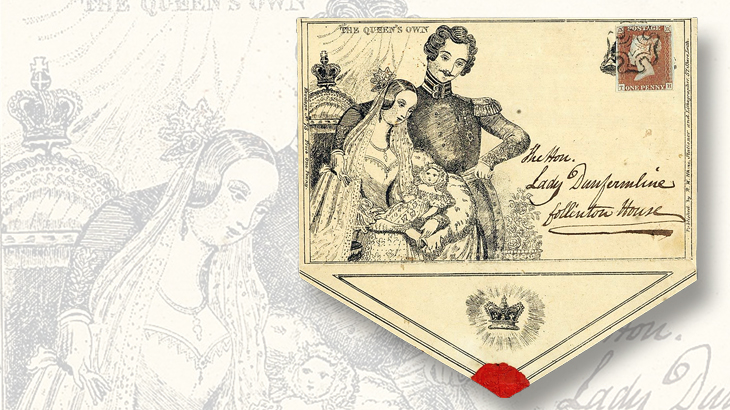 A very rare illustrated envelope (one of two known) in “exceptionally fine” condition, depicting Queen Victoria and consort Prince Albert with their infant, realized $19,400 at the Spink sale in London in April. 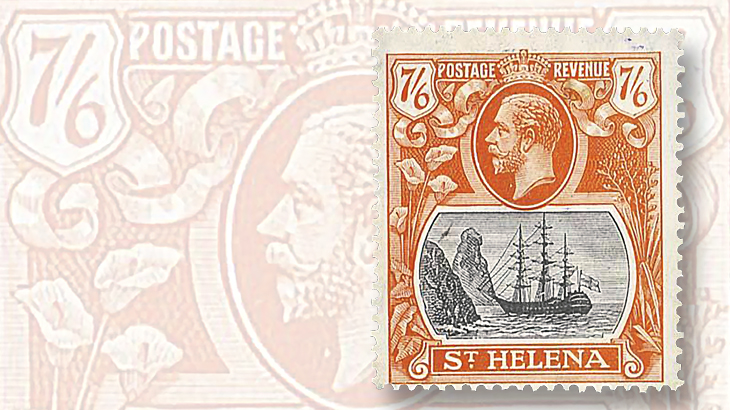 A 7-shilling, 6-penny St. Helena stamp with an elusive plate flaw that makes the mast appear broken in the Badge of the Colony design brought $22,960 at Spink’s April sale. 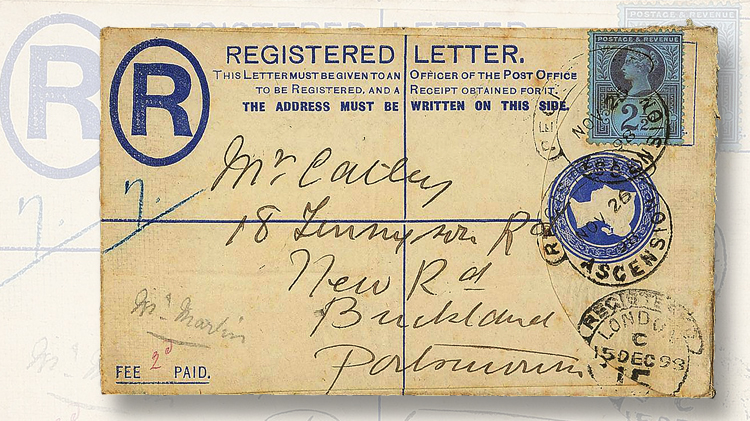 Said to be one of only two known covers with this hooded-circle “Registered/Ascension” postmark, this 1898 registered cover from Ascension was hammered down for $12,360 by Spink in London in late April.
Previous
Next

An 1898 registered cover sent from the island outpost of Ascension, in the south Atlantic, comprised a Great Britain 2-penny registered envelope uprated with a Queen Victoria 2½d stamp of the 1887 Jubilee series (Scott 114).

Said to be one of just two covers (plus an off-cover stamp) known with that type of hooded-circle “Registered/ Ascension” postmark, it fetched the equivalent of $12,360.

A 7-shilling, 6-penny St. Helena stamp from the 1922-1927 Badge of the Colony issue, with an elusive plate flaw in which the ship’s main mast seems to be severed (variety of Scott 92; listed in the Stanley Gibbons catalog as 111da), was offered in “fine” mint condition. It sold for $22,960.

An intricately illustrated envelope in “exceptionally fine” condition, depicting Queen Victoria and consort Prince Albert with their infant in her arms, was franked with a Penny Red (Scott 3) tied by a Maltese cross cancel and addressed to one Lady Dunfermline.

Considered a rarity among the highly desirable genre of Victorian illustrated envelopes, the cover was said to be one of just two known of this type, unlisted by one of the main reference works on 19th-century pictorial envelopes. It sold for $19,400.