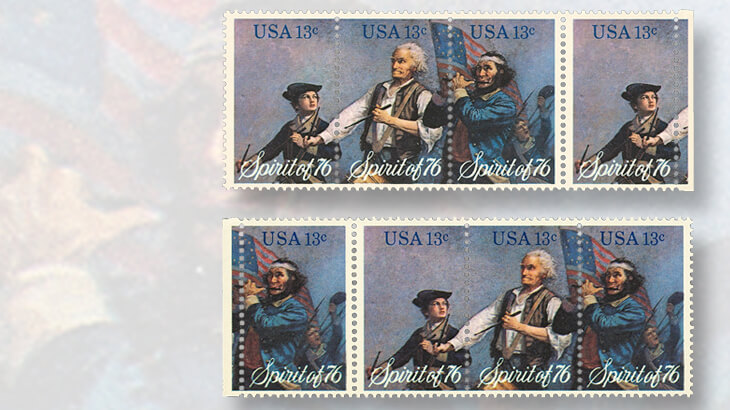 One of the more attractive and innovative stamp issues for the bicentennial of the United States in 1976 was the Spirit of ‘76 triptych (Scott 1629-1631).

A triptych is defined as three parts of a single picture, divided into three panels.

This example pictures a painting by Archibald M. Willard that symbolizes the spirit of the American Revolution. Willard’s painting was first exhibited in 1876 at the Centennial Exposition in Philadelphia. The original painting is now on display in Abbot Hall in Marblehead, Mass.

Four panes of 50 made up a production sheet of 200, two panes across by two panes vertically. Each pane includes 15 strips of three and five single stamps.

On the left hand panes, the extra stamp is the first stamp of the triptych showing the drummer boy, and it is found in the 10th vertical row of the pane.

On the right hand panes, the extra stamp is the third of the triptych picturing the fifer, and it is found in the first vertical row. In both cases, the margins attached to the single stamps end in a white space that is not present with the stamps in the group of three. The Scott catalog does not list these two varieties.

In my opinion, a collection of these stamps should include the strips of three with the two single stamps with margin attached.

As to the figures themselves shown in the painting, they were painted based on models. The painter said that his father, the Rev. Samuel R. Willard, was the model for the drum-tapping figure in the center.

A Civil War friend of his, Hugh Mosher, represented the fifer, and a military prep school student by the name of Henry Kelsey Devereux posed as the drummer boy. He was the son of Gen. John Henry Devereux of Cleveland, Ohio.

None of these people was alive when the painting appeared on the stamps. Young Devereux was born in 1859, and passed away in 1932.