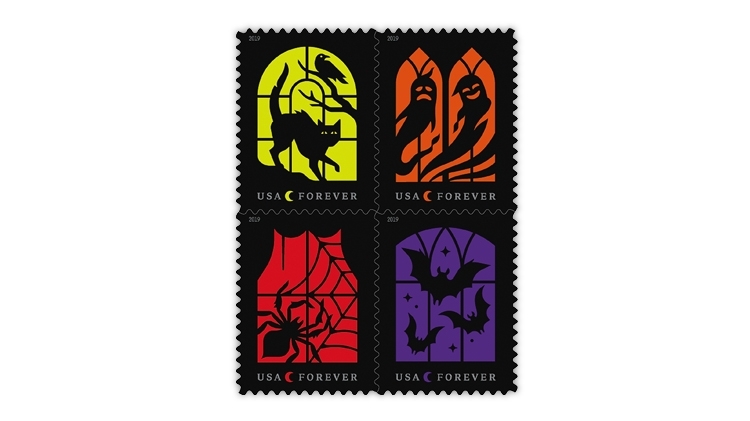 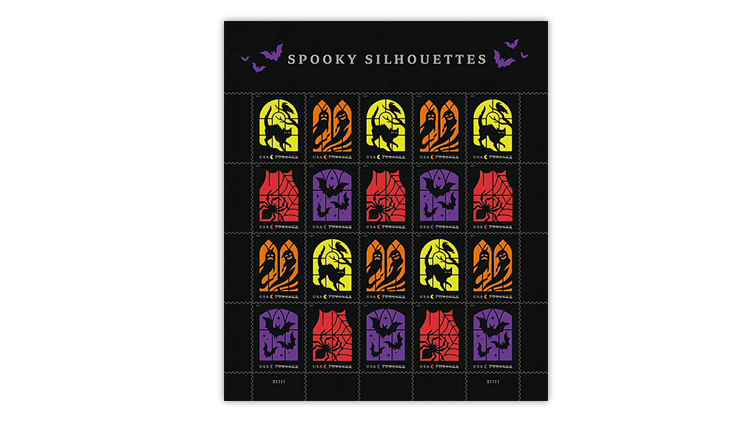 The Spooky Silhouettes stamps will be issued in a pane of 20, with the four stamp designs each repeated five times in the pane. 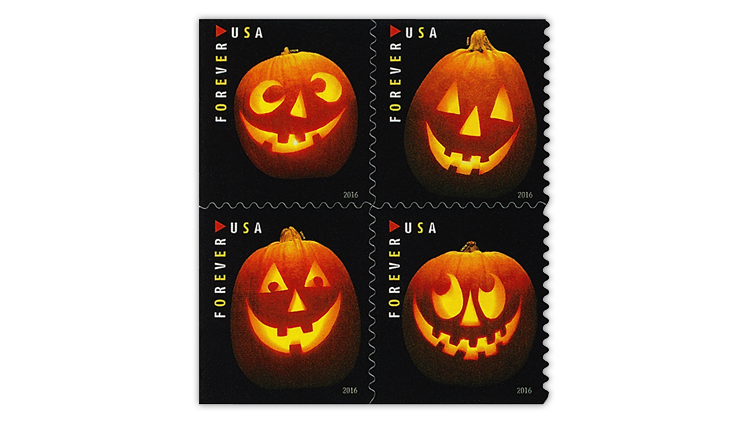 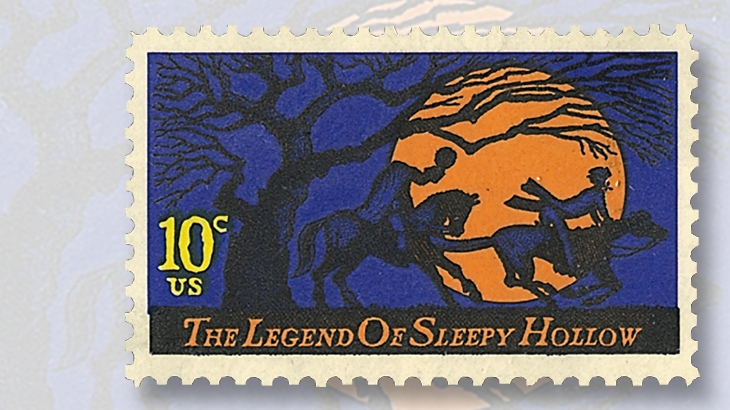 A Legend of Sleepy Hollow stamp was issued in 1974, “in time for the stamps to be used with Halloween cards,” the Postal Service noted.
Previous
Next

The United States Postal Service is turning on the special effects for its 2019 Halloween stamp issue.

The nondenominated (55¢) Spooky Silhouettes forever stamp set of four will be issued Oct. 11, just in time to mail Halloween greetings.

The stamps are being printed by flexography using rainbow foil, according to technical details published by the Postal Service on Sept. 12.

A description in the Fall 2019 issue of USA Philatelic, the Postal Service’s mail order catalog, adds that “Beneath the ink of each image lies a layer of iridescent pigment.”

The four images show spooky scenes captured as silhouettes through Gothic style windows. On the first stamp, an arched window frames a raven on a bare tree branch with a black cat below against a yellow sky background.

Two cathedral style windows show wispy ghost figures, one sad and one smiling. Behind them is an orange tint.

On the third stamp, a window with heavy curtains reveals a giant spider approaching its web. The background is a deep glowing red.

Below each illustration are the inscriptions “USA” and “FOREVER” separated by a waning crescent moon printed in the same color as the background of the scene.

Each stamp is repeated five times on the pane of 20, with two designs alternating in each horizontal row. In a large margin across the top of the pane are the words “SPOOKY SILHOUETTES” in gray, with three purple flying bats on the left and right sides of the banner.

Postal Service employees have been directed not to split these panes to sell stamps individually.

“Halloween has long been a holiday that lets us delight in the things that scare us,” the Postal Service said in its description of this issue. “As autumn approaches, these new stamps offer fun, frightful scenes that symbolize this annual celebration.

Forty million stamps are being printed and processed by USPS contractor Ashton Potter using the Gallus Arsoma EM 410 flexo press. The Spooky Silhouettes set is the first U.S. stamp issue printed on this press, according to USPS published records.

The Spooky Silhouettes set is the second U.S. stamp issue specifically prepared for Halloween. A set of four Jack-o’-Lanterns stamps (Scott 5137-5140) was issued Sept. 29, 2016, in a double-sided pane of 20, which the Postal Service calls a booklet.

Some collectors also like to point to the 10¢ Legend of Sleepy Hollow stamp issued Oct. 10, 1974, as having a Halloween theme (Scott 1548). The classic story by Washington Irving has been closely tied to the spooky holiday.

In its Philatelic Release No. 35 announcing the Legend of Sleepy Hollow stamp, the Postal Service said, “Nationwide distribution will be made in time for the stamps to be used with Halloween cards. Letter carriers deliver large numbers of Halloween cards each year.”

The first-day ceremony for the Spooky Silhouettes stamps will take place at 5 p.m. Friday at Emerson Park Stage, 6 Mount Vernon St., in Milford, N.H., as part of the Oct. 11-13 Milford Pumpkin Festival.

Marc McCrery, vice president of mail entry and payment technology, will represent the Postal Service at the event.

The Postal Service encourages ceremony attendees to register online. The event is free and open to the public.

For many Americans, the Oct. 31 Halloween holiday is a lighthearted celebration of the fear inspired by supernatural evil, just before the redeeming feast of All Saints’ Day on Nov. 1.

The holiday characterizes the conflict of good and evil, as neighbors hand out candy or other treats to costumed children going door-to-door on Halloween night, while the threat of pranksters and vandals playing their tricks looms as well.

The spooky creatures on the new stamps are often depicted on holiday decorations as participating families prepare for the young and enthusiastic costumed visitors.

Halloween expands the field of holiday stamps issued by the U.S. Postal Service since the first Christmas stamp in 1962 (Scott 1205).

Love stamps are usually made available for the mailing of Valentine’s Day cards, and Celebration stamps have been issued for other occasions.

The Postal Service has plans to offer one or more pictorial first-day cancels in association with the Spooky SIlhouettes stamps, but the designs were not yet revealed as the Oct. 7 issue of Linn’s was going to press.