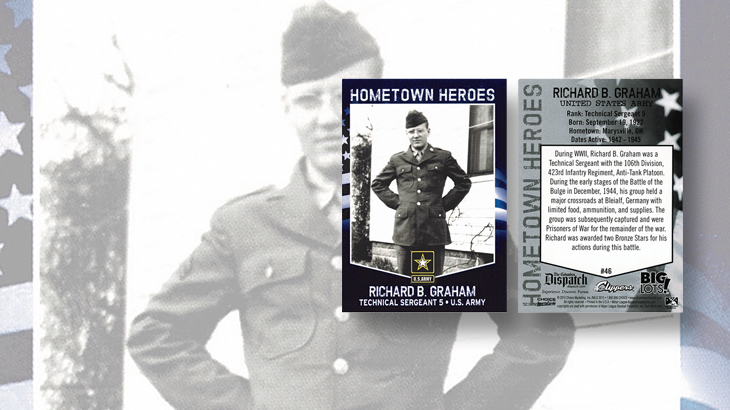 Longtime Linn’s Stamp News columnist and postal history expert Richard B. Graham has been honored on a sports card distributed in Columbus, Ohio, where Graham, lived, studied and worked.

The card is one of 24 recognizing Columbus-area veterans in a 2015 promotion sponsored by the Columbus Clippers AAA baseball team and other local businesses.

Fans attending the July 4 Clippers game against the Toledo Mud Hens received a set of the cards.

Graham is pictured in uniform on the front of the card, which is captioned “Hometown Heroes.”

On the reverse is a citation that reads, “During WWII, Richard B. Graham was a Technical Sergeant with the 106th Division, 423rd Infantry Regiment, Anti-Tank Platoon. During the early stages of the Battle of the Bulge in December, 1944, his group held a major crossroads at Bleialf, Germany with limited food, ammunition and supplies. The group was subsequently captured and were Prisoners of War for the remainder of the war. Richard was awarded two bronze stars for his actions in this battle.”

Graham’s son Tom provided the card to the U.S. Philatelic Classics Society, which reported the details in the February 2016 issue of the society’s biannual publication, The Chairman’s Chatter.

According to the Classics Society report, Graham’s widow Doris represented him at the event “and stood proudly on the first-base line during the ceremony as members of the Army’s Golden Knights parachuted into the stadium.”