Spotting a U.S. modern postal history diamond in the rough in my mailbox 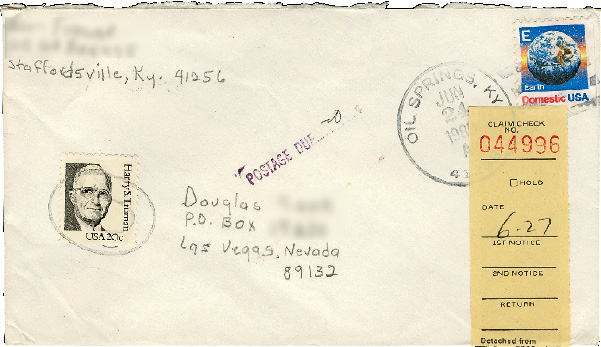 Figure 4. A 20¢ Harry Truman stamp from the Great Americans series was used to pay the postage due on this cover mailed June 24, 1988, from Oil Springs, Ky., to Las Vegas. 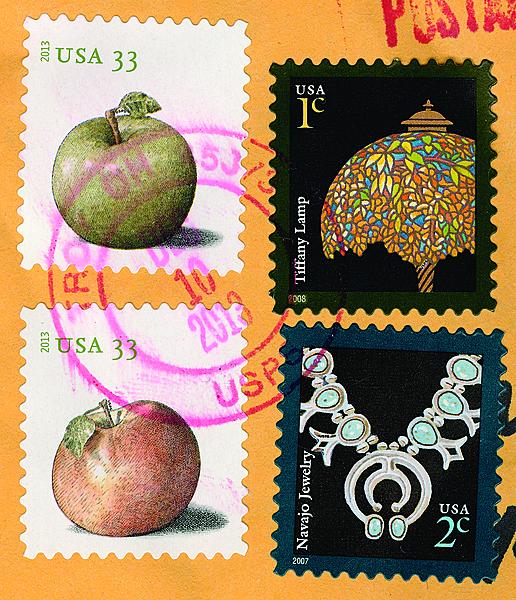 Figure 3. Receipt of payment of 69¢ postage due for the Figure 1 parcel is indicated by the four stamps affixed. A Dec. 10, 2013, Troy, Ohio, postmark was used to cancel the stamps. 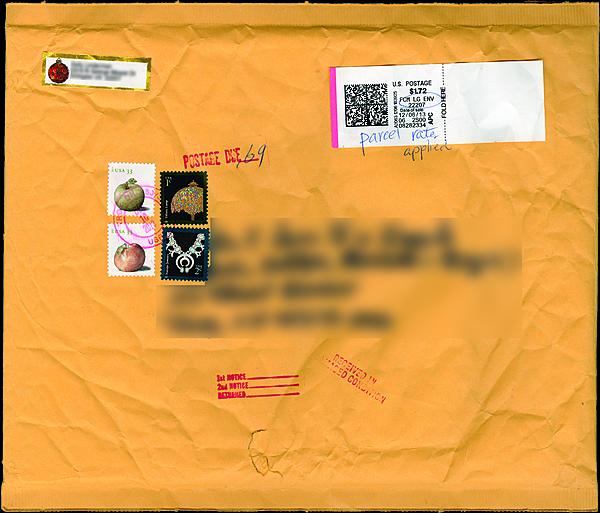 Figure 1. When author Charles Snee received this parcel in early December 2013, the four United States stamps at left were not on the envelope. He explains how they got there.

The large envelope shown in Figure 1 (on page 54) was mailed to me and my family in Troy, Ohio, in early December 2013.

It was from my dear aunt, and it contained an official 2013 White House Christmas tree ornament housed in a decorative box.

When the envelope was pulled from our mailbox, the quartet of stamps affixed at left that partially obscures the mailing address was not there.

This story explains how those stamps came to be used.

Scanning the cover, I noticed the computer-vended stamp (Scott CVP85a) that was used Dec. 6 to pay postage of $1.72.

The “FCM LG ENV” below the postage amount indicates that the stamp was used on a large envelope classified as first-class mail.

However, an observant postal clerk (probably at the Troy post office) wrote “parcel rate applied” just below the square barcode indicium on the stamp.

An enlargement of the computer-vended stamp, shown in Figure 2, reveals that the handwriting from the clerk ties the stamp to the envelope.

The postal clerk’s docketing indicates that the contents of the envelope required it to be treated as a parcel, because the box containing the ornament was rigid and made the envelope more than one-fourth of an inch thick.

As such, postage due of 69¢ was assessed when the parcel arrived in Troy, as indicated by the red “POSTAGE DUE” handstamp.

Using the “Postage Price Calculator” at usps.com, I determined that postage of $2.41 was required for a rigid, non-machinable first-class parcel weighing 5 ounces.

With this background story told, let’s return to the four stamps that weren’t on the envelope when it arrived at my home.

As a collector of modern U.S. postal history, I recognized a hidden gem — an opportunity to transform a rather nondescript parcel cover into something a bit more appealing.

For perspective, the United States Postal Service produced its last postage due stamps in 1985.

Their use on mail ceased not long after that.

Today, when postage due is required, you pay the amount indicated, and the postal clerk hands you a receipt in return.

Had I taken this route, there would have been no overt indication on the envelope that I had, in fact, paid the 69¢ owed.

But to paraphrase a famous Robert Frost poem, I took the philatelic road less traveled, and that made all the difference.

On Dec. 10, parcel in hand, I went to the Troy post office and explained to one of the collector-friendly clerks that I wanted to buy 69¢ in stamps and then affix them to the parcel to evidence payment of the postage due.

In effect, the stamps would serve as my receipt, instead of the standard paper receipt from the register.

A single strike of a red Troy, Ohio, double-outline circular datestamp, shown in the Figure 3 close-up, canceled the stamps, thus completing the transaction.

The use of postage stamps to document payment of postage due is not uncommon. I’ve a handful of such covers in my collection, one of which is illustrated in Figure 4.

The cover, sent from Kentucky to Nevada, was postmarked June 24, 1988, in Oil Springs, Ky.

This unincorporated town in the eastern part of the state has had its own post office.

The sender applied a nondenominated (25¢) E-rate Earth booklet stamp (Scott 2282) and sent the envelope on its way to Las Vegas. When it arrived, 20¢ postage due was assessed, likely because the contents weighed more than 1 ounce. At that time, the basic 1-ounce first-class rate was 25¢; an additional ounce required 20¢.

Receipt of payment is shown by the 20¢ Harry Truman stamp (Scott 1862) from the Great American series affixed to the left of the mailing address.

A mute oval registry cancel ties the Truman stamp to the envelope.

As for the cover that got this story rolling, it’s not likely the Troy postmaster would have come knocking at my door for 69¢, had I decided not to pay the postage due.

But honesty demanded otherwise, and I had no intention of foregoing the chance to add an attractive piece of postal history to my collection. ¦