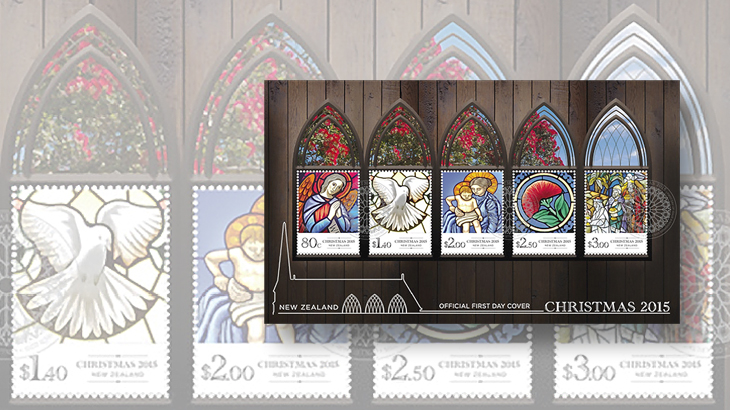 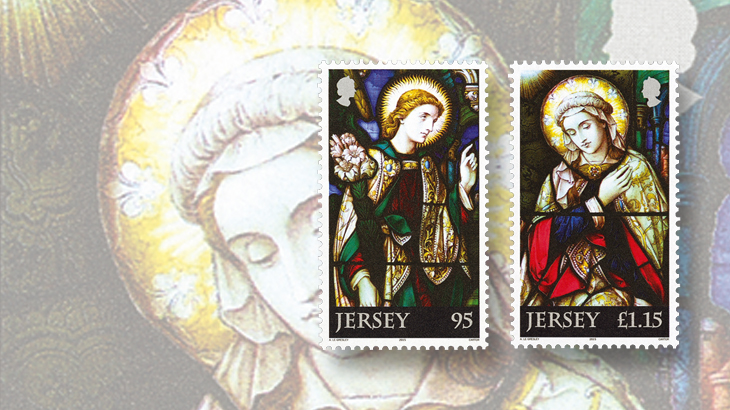 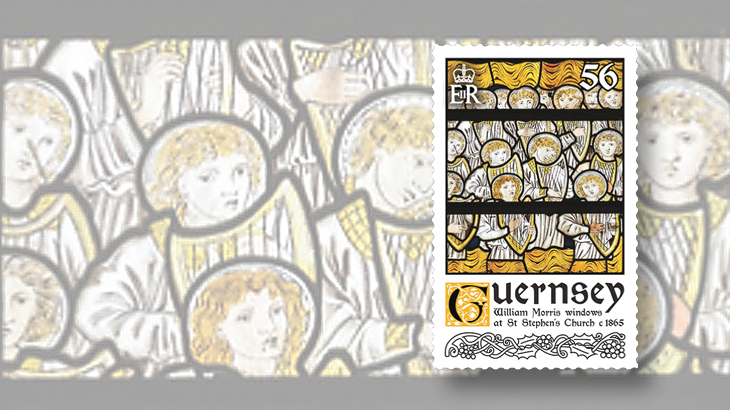 The 56-penny stamp in Guernsey’s set of seven Christmas stamps shows angels sitting above the kingdom of heaven, a detail from a William Morris stained glass window. 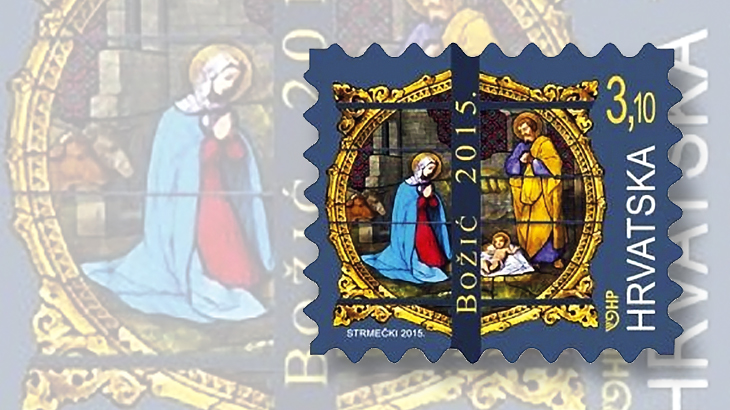 A Christmas stamp from Croatia pictures a Nativity scene from a stained glass window in Zagreb Cathedral. 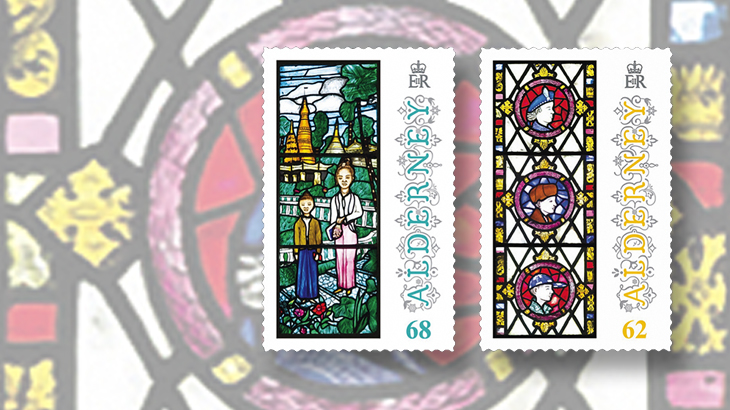 A half dozen postal entities pictured stained glass windows on their 2015 Christmas stamps.

In alphabetical order, they are Alderney, Brazil, Croatia, Guernsey, Jersey and New Zealand. Guernsey Post issues stamps for both Alderney and Guernsey.

The seven stamps issued Nov. 6 for Alderney picture scenes from a stained glass window in St. Anne’s Church on the island.

The 42-penny stamp shows Jesus blessing children, and the other stamps picture children from different parts of the world.

For example, the 62p stamp shows profiles of three children: a Scottish girl and boys from Canada and the United States. The 68p stamp depicts children from Burma (now known as Myanmar).

In 1957, this stained glass window was dedicated to Anne French. Guernsey Post said: “For our Alderney Christmas stamps we have chosen to focus on someone who dedicated her life to helping children. Through her unwavering support and work with children in Alderney and overseas, Anne French epitomizes the true meaning of Christmas.”

Guernsey’s seven Christmas stamps show stained glass windows in St. Stephen’s Church in St. Peter Port. The windows, which picture scenes from the New Testament and of heaven, are the work of William Morris, who established Morris & Co. in 1861.

The company describes its founder, William Morris (1834-1896), as "the greatest designer and one of the most outstanding figures of the Arts and Crafts Movement. He was also a poet, artist, philosopher, typographer and political theorist.”

Brazil’s Christmas souvenir sheet was pictured in the New Stamps of the World column in the Dec. 28, 2015, issue of Linn’s. A stained glass window is shown across the sheet. However, it is not a specific stained glass window; instead it is simply an image created as a design element.

Brazil’s Correios said, “Each of the stamps has, on the background, ornate stained glass windows in vivid colors, conveying an atmosphere of peace, devoutness and brotherly endearment.”

Croatia’s Christmas stamp issued Nov. 25 depicts the Nativity as portrayed on a stained glass window in the sanctuary of Zagreb Cathedral.

According to Croatian Post, the window was created in the 1840s in Munich by artists who also worked on windows for cathedrals in Regensburg, Koln, Glasgow and St. Petersburg.

The 3.10-kune stamp is available in two versions: with moisture-activated gum in panes of 20, and as a self-adhesive in booklets of 10.

Melanie Gouzinis, head of philately for Jersey Post, said: “Bosdet was born in Jersey in 1856 and became famous for his stained glass windows. His work is celebrated as being exquisite and outstanding, not just for its richness in colour, but also for the balance of composition and quality of drawing in the portrayals of religious characters.”

The stamps in Jersey’s Christmas set represent the Annunciation, when the archangel Gabriel announced to Mary that she would give birth to a son who would be named Jesus.

The designs depict pairs of stained glass windows, one showing Mary and one showing Gabriel, from the parish churches of St. Martin, St. Helier, St. Brelade and St. Saviour.

The stamps are denominated at Jersey’s special reduced Christmas rates that were in effect from Nov. 27 through Dec. 11.

New Zealand Post added a special touch to its Nov. 4 Christmas issue with a translucent die-cut souvenir sheet that is “designed to replicate a real stained glass window.”

Hannah Stancliffe-White, the designer of the issue and a visual communications specialist at New Zealand Post, said: “I’m always looking to push the envelope with the issues I design and I saw this as the perfect opportunity to try something new while still bringing value and collectability to the stamps.”

The souvenir sheet includes five stamps with moisture-activated gum picturing details from stained glass windows. Also, three of the stamps, the 80¢, $2 and $2.50 denominations, were issued as self-adhesives in booklets of 10.

The $2.50 stamp shows pohutukawa, an evergreen that produces bright red blooms around Christmas (summer in New Zealand), from a stained glass window in the Christchurch Hospital Nurses Memorial Chapel.