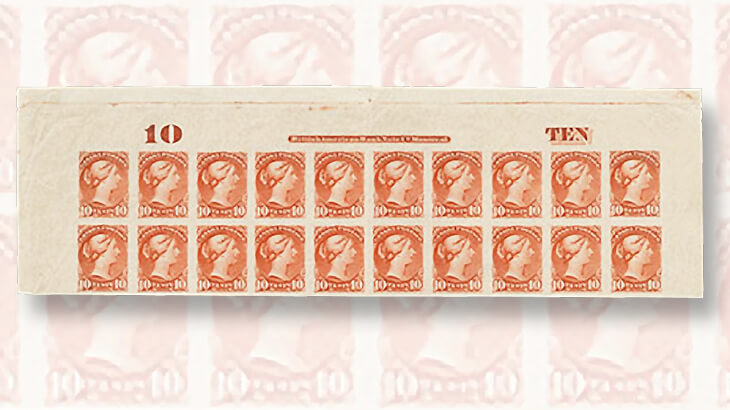 Brigham Auctions offered the Small Queen series of 1870-97 definitive stamps from Ron Brigham’s collection in an April sale. The top item was a unique imperforate, top-margin, plate-imprint strip of 20 of the 10¢ denomination from the 1897 Ottawa printing 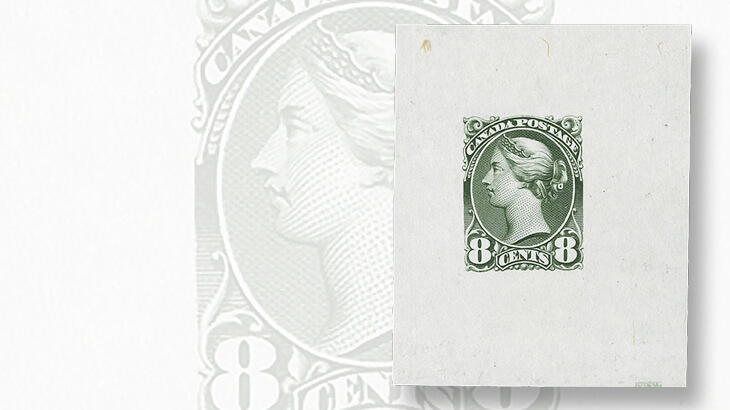 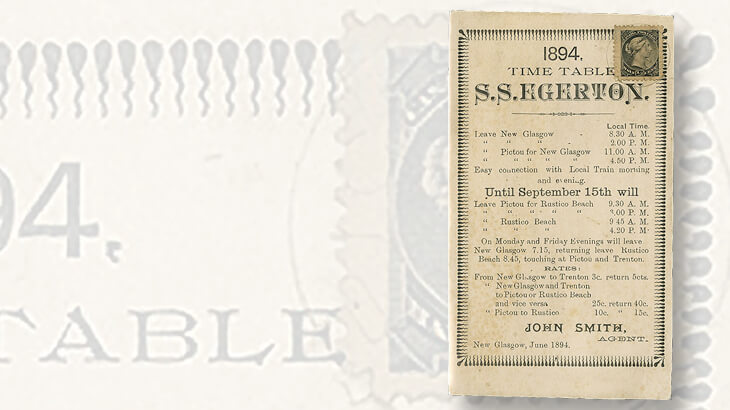 One of few printed-matter uses known of the Small Queens, an 1894 railway timetable franked with the ½¢ definitive was sold for about $770 at the Brigham auction in April. 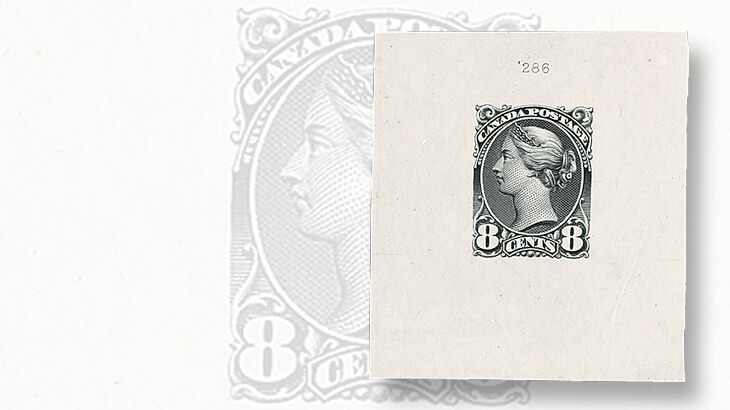 From the Brigham sale in April, this large die proof of the 1893 8¢ Small Queen in slate black, from the hardened die, sold for $15,450.
Previous
Next

Brigham Auctions, located in the Toronto suburb of Brampton, Ontario, held another of its continuing series of sales to disperse the extensive Canada collection of its owner, Ron Brigham.

The latest installment, on April 16, comprised the Small Queen series of definitive stamps issued between 1870 and 1897. The sale was previewed in Linn’s issue of April 11.

Brigham’s Small Queens won multiple awards at the national and international level when he exhibited them, showcasing not just the stamps themselves but essays, proofs, errors, varieties, and postal history that illustrates how the stamps were used.

The Small Queens series is fascinating for philatelists because during the 27 years it was current, it went through numerous printings in Montreal and Ottawa, on a variety of papers and in many shades of color.

The top item in the auction was a dramatic imperforate, top-margin, plate-imprint strip of 20 of the 10¢ denomination from the 1897 printing in Ottawa (Scott 45c).

Described as unique and with only a few negligible creases and wrinkles, the stunning item was hammered down for Canadian $32,500, or about $29,600, including the 15 percent buyer’s premium Brigham adds to all lots.

The next biggest attention-getters were proofs of the 8¢ value (Scott 44), a latecomer to the series in 1893. Trial color proofs in dull green and bright blue sold for about $14,500 and $19,100, respectively, while large die proofs in grey and slate black (both issued colors) brought $17,300 and $15,450; the latter was from the hardened die, with the number “286” added over the vignette. Other die proofs did well throughout.

Among postal history lots in the Brigham sale of Small Queens were some striking and unusual uses. The ½¢ denomination is the trickiest to find on cover, particularly as a solo use; only a few instances of printed-matter rates called for such a low amount of postage, and such items were seldom saved by their recipients, as letters were.

An 1894 railway timetable for the area around Pictou, Nova Scotia, bearing a ½¢ Small Queen (Scott 34) neatly tied by a light circular date stamp paid the rate for unaddressed mail to every household in a given district. It sold for about $770.