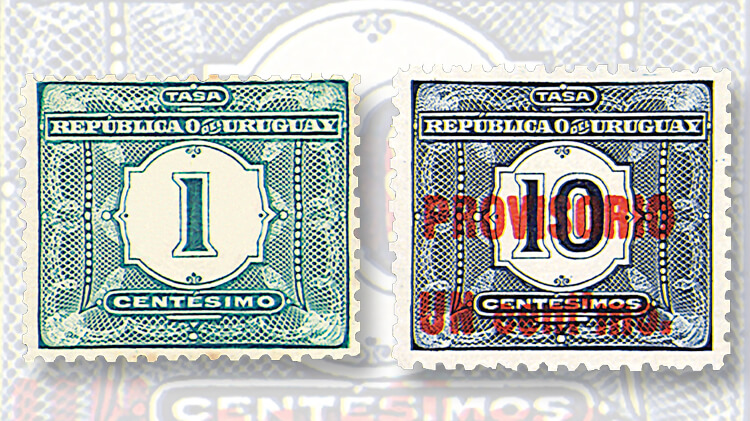 Uruguay introduced postage due stamps in 1902; some of them were surcharged in 1904 to meet existing postal rates. 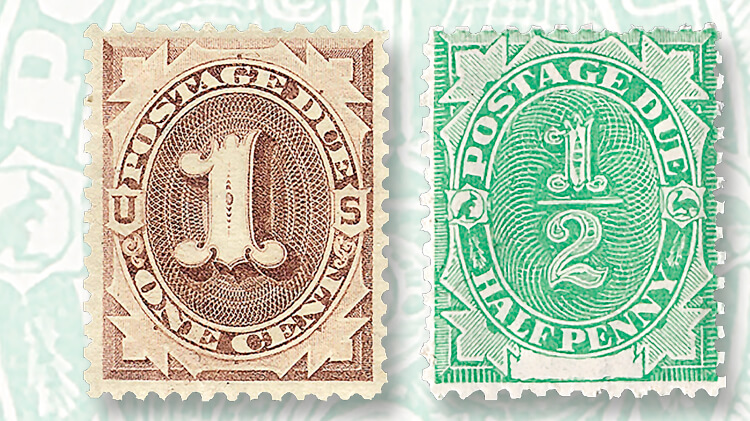 The United States’ first postage due stamps were issued in 1879. Australia’s first dues, in 1902, employed a similar design of an embellished numeral. 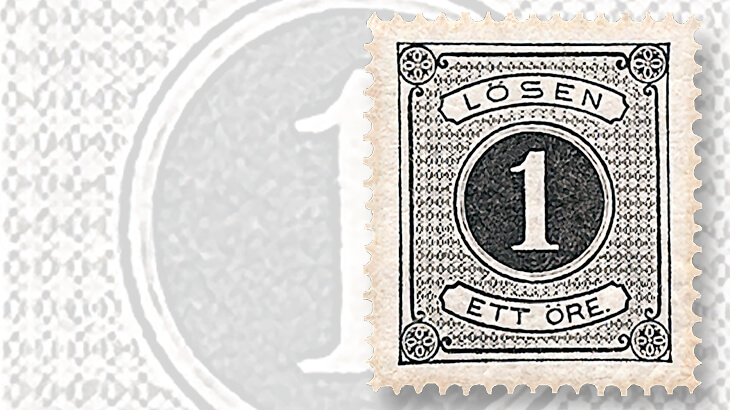 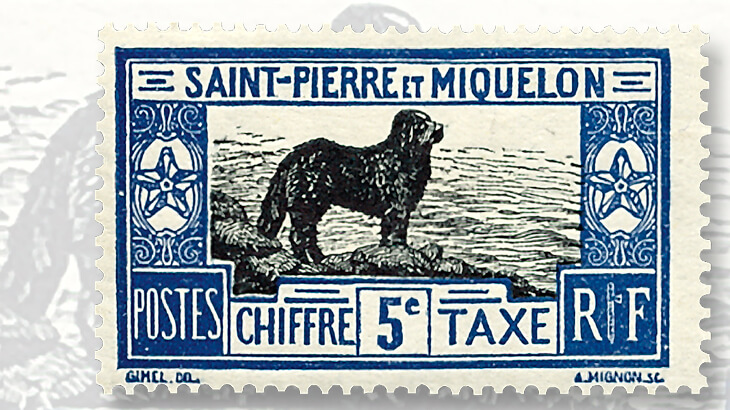 A Newfoundland dog appears on St. Pierre and Miquelon’s postage due stamps, beginning in 1932. 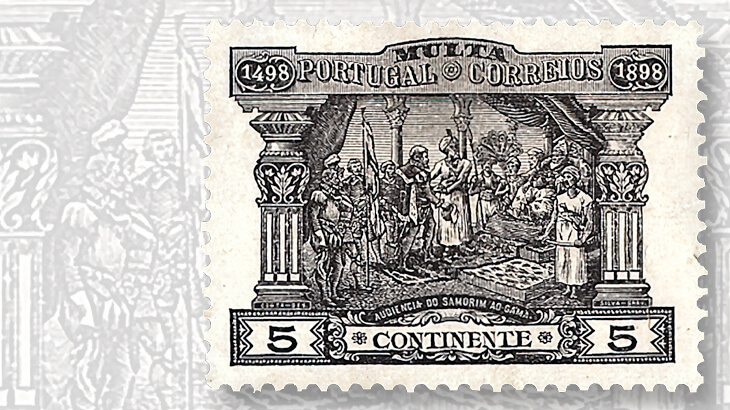 Portugal’s first postage due stamp, in 1898, portrayed a meeting 400 years earlier between Vasco de Gama and an Indian ruler. 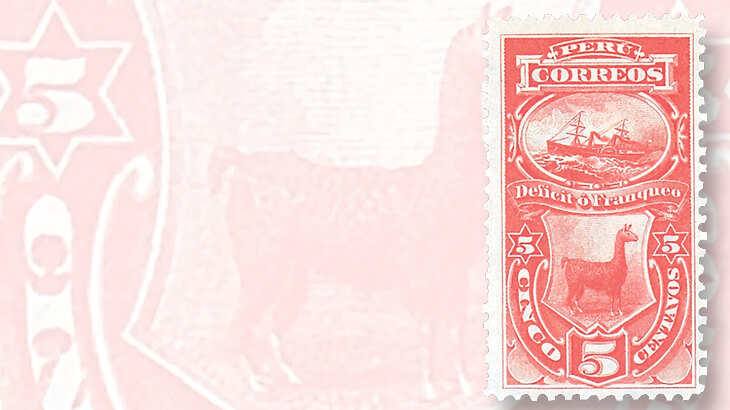 Unlike other countries that used simple numeral designs for their postage due stamps, in 1874 Peru began using a steamship and a llama on its postage dues. 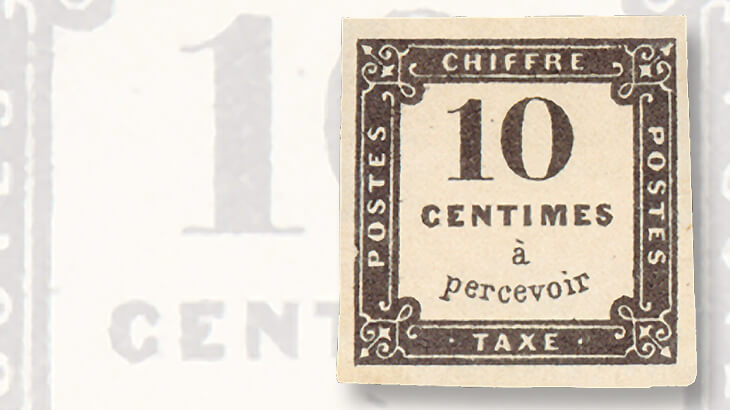 France issued its first postage due stamp in 1859. 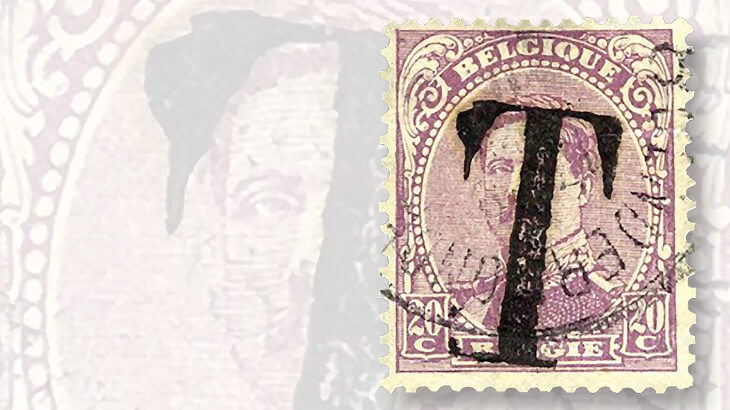 A regular stamp showing Belgium’s King Albert I was handstamped with a “T” (taxe) to indicate its use for postage due.
Previous
Next

Over the history of the mails, letters and parcels have entered the mailstream with insufficient postage affixed.

Generally, the shortfall will be caught by a postal clerk or mail carrier and the item will be returned to the sender for payment of the missing amount.

If the mailpiece does not have a return address, paying the postage amount that is due to the postal service will become the duty of the mail’s recipient.

Less often, underpaid mail will squeeze through the system, causing the postal service to lose money.

There have been many methods used by postal services to indicate there is additional postage due on a mailpiece. For example, the letter “T” can be found on mail, standing for the French word “Taxe,” and indicating that money is due to the post office because of insufficient prepayment.

The “T” marking can be handwritten or handstamped on a cover (envelope) or parcel, or even handstamped on a postage stamp, as shown in the first illustration of a Belgian stamp (Scott J16F.)

The original 20-centime stamp depicting King Albert I, part of a series that began in 1915, later was handstamped with a “T” to make it into a postage due stamp.

Underpaid covers and handstamped markings are certainly collectible, but official postage due stamps are probably the more likely to be found in stamp albums.

The first postage due stamp was issued by France (Scott J1) in 1859, and an example is shown in the second illustration.

The stamp is quite basic in design, with “10 CENTIMES” for the amount due in the center surrounded by a frame containing, clockwise, the words “Postes” (posts), “Chiffre” (numeral), “Postes” again, and “Taxe” (tax due). Below the numeral 10 are the words “a percevoir,” meaning “to be collected.”

When other nations’ postal administrations saw the benefits of France’s postage due stamps, they began issuing their own.

The design of Sweden’s first postage due stamps, issued in 1874, resembles the first French postage dues, being a simple design centered on a numeral. In a curved bar above the denomination on each stamp is the word “losen,” meaning “stamp fee.”

The United States’ first postage due stamps arrived in 1879, with designs based again on a central numeral, but one surrounded by a rather ornate frame. There initially were seven denominations, ranging from 1¢ to 50¢ (Scott J1-J7).

A similar embellished numeral design was used for Australia’s first postage due stamps, issued in 1902. For comparison, a U.S. and an Australian postage due issue are illustrated side-by-side nearby.

In fact, a great many of the world’s postage due stamps have simple designs consisting of a denomination that denotes the amount due and the country’s name.

However, some nations jazzed up their postage dues to make them more interesting and attractive. Peru is a case in point: Its first postage due stamps were large, colorful, and bore images of a steamship and a llama. There were four denominations in the first postage dues of Peru, from 1874, Scott J2-J5 (J1 was issued in 1879).

Portugal’s first six postage dues, issued in 1898, share a complex, detailed image that depicts the Zamorin of Calicut receiving Vasco da Gama. “Zamorin” was the royal title of the ruler of a kingdom in southern India, visited by the Portuguese navigator da Gama in 1498.

In 1892, St. Pierre and Miquelon began using postage due issues of the French Colonies overprinted “ST. PIERRE M.-on.” In 1932, those islands off the coast of Newfoundland ceased using French Colonies’ postage dues and began issuing ones with their own country name and a design of a charming Newfoundland dog standing and gazing at the ocean.

Finding postage dues on covers is not always easy, but hunting for them is fun.

Modern-day postage due stamps are disappearing; in 1985, the U.S. Postal Service discontinued printing postage due stamps, and other nations have done so as well. However, there are more than a century’s worth of worldwide postage due issues to be had.

Think about beginning a dues collection the next time you visit a stamp show, or ask your favorite stamp dealer to help you get started or find the ones missing from your current collection.