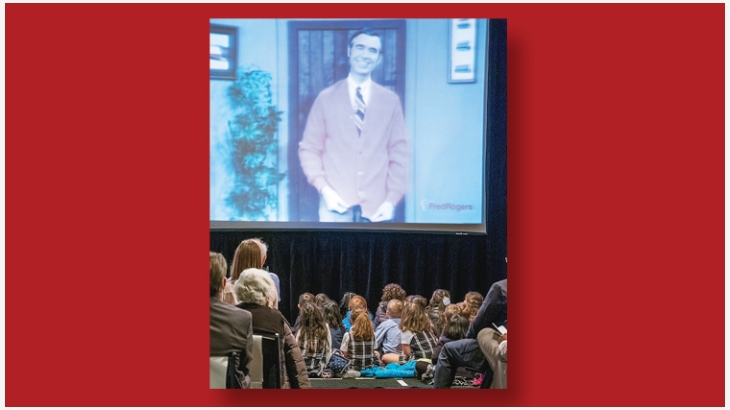 The United States Mister Rogers commemorative forever stamp debuted March 23 in front of a full house, fittingly in the Fred Rogers studio at WQED where the television show Mister Rogers’ Neighborhood was filmed.

The crowd consisted of stamp collectors; a significant number of local residents; stars, cast and crew of Mister Rogers’ Neighborhood; and even a former postmaster general. The ceremony was one of the best I have attended in years. Those that weren’t able to be there can view a video of the event on the U.S. Postal Service’s Facebook page.

Another set of attendees included 48 first-grade students from the Sacred Heart Elementary school and the Falk Laboratory School. It was a story about their participation in the event that struck me the most.

The Postal Service media representative that covers Pittsburgh, Tad Kelley, told me about how he visited both of the classrooms a couple of days before the ceremony to give the children a brief background on how stamp subjects are selected. He showed the students a collage of the 2018 stamps and individual stamps he thought they might be interested in.

“I asked them if they knew what Bioluminescence meant,” Kelley said. “On both days a student raised their hand and said ‘It means they make their own light.’ ”

“At the Falk School, I simply showed an image of Sally Ride and immediately hands rose, ‘That’s Sally Ride,’ one student said.

“I asked if he could also tell me why Ms. Ride would be on a stamp. ‘She went into space,’ he replied. I shared also she was the first woman to do so, too,” said Kelley.

“At Falk school, I ask what Dr. Salk was known for. ‘He cured polio,’ a student exclaimed,” said Kelley.

Kelley also showed photos of him at some previous stamp unveilings to help the students understand what they were about to witness with the Mister Rogers stamp event.

“Both groups of children were incredibly engaging and intelligent,” Kelley said. “I could tell their teachers had been preparing them for this wonderful experience at the dedication, too.”

What impressed me most (outside of the impressive knowledge of the first-graders Kelley met) was that in true form to what Fred Rogers would have done, Kelley really did take stamps to the neighborhood. If this sort of activity could be cloned for future events, I think it would go a long way in promoting stamps to classrooms that attend ceremonies.