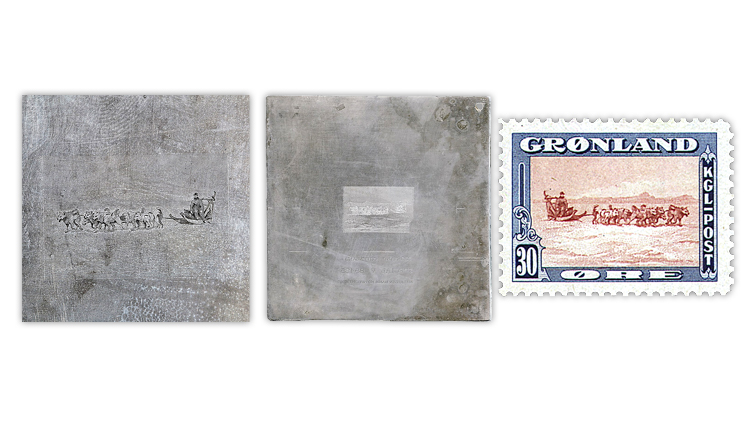 David Lawrence Rare Coins is selling original engraved stamp printing dies from the archives of the American Bank Note Co. Shown is the die for Greenland’s 1945 Dog Team 30-ore stamp, a close-up of the dog team vignette, and the issued stamp (Scott 15).

Some interesting items have recently come out of the woodwork, as one might say, and onto the marketplace.

For example, I recently learned about a coin dealer who was selling steel dies that were used for stamp printing. The dies are from the archives of the American Bank Note Co., and the dealer is David Lawrence Rare Coins. Because stamp collectors might not be familiar with that coin firm, I wanted to bring these steel dies to the attention of Linn’s readers.

After visiting the introductory webpage for this collection of American Bank Note Co. stamp plates and dies, I spend an hour or so going through the listings of the 948 engraved dies that the firm is selling by auction (closing in mid-June) or direct purchase.

The coin dealer has reported that the dies were acquired in 2018 from Archival Collectibles, who originally purchased the American Bank Note Co. archives.

Some of the items that jumped out at me relate to Denise McCarty’s article in the June 1 issue of Linn’s about Greenland’s 1945 stamp set (Scott 10-18) printed by American Bank Note Co. Greenland recently marked the 75th anniversary of that issue with a new souvenir sheet of three.

As of June 3, the David Lawrence Rare Coins website listed eight stamp dies from Greenland’s 1945 stamp issue: six that were vignettes only and two showing the stamp frames. Pictured is a close-up of the vignette of the dog team, an image of the full engraved die and the 30¢ Dog Team stamp as issued (Scott 15).

Collectors of Latin America stamps should also take note: Printing dies are offered from Costa Rica, Guatemala, Uruguay and more. Dies representing stamps from other countries of the world are also being sold.

For the United States, there are a number of state revenue stamp dies and even dies for cinderellas (stamplike labels) that American Bank Note Co. printed for Eaton’s Paper Co. to include in boxes of stationery given out at the 1939 New York World’s Fair. The 10 designs show scenes of New York City, including the Brooklyn Bridge, Central Park, a train and more.

When stamp shows resume, I will be looking through the exhibits to see if any of these dies were purchased by stamp collectors, and if so, how they were incorporated into their exhibits.