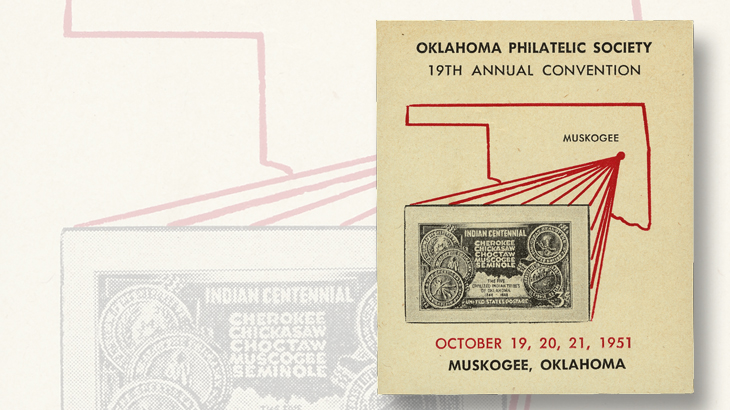 By 1951, when this Oklahoma Philatelic Society souvenir was produced, laws had changed to allow United States stamps to be illustrated in black-and-white at 75 percent or 150 percent of normal size. 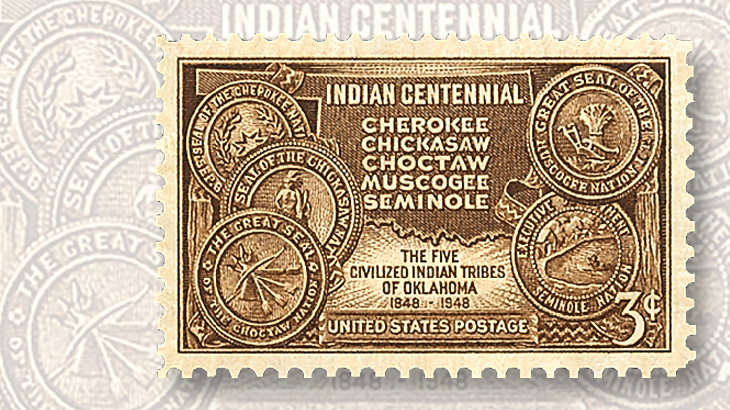 The United States 3¢ Indian Centennial stamp of 1948.
Previous
Next

I was surprised to see the 1948 3¢ Indian Centennial stamp (Scott 972) pictured on the 1951 Oklahoma Philatelic Society convention label shown nearby.

Why? Because there was a long-term ban on reproducing United States stamps in such a way as to facilitate the use of such illustrations for genuine postage.

However, the 1872 law was not enforced with vigor until 1882. This made the printing of stamp albums and stamp catalogs extremely difficult, and led to a change in the law in 1923 to permit the frames of U.S. stamps to be shown at four times the normal size.

Fifteen years later, Congress passed the Hayden-Duffy Act on Jan. 17, 1938. This act provided that full illustrations could be used if they were of a size less than 75 percent of the actual stamp, or more than 150 percent of the normal size.

Also, this law required that the illustrations could be in black-and-white only. Color was strictly forbidden.

This was the law in effect when the Oklahoma sheetlet was produced. Note that the stamp — normally a golden-brown — is in black-and-white, and the image is 75 percent of normal.

Some 35 years later, the law was again changed to allow for color reproduction of stamps.

I think we can all agree that this was a positive change, and that our periodicals, stamp catalogs, advertising, auction catalogs, and indeed the U.S. Postal Service’s own sales catalogs are better for it.