The untagged variety of the United States 22¢ Bison stamped envelope on unwatermarked paper with three precancel lines (Scott U608a) was used for a mass mailing by the publisher of the Reader’s Digest. Used examples with the Reader’s Digest corner card and inscription are valued at $35 and might be found lurking unrecognized in dealers’ dollar cover boxes. 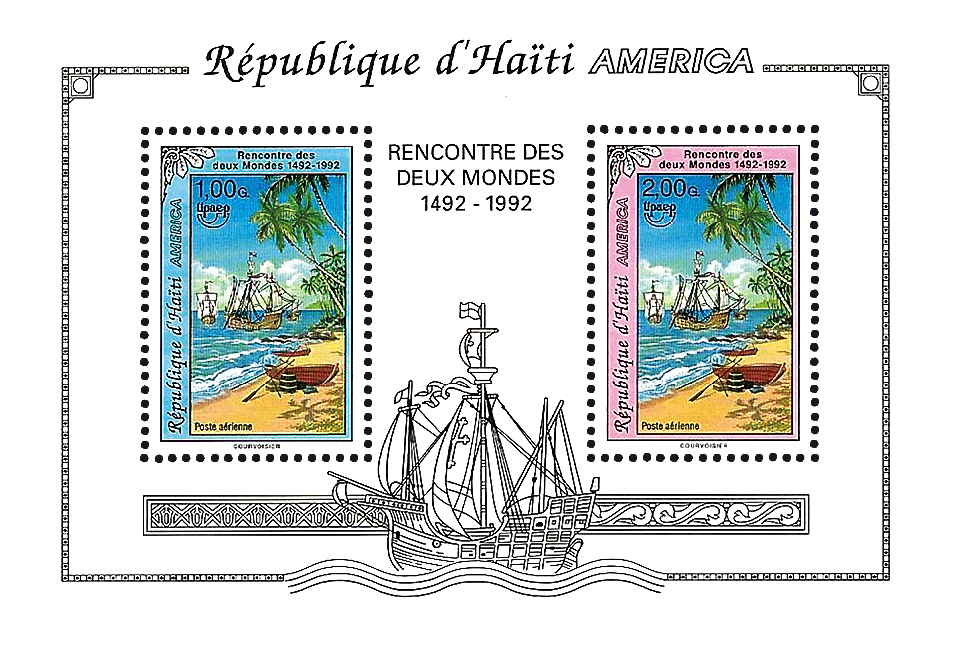 Haiti’s 500th Anniversary of Columbus’ Discovery of the Americas souvenir sheet of two stamps (Scott 857a) is difficult to find and worth $100 or perhaps a bit more in mint never-hinged condition.

Haiti — Haiti is the second oldest republic in the Western Hemisphere after the United States. It occupies roughly the western third of the island of Hispaniola in the Caribbean Sea.

Christopher Columbus discovered Hispaniola on his first voyage to the Americas in 1492. He established a post at La Navidad on the north coast in what today is Haiti. La Navidad, the first European settlement in the New World, was destroyed by the native population before Columbus’ return.

In 1993, Haiti issued a set of five stamps and a souvenir sheet of two (Scott 854-858 and 857a) commemorating the 500th anniversary of Columbus’ discovery of the Americas. The five-stamp set is easy to find and relatively inexpensive. The 2015 Scott Standard Postage Stamp Catalogue values the set at $11.45 in mint never-hinged condition.

However, the souvenir sheet of two is very difficult to find and is not valued in any condition in the Scott Standard catalog.

In addition to collectors of Haiti, the souvenir sheet is avidly sought by Columbus topical collectors. If you find one offered in mint never- hinged condition, it would be well worth $100 or perhaps a bit more.

In February 1985, the U.S. Postal Service issued a 22¢ Bison postal stationery envelope (Scott U608). An untagged version on unwatermarked paper with three precancel lines was issued Nov. 1, 1986 (U608a). The 2015 Scott Specialized Catalogue of United States Stamps and Covers values a mint entire of this variety at just 60¢ and a used example at 25¢. However, this variety is relatively elusive. The United Postal Stationery Society’s Catalog of the 20th and 21st Century Stamped Envelopes and Wrappers of the United States values the entire at $3 in both mint condition and used condition.

Much scarcer is a variety with a Reader’s Digest printed inscription and corner card, which was used by the magazine publisher for mass mailings. The ZIP+4 presort only comes on the Reader’s Digest variety.The UPSS catalog values the entire at $35 in used condition and does not value it in mint condition. It is exceedingly scarce and is a good example of what can sometimes be found in a dealer’s dollar cover box if you know what to look for. — H.G. & R.M.