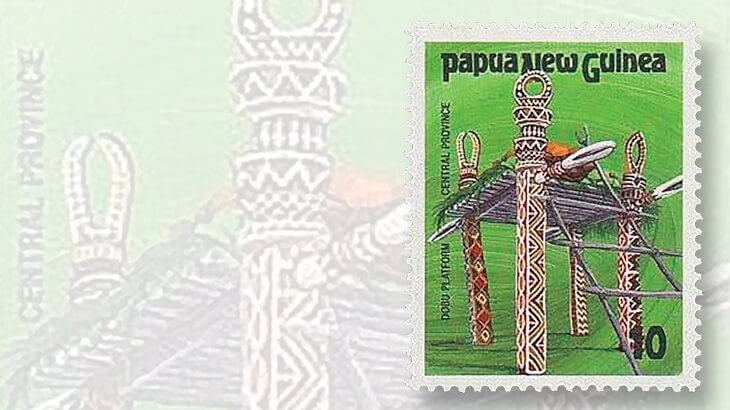 The unissued Papua New Guinea Ceremonial Structures set of 1985 is in demand and selling in the $150-to-$200 price range.

Papua New Guinea comprises the western half of the large island of New Guinea and nearby islands, which lie in the Pacific Ocean north of Australia.

Formerly organized as the colonies of German New Guinea and British New Guinea, it was administered by Australia from 1905 to 1975, when it gained independence. It was invaded by the Japanese in World War II and was the scene of some of the fiercest fighting in the Pacific Theater.

In 1985, Papua New Guinea postal authorities prepared a four-stamp Ceremonial Structures issue. The designs featured a dubu platform, a Tamuniai house, a yam tower, and a Huli grave, and were denominated 10 toea, 20t, 30t, and 60t.

Some sets of the unissued stamps, which are not listed, noted, or valued in the Scott catalog, escaped destruction and found their way into the philatelic market. Sets are currently selling in the $150-to-$200 price range. If you find the set for less than that, it would be a good buy.