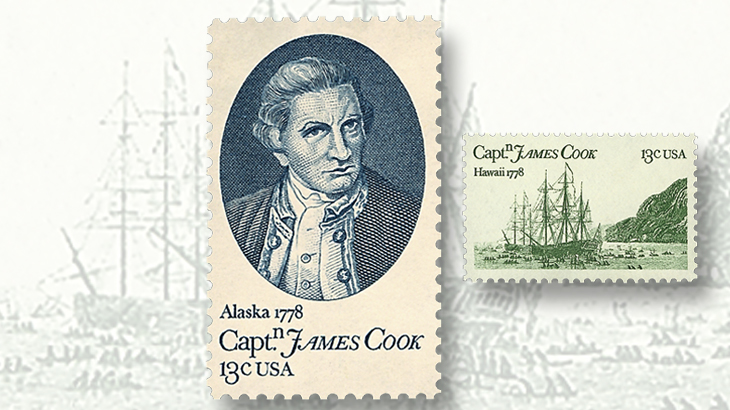 Mint panes of 50 of the 1978 13¢ Capt. James Cook and 13¢ HMS Resolution and HMS Discovery stamps (Scott 1732-1733), popular with topical collectors, can still be found in discount postage lots at face value or less.

This May brought news of the discovery of the wreckage of HMS Endeavor, Capt. James Cook’s ship in which he explored the Pacific Ocean on his first voyage (1768-71) and visited Hawaii, Australia and New Zealand.

Cook, possibly the most influential and famous explorer in human history, has been commemorated on many stamps worldwide and is a popular subject of topical collecting.

The 2016 Scott Specialized Catalogue of United States Stamps and Covers values the stamps in mint never-hinged condition at 25¢ each and 50¢ for se-tenant pairs, the catalog minimum. This issue was produced at the height of the speculation period when dealers and collectors were socking away huge stocks of mint U.S. stamps.

You can still find mint panes of 50 of this issue at or below face value in dealers’ discount postage boxes. But this is an issue with strong topical appeal. If you find them at a good discount, it wouldn’t hurt to sock away a mint pane or two of 50 against the day when enough of them have been used up for postage to make it worthwhile.