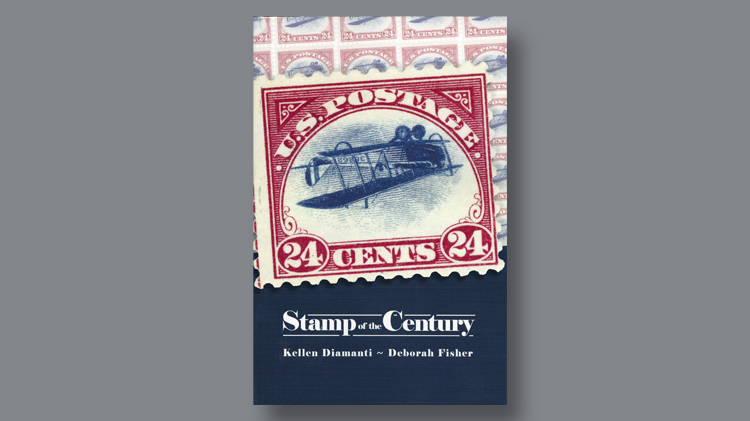 A book on the Inverted Jenny, Stamp of the Century by Kellen Diamanti and Deborah Fisher, was recently published by the American Philatelic Society.

There is no shortage of reference material for the United States’ most famous, or infamous, stamp error: the 24¢ Inverted Jenny airmail stamp. Still, 100 years after the stamp was issued and the error was discovered, it is interesting to see a new literary work that focuses on it: Stamp of the Century by Kellen Diamanti and Deborah Fisher.

What sets this new book apart from others is how it helps bridge the gap between philately and a much larger audience through the use of additional nonphilatelic items.

On the first day of a college course on investigative journalism, we were told to follow the money. And that plays a role in what the Stamp of the Century book does.

According to the authors, the book “recounts the stories of passionate collectors and dealers, society women, captains of industry, and even thieves and murderers who bought, sold, stole, fenced, and mutilated the Inverted Jenny.”

The early part of the book explores the early pioneers of airmail and looks at the Jenny airmail stamp, too.

The book depicts some images of the Jenny stamp proof, along with an essay from the Bureau of Engraving and Printing’s archives.

On the nonphilatelic side, many chapters dive into the lives of those who were caretakers of Inverted Jenny stamps. It is amazing to read about why people wanted to be a part of this stamp error’s story by owning one.

Interviews with descendents of owners of the Inverted Jenny error helped unearth never-before heard stories that added to the lore of the stamp.

Stamp of the Century is 403 pages long with color illustrations throughout. It was published by the American Philatelic Society and is available on its website. Not including shipping costs, the book is $19.99 for APS members and $24.99 for nonmembers.

The first production run sold quickly, and the APS is taking orders with an expected ship date at the end of May.