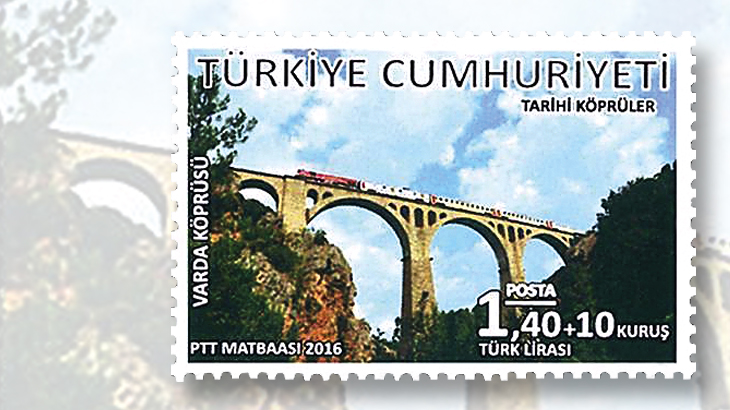 The railway viaduct bridge depicted on this recent semipostal stamp from Turkey was featured in the opening sequence of the 2012 James Bond film Skyfall. 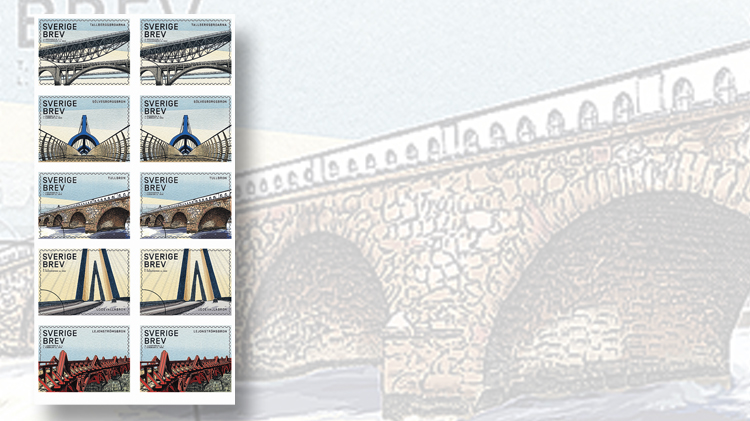 A new booklet of stamps from Sweden highlights bridges spanning the centuries, from a wooden bridge built in the 18th century to a pedestrian bridge completed in 2012. 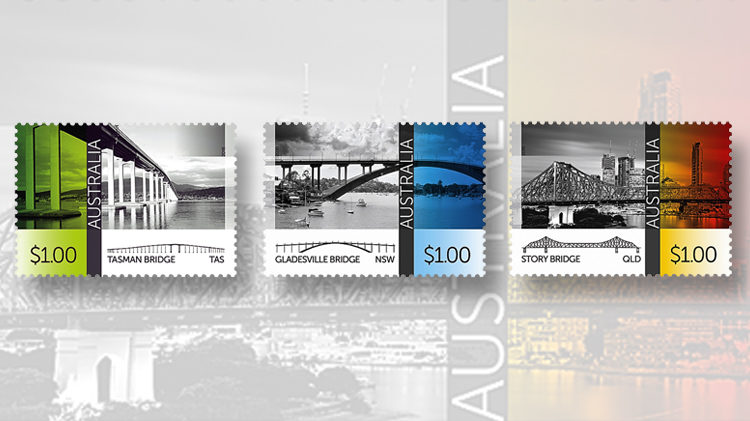 Bridges of Australia, Sweden, and Turkey are pictured on stamps issued in March.

Michael Zsolt, the philatelic manager for Australia Post, said: “While bridges play an important utilitarian role, they are also striking feats of engineering. The stamp issue pays tribute to the design and construction of this vital form of transportation infrastructure.”

One stamp shows the Tasman Bridge. Completed in 1964, this five-lane bridge crosses the Derwent River. The bridge was reconstructed in 1975 after it was hit by a steel bulk-ore carrier, and it reopened in October 1977.

The website of the Australian Bureau of Statistics, said of the disaster and the reconstruction: “On 5 January 1975, the Lake Illawarra, with a cargo of 10,000 tonnes of zinc concentrate bound for the Elecrolytic Zinc Company, collided with the Tasman Bridge and sank.

“Two piers of the bridge were demolished, and three spans of deck supported by them collapsed. Twelve people died in the accident.”

“In March 1975, a Joint Tasman Bridge Restoration Commission was appointed to restore the Tasman Bridge. The reconstruction of the bridge included the modification of the whole bridge to accommodate an extra traffic lane to allow for a peak period tidal flow system of three lanes for the major flow and two for the minor.”

Another stamp pictures the Gladesville Bridge over the Parramatta River, part of a complex of three bridges in Sydney.

The website of the New South Wales Roads and Maritime Services agency, said of this bridge’s place in history: “When opened on 2 October 1964 it was, at 1000 feet (305 metres) the longest span concrete arch bridge in the world. It remained so until superseded in 1980 by the 416 metre span Krk Bridge in Croatia.”

Illustrated on the third stamp is Story Bridge. This Brisbane landmark was designed by John Bradfield, who also designed Australia’s most famous bridge, the Sydney Harbor Bridge.

Sean Pethick designed the stamps. EgoTrade printed them by offset in sheets of 50 with moisture-activated gum and as self-adhesives in booklets of 20.

Sweden presents a variety of bridges on five stamps issued March 17 in a booklet of 10 (two of each design).

The new-issue announcement from Sweden Post reports that the bridges were selected to represent different eras, building techniques, and architecture.

Sweden’s oldest wooden bridge, Lejonstromsbron, is pictured on the bottom stamp in the booklet. This bridge crossing the Skellefte River was completed in 1737. In 1809, it was the scene of the last armed battle in Sweden.

Also from the 18th century is Tullbron, the stone arch bridge depicted on the middle stamp. Built between 1756 and 1761 over the Atran River in Falkenberg, it is still in use.

Until 1914, it was a toll bridge (the name Tullbron translates to “toll bridge”), but postmen, soldiers, and prisoners could cross for free, according to the tourism website, visitfalkenberg.se.

The Tullbron stamp also was produced in a pane of six, which Sweden Post calls a souvenir sheet.

The top stamp in the booklet represents three railway bridges built over two centuries in Vasterbotten. Known as Tallbergsbroarna, or the Tallberg bridges, the earliest was the iron bridge of 1888, followed by the cement bridge of 1919, and finally the steel and cement bridge of 1994.

Uddevallabron, or Uddevalla Bridge, was opened in 2000 to carry traffic on European Route E6, over Sunninge Sound.

This cable-stayed bridge is more than 5,500 feet in length with two pylons that are more than 475 feet tall. It is pictured on the stamp that is second from the bottom on the booklet pane.

The newest bridge in the Swedish booklet is shown on the second stamp from the top. Solvesborgsbron, or Solvesborg Bridge, was completed in 2012.

In an article on the architecture website, James Bartolaccit described this bridge: “In Sweden, a series of undulating arches, brightly lit by fuchsia-tinted LED lights, dance across the Solvesborg Bay. From a distance, the structure could be mistaken for the Loch Ness Monster’s mysterious glowing cousin, but these massive illuminated vaults actually support Europe’s longest pedestrian bridge.

“Spanning 2,480 feet —that’s nearly half a mile! —the Solvesborg Bridge was designed by Swedish design firm Ljusarkitektur in collaboration with lighting company Lumenpulse to connect the small town of Solvesborg with a new housing district across the bay.”

The stamps are nondenominated. The word “brev” indicates that each pays the basic domestic rate, currently 7 krone.

They were printed by a combination of the offset and intaglio processes, and Lars Sjooblom and Piotr Naszarkowski engraved the designs.

A bridge featured in a James Bond film is pictured on one of Turkey’s two Historic Bridges semipostal stamps issued March 9.

In the opening of the 2012 film Skyfall, James Bond fell from the Varda Viaduct, a railway bridge near Adana, Turkey.

A report on the new stamps in the Hurriyet Daily News said, “The bridge is best remembered for a scene where actor Daniel Craig is seen falling off the bridge from a train. With the bridge’s popularity after the release of the film, groups of visitors have been boarding trains to visit the bridge and surrounding area.”

The other stamp pictures the Irgandi Bridge, a 15th-century stone arch bridge in Bursa that includes more than 30 shops and a mosque.

The stamps are denominated 1.40 liras with a surtax of 10 kurush.