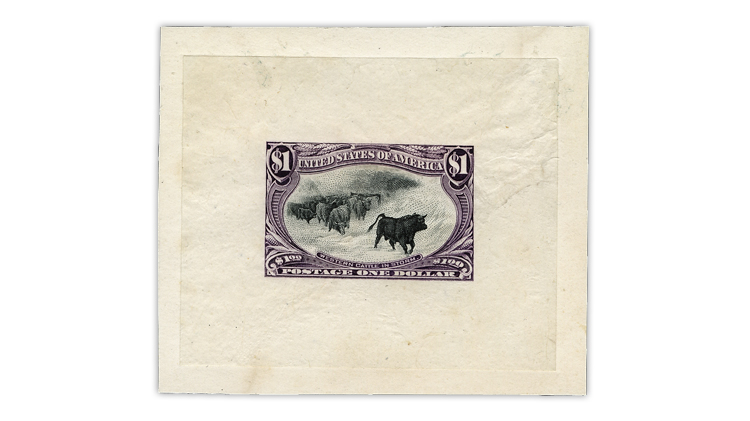 Figure 1. This essay for the $1 Trans-Mississippi stamp of 1898 is a bicolor rendering of the much-loved design. It was intended that the entire nine-stamp issue be produced as bicolors with the central designs in black and the frames in a range of colors 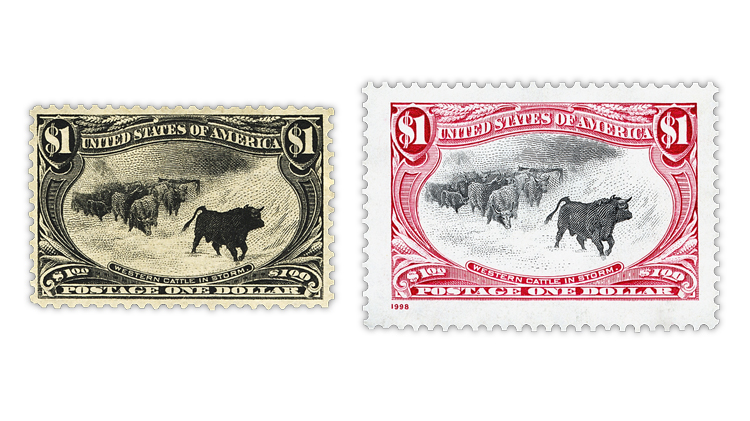 Figure 2. The United States 1898 $1 Trans-Mississippi stamp was printed in a single color, black. For the 100th anniversary of the issue, in 1998, the United States Postal Service printed the entire issue as bicolor stamps. The $1 denomination is in carmi
Previous
Next

Art is an essential component of stamp design. If we listen to stamp collectors, true excellence is not routine, and it is rare for any one stamp to get near 100-percent approbation. It may be stretching a point to say this, but probably the last stamp to attain that lofty goal was the $1 Trans-Mississippi of 1898.

Figure 1 shows an essay (a trial design) of that $1 stamp. The essay is a bicolor with the vignette (the center design) in black and the frame in dull violet blue.

Bicolor essays exist for all nine denominations of the Trans-Mississippi issue. All had the vignette in black, with a range of colorful frames.

It was the intention of the Post Office Department to issue the stamps in that form. But the Spanish-American War broke out in April 1898, and bicolor stamp production was a casualty.

According to Lester Brookman, writing in The United States Postage Stamps of the 19th Century, the war "necessitated the printing of enormous quantities of revenue stamps and the facilities of the Bureau [of Engraving and Printing] were taxed to the utmost.

"The time and manpower needed for the printing of stamps in two colors could not be spared and it was necessary for the Bureau to abandon the proposed bi-color stamps in favor of stamps of single colors."

Nevertheless, the original $1 stamp was and remains a popular selection as being among the most beautiful U.S. issues of all time. Part of its attraction is the intricate engraving that contributes a great deal to its beauty.

Also, part of its attraction is the unusual and interesting design showing a herd of cattle, led by a majestic bull, seeking safety from a snowstorm.

When first announced, the vignette was presented as being of American origin and titled Western Cattle in Storm. That turned out not to be the case; instead, the design of the stamp was based on the painting The Vanguard by Scottish artist J.A. MacWhirter.

Although the original painting had been sold to an Englishman, a print in the possession of an American cattle company was used as the basis for the stamp design. The Post Office Department changed the original name given the painting by the artist. Only later was it discovered that the subject was a group of Scottish cattle in the West Highlands of Scotland.

Today, the $1 Trans-Mississippi stamp is much sought after and considered to be one of the essential building blocks of an advanced U.S. collection.