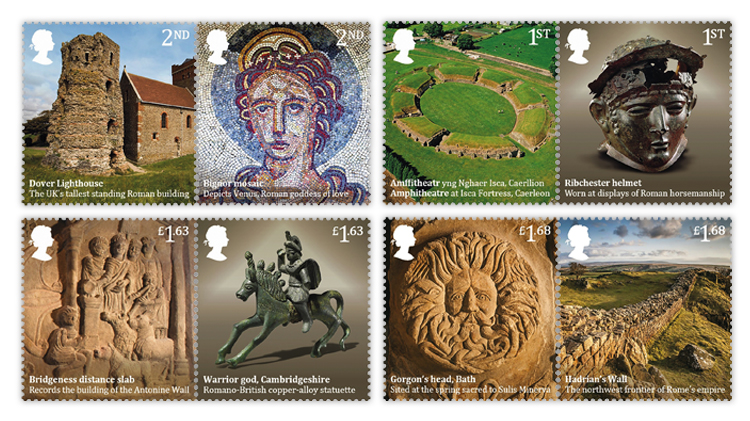 Royal Mail worked with the British Museum in creating its Roman Britain stamp issue. The eight stamps are being issued June 18 in four se-tenant pairs. The designs show the Dover Lighthouse, a Bignor mosaic, the Caerleon amphitheater, the Ribchester helme

Great Britain’s Royal Mail is issuing eight stamps June 18 featuring sites and artifacts related to Roman Britain, referring to the 400-year period between 43 and 410 A.D. when much of mainland Britain was part of the Roman Empire.

In the press release announcing the stamps, Royal Mail said: “This period has a profound effect on British society, laws, language, art, architecture, culture and beliefs. Rome’s lasting legacy is visible in standing remains such as forts and villas and archaeological finds displayed in museums across the UK.”

The stamp subjects were selected in collaboration with the British Museum.

Richard Hobbs, the Weston curator of Roman Britain at the museum, said: “It was a great honour to work with Royal Mail on this project. The eight sites and objects chosen give a taste of life in Roman Britain, which I hope will encourage people to explore this fascinating period in Britain’s history further.”

One second-class stamp shows the Dover Lighthouse, and the other depicts a mosaic from the remains of the Bignor Roman villa.

Royal Mail said: “Possibly modelled on the Pharos at Alexandria in Egypt, it probably stood to a height of around 24m (80ft). When it was in use, a beacon of fire would have been lit at night to guide ships using the [English] Channel.”

According to the website of English Heritage, which cares for more than 400 historic buildings, monuments and sites, the Romans built the lighthouse after they invaded Britain in AD 43. St. Mary in Castro, the church that now stands beside the Roman lighthouse, was built around 1000.

The remains of the Bignor Roman villa in Sussex were discovered in 1811 when a farmer, George Tupper, was plowing his field. The mosaic featured on the stamp is believed to show Venus, the Roman goddess of love. According to Royal Mail, this mosaic probably dates from the early 4th century.

The two first-class stamps show items related to ancient Roman sports: an amphitheater in Wales and a helmet worn during displays of horsemanship.

The amphitheater at Isca Fortress, Caerleon, was built around 80 A.D. to entertain the legionaries at the fortress and included seating for 6,000 spectators, according to the website of the Welsh government’s historic environment service.

The helmet was discovered in 1796 by the 13-year-old son of a clog maker at Ribchester, Lancashire, and is known as the Ribchester helmet.

It is one of the British Museum’s most iconic pieces, and also one of its earliest. According to Hobbs, it has been part of the national collection since its discovery.

The museum describes it as a spectacular piece “decorated with a scene of a skirmish between infantry and cavalry,” adding that “When used, the head-piece and face mask of embossed bronze would be held together by a leather strap. A crest-box and a pair of trailing streamers or ‘manes’ would have been attached to the head-piece.”

One of the £1.63 stamps pictures a slab that records the building of the Antonine Wall in Scotland.

The approximately 30-mile wall “was mostly built out of turf, laid on top of a stone foundation” by members of three Roman legions, according to the Antonine Wall website.

The legions engraved sandstone tablets to commemorate the completion of their sections of the wall. The Bridgeness distance slab, part of which is shown on the stamp, is the most elaborate of the 19 known slabs.

The other £1.63 stamp shows a small statue of a man on horseback. According to the inscription on the stamp, it is a Romano-British copper-alloy statuette of a warrior god.

Royal Mail reports that this statuette, believed to be from the 3rd or 4th century, was discovered at Stow-cum-Quy in Cambridgeshire.

One £1.68 stamp shows a Roman artifact from a Roman temple at Bath, and the other depicts part of the stone fortifications of Hadrian’s Wall.

The former stamp is inscribed “Gorgon’s head, Bath” and “Sited at the spring sacred to Sulis Minerva.”

The head is from the pediment of a Roman temple at the spring. The Roman Baths at Bath website describes it as an “image of a fearsome head carved in Bath stone and it is thought to be the Gorgon’s Head which was a powerful symbol of the goddess Sulis Minerva.”

The website also says: “An alternative interpretation sees the central head as the image of a water god. It has similarities with other depictions of water gods known from Britain, such as the image of Oceanus on the great silver dish from Mildenhall.”

At more than 70 miles long, Hadrian’s Wall is the largest surviving Roman-era monument in Britain.

Royal Mail said: “Its construction followed Emperor Hadrian’s visit to the province in AD 122. A stone wall with milecastles, forts and a ditch, it formed a continuous barrier running from the River Tyne at Newcastle to Bowness on the Solway. Its likely purpose was to control tribal activity on both sides of the frontier.”

Hadrian’s Wall was also pictured on a 2005 stamp (Great Britain Scott 2280) that was part of a joint issue with Australia highlighting UNESCO World Heritage sites in the two countries, and a bronze bust of Emperor Hadrian is shown on a stamp (1503) in the 1993 set that depicts artifacts from Roman Britain.

The design agency Up designed the new set of eight stamps using photographs from different sources.

International Security Printers printed the stamps by lithography in sheets of 60 (sold in panes of 30 at most postal outlets). Each stamp is 35 millimeters by 37mm and perforated gauge 14.5 by 14.

Other products offered by Royal Mail in conjunction with the Roman Britain issue include postmarks, first-day covers, a presentation pack, and eight postcards reproducing the designs of the stamps.