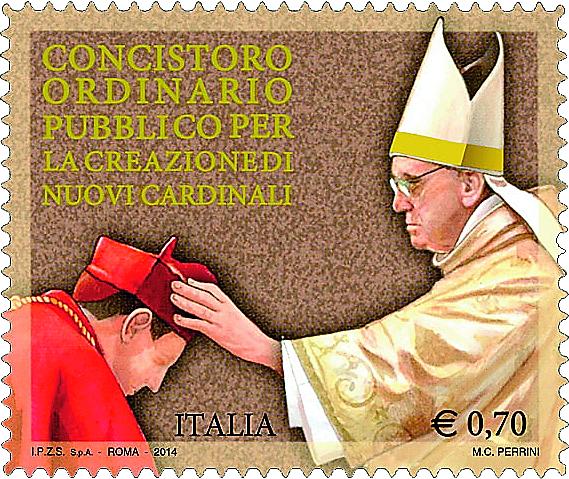 Figure 3. Italy began its 2014 stamp-issuing program with a commemorative stamp honoring the Feb. 22 consistory for the creation of cardinals in the Roman Catholic Church. 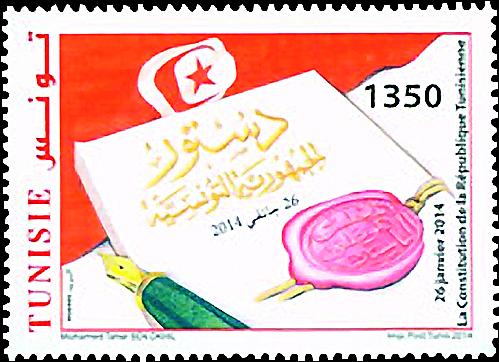 Figure 2. Tunisia issued a stamp Feb. 7 celebrating the adoption of a new constitution less than two weeks earlier, on Jan. 26. 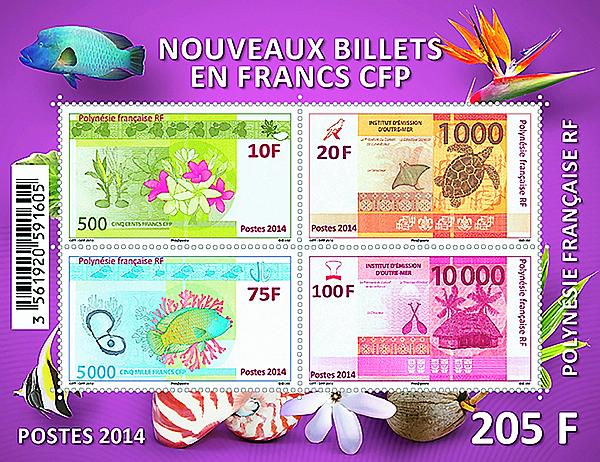 The banknotes for use in French Polynesia, New Caledonia, and Wallis and Futuna were put into circulation Jan. 20 by the L’Institut d’Emission d’Outre-Mer (IEOM), the central bank for the French overseas communities in the Pacific Region.

In addition to this souvenir sheet, French Polynesia issued each stamp separately in a sheet of 10.

The IEOM reports that the banknotes were designed in close consultation with the authorities of the three overseas communities, resulting in patterns and designs reflecting local fauna and flora, and the cultural and artistic heritage of each territory.

Each banknote represents a different basic subject with a related color scheme: flora (green), animals (orange), the marine environment (blue), and local culture and architecture (red). Other local items also are shown on each banknote.

Small images that the IEOM calls “see-through motifs” are among the many security devices included on the new banknotes.

These images are printed on both sides of the banknote: on the left on the front and on the right on the back. In a brochure announcing the banknotes, IEOM said, “The complete motif can be seen when the banknote is held against the light.”

The souvenir sheet from New Caledonia includes four se-tenant stamps: two denominated 75fr and two 110fr. The 50fr, 90fr, 115fr and 800fr stamps from Wallis and Futuna were printed in sheets of 10.

All of the stamps from Wallis and Futuna show only the fronts of the banknotes, while those from French Polynesia and New Caledonia show a mixture of fronts and backs.

Tunisia adopted a new constitution Jan. 26 and issued a stamp commemorating it Feb. 7.

Figure 2 shows this 1,350-millime stamp. The design depicts a fountain pen, a document authenticated by a red wax seal, and the star and crescent emblem from Tunisia’s national flag.

An inscription in French on the right side of the stamp includes the date Jan. 26, 2014, and words that translate to “the constitution of the Republic of Tunisia.”

Mohamed Tahar Ben Dkhil designed the stamp. It was printed by offset in a quantity of 500,000.

In announcing the new stamp, La Post Tunisienne said that it was issued “to commemorate this decisive moment in the history of Tunisia, adoption of the new constitution by the majority of members of the National Constituent Assembly.”

Also, the announcement called the constitution a “very important milestone in the construction of the second republic based on respect for human rights, freedoms and guarantees for achieving the objectives of the revolution of Dec. 17, 2010 to Jan. 14, 2011, such freedom and dignity and loyalty to the blood of our martyrs and sacrifices of our people over generations.”

Italy’s first stamp of the year honors the appointment of cardinals to the Roman Catholic Church in a ceremony known as consistory.

The design by Maria Carmela Perrini, shown in Figure 3, depicts Pope Francis bestowing the red hat, called a biretta, to a cardinal.

An online report by Liam Moloney for the Wall Street Journal said: “During the ceremony, Pope Francis gave each prelate, with the exemption of [98-year-old] Loris Capovilla who was too old to attend, a biretta, a cardinal ring and a papal bull assigning a church in Rome. The hat is red to symbolize their readiness to give up their life for their faith.”

The stamp is denominated €0.70 to pay the basic domestic rate.

Italy’s government stamp printing office printed 2,716,000 of these self-adhesive commemoratives in sheets of 28.