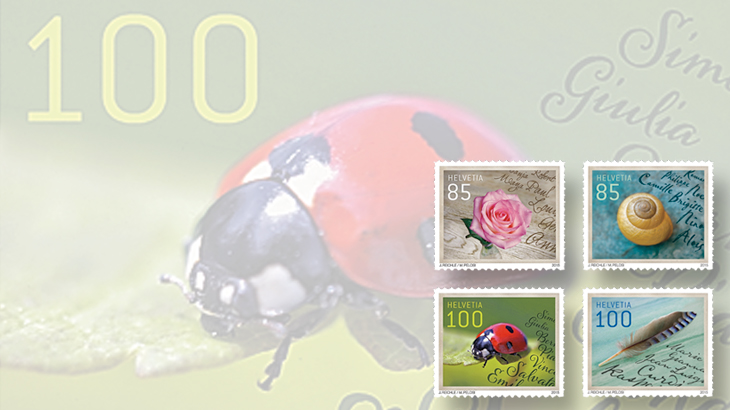 New definitives from Switzerland show a rose, a snail, a ladybug (also called ladybird), and a feather, along with names representing the country’s four language regions. The four stamps were issued Aug. 27. 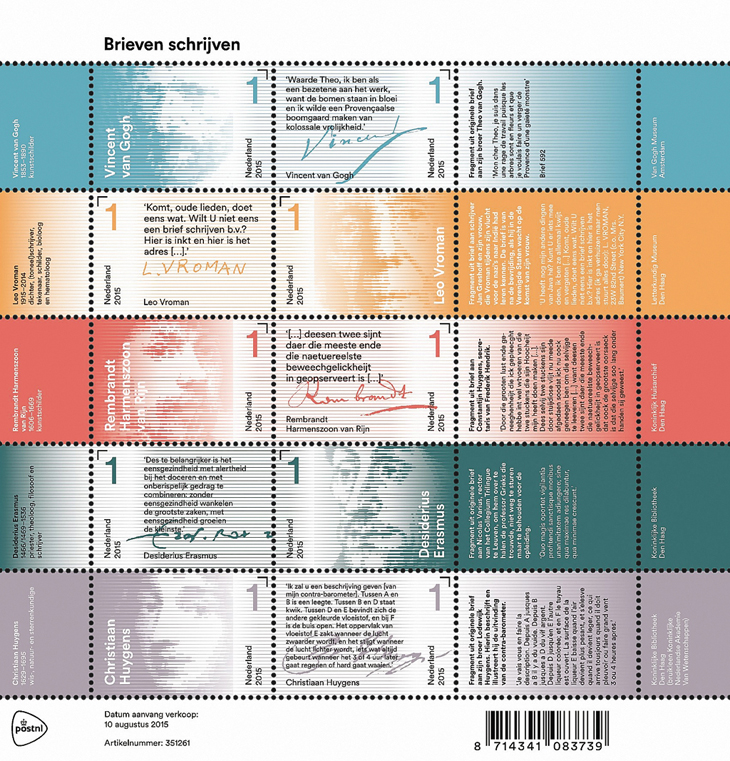 A pane of stamps from the Netherlands depicts famous people and excerpts from their letters, including a letter from Vincent Van Gogh to his brother.
Previous
Next

To encourage the writing of letters, the Netherlands issued a pane of 10 stamps Aug. 17 featuring famous people known for their personal letters.

Ludo Voorn, marketing director of PostNL, said of their designs: “This postage stamp sheet illustrates the rich history of letter writing in the Netherlands. The stamps show fragments from the letters by these five illustrious Dutchmen, along with the subjects they were working on at that moment.

“People still send letters to discuss important moments in their lives, and the new stamp sheet is meant as a source of inspiration.”

Labels se-tenant with the stamps provide more information about the letter writers and their letters.

The labels in the selvage on the left give the birth and death dates of the person and a brief description. In the case of Van Gogh (1853-90), the description is only one word, “kunstschilder,” which translates to painter.

According to the label on the right side of the pane, the quote is from a letter to his brother Theo van Gogh, which has been classified by the Van Gogh Museum in Amsterdam as letter No. 592. Translated into English, this letter begins, “My dear Theo, I’m in a fury of work as the trees are in blossom and I wanted to do a Provence orchard of tremendous gaiety. … ”

Joh. Enschede printed the stamps by offset. They are all nondenominated, paying the basic domestic letter rate.

Julia Reichle and Martina Pelosi won a competition to design these new definitives.

In an interview in Swiss Post’s publication Focus on Stamps, the pair explained what their designs represent: “The ladybird and the rose symbolize good wishes and congratulations, while the snail and the quill are symbols of affinity and sympathy. They are primal elements from nature that warm our hearts.”

Each design also includes handwritten examples of people’s names, which, according to Reichle and Pelosi, signify “the good old letter post.”

Joh. Enschede printed the self-adhesive definitive stamps in panes of 10.