The phrase “I am Singaporean” is spelled out on a sheet of stamps marking Singapore’s upcoming 50th anniversary of independence. 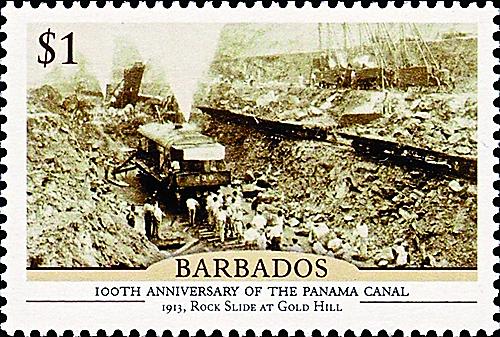 Approximately 60,000 men from Barbados helped build the Panama Canal. Scenes from the construction are pictured on five stamps from Barbados. The $1 stamp shows a photograph taken after a 1913 rock slide. Stamp photo courtesy of www.barbadosstamps.co.uk. 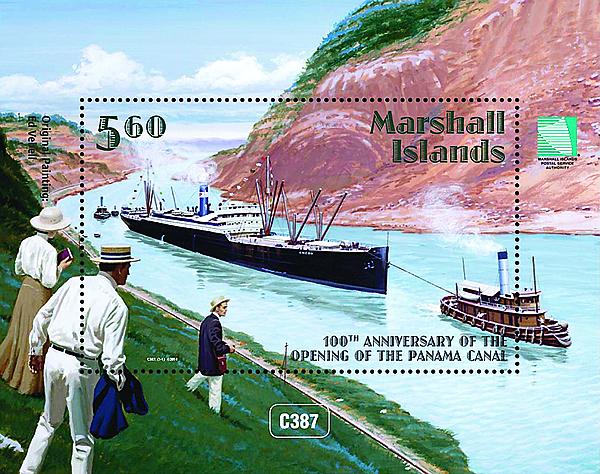 The Marshall Islands issued this souvenir sheet Aug. 15, on the exact 100th anniversary of the opening of the Panama Canal. 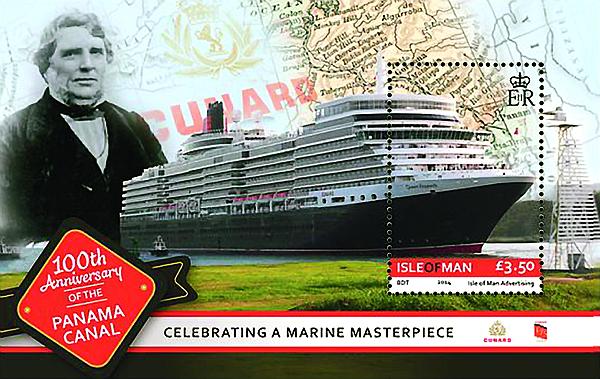 The Isle of Man’s souvenir sheet for the centennial of the Panama Canal pictures the cruise ship Queen Elizabeth II passing through the canal. Shown in the selvage is Manxman William Kennish who surveyed the Isthmus of Panama in 1854 to determine a route for a canal. 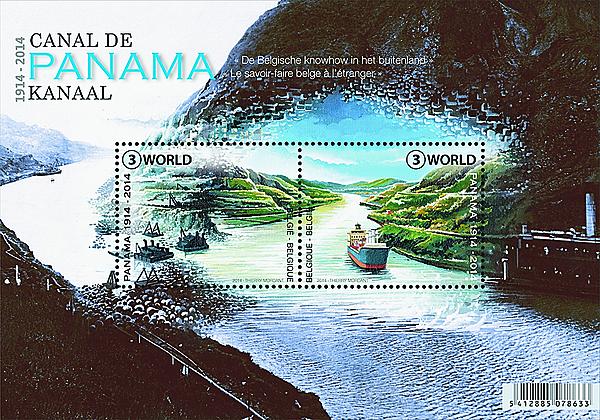 Linn’s has received several letters from readers asking why the United States Postal Service is not issuing a stamp to commemorate the 100th anniversary of the Panama Canal, the American-built canal that connects the Atlantic and Pacific oceans at the Isthmus of Panama.

While the Postal Service has no plans to issue such a stamp this year, several other postal administrations have marked the centennial with stamps and souvenir sheets.

Belgium issued a souvenir sheet July 7 with two se-tenant (side-by-side) stamps illustrating the construction of the canal and a ship passing through it.

Both stamps are nondenominated, with a “3” inside a circle and the word “world,” indicating that they pay the international rate for mail weighing between 100 grams and 350 grams, currently 2.10-euro.

Belgium’s post office, bpost, reports that in addition to honoring the canal’s anniversary, the sheet also salutes Belgium’s connections to the original construction and to the canal’s new reconstruction project.

Inscriptions in Flemish and French above the stamps note Belgium’s know-how and expertise abroad.

In the 3-2014 issue of Philanews, bpost’s publication for stamp collectors, the Belgian origins of American Army engineer George Washington Goethals are mentioned. The third and final chief engineer and supervisor of the canal’s construction, Goethals also was the first civil governor of the Panama Canal Zone.

His Jan. 22, 1928, obituary in The New York Times said, “The building of the Panama Canal, in which General Goethals succeeded after many distinguished American and European engineers had failed, took seven years and is regarded as one of the greatest engineering feats in history ... ”

His parents were Flemish immigrants from Stekne, Belgium.

Philanews also reported that Belgium is among the 39 nations participating in the expansion project.

The Jan De Nul Group, a dredging, civil and environmental contractor founded in 1900 in Aalst, Belgium, was awarded the contract to dredge the canal’s Atlantic entrance in September 2009, completing the work in April 2013. The company also is part of a consortium constructing new lock gates for the canal.

The Isle of Man Post Office honored the 100th anniversary on a souvenir sheet issued Aug. 8.

The sheet contains a single £3.50 stamp showing the bow of the Cunard’s Queen Elizabeth II passing through the canal.

In promoting the cruise, the Cunard website said: “Experience the Panama Canal in luxury on board Queen Elizabeth or Queen Victoria as part of a Cunard Voyage. The Panama Canal is a magnificent feat of engineering connecting the Pacific and Atlantic Oceans. Your ship will be guided through the canal, just inches from the canal’s sides in places on a journey that takes approximately 10 hours and provides a most memorable experience.”

The rest of the ship is shown in the selvage, as is a map of the canal and a portrait of William Kennish.

Born in Cornaa, the Isle of Man, in 1799, Kennish was an engineer, inventor and poet. He emigrated to the United States in 1849, and in 1855 was employed by the government to survey the Isthmus of Panama to find the best route for a canal. He published a report titled The Practicality and Importance of a Ship Canal to Connect the Atlantic and Pacific Oceans.

In the Western Hemisphere, Barbados issued five stamps Aug. 15 showing sepia-toned photographs taken during the construction of the canal.

In announcing the stamps, the Barbados Government Information Service said: “ … Approximately 60,000 Barbadians migrated to Panama and worked under hostile and demanding conditions in harsh terrain. Their work was impacted by constant landslides, diseases, sickness and the vagaries of the weather.

“However, they made a valuable contribution to the socio-economic development of Barbados, and the remittances they sent back home played a vital role in improving the livelihood of their families in Barbados.”

The photographs are arranged in chronological order, with the oldest photograph on the 10¢ low value of the set. This photograph shows workers aboard SS Ancon arriving at Cristobal in 1909.

The 65¢ denomination depicts a gang of workers shifting railroad tracks in 1912.

In a short report about the anniversary in the August issue of Scientific American, Daniel C. Schlenoff wrote: “Most of the work in building the canal, however, was simply digging the vast amount of dirt and rock out of the trench. In parts of the canal the sides kept sliding in (they still do from time to time) and the dirt that fell into the channel had to be dug out. The landslides were such a problem that some people thought the canal could never be built. Even after it opened two huge landslides in 1915 blocked the passage for months.”

The $2 stamp reproduces a photograph from 1914 showing men dismantling and moving a building. A horse and wagon also are pictured.

The inscription below the photograph shown on the $3 high value reads, “1915, Floor Slab on Rock.”

Other postal administrations in the Western Hemisphere are commemorating the anniversary. For example, Suriname is scheduled to issue six stamps Oct. 22.

Guyana and St. Vincent-Grenadines each issued six stamps May 12. The designs feature a mixture of black-and-white photographs of the construction and opening, and more recent photographs.

A sheet of stamps issued by Singapore Aug. 4 focuses on letters spelling out “I am Singaporean!”

The 15 se-tenant stamps in this sheet comprise the second set in a three-part series leading up to Singapore’s 50th anniversary of independence in 2015.

The first stamp in the new sheet shows a cupcake with a birthday candle.

The next design includes the phrase “I am Singaporean!” in a cartoon balloon, and the rest of the stamps feature one letter each starting with the “a” of “am.” In this case, the design also represents arts and crafts of Singapore.

The designs of the other stamps in the sheet symbolize different aspects of the nation’s people, heritage and culture.

For example, the stamp with the letter “g” honors the great Singapore sale, an eight-week event.

The sheet ends with a stamp for the letter “n” and the National Day parade.

Each stamp is nondenominated with the inscription “1st local” in place of a value.