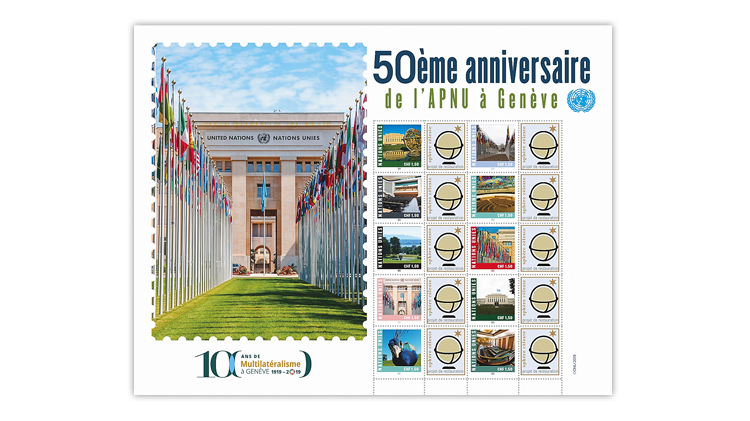 This pane of 10 stamps and labels celebrates the 50th anniversary of the United Nations Postal Administration’s post office at the Palais des Nations in Geneva, Switzerland.

The United Nations Postal Administration issued a pane of 10 stamps and se-tenant labels Oct. 18 to mark the 50th anniversary of UNPA/Geneva.

According to the UNPA, the United Nations and the Swiss Postal Telephone and Telegraph Enterprise (PTT) made an agreement on Dec. 11, 1968, to open the Geneva office. The first postage stamps for this office were issued Oct. 4, 1969.

The stamps in the pane of 10 commemorating the anniversary are each denominated 1.50 francs. The designs show different photographs of the interior and exterior of the Palais des Nations, home of the U.N. office in Geneva, Switzerland. Some designs also show Ariana Park, which surrounds the complex.

For example, the stamp in the lower left features a peacock in Ariana Park. The website of the Geneva office said: “It is not unusual to see peacocks roaming freely and dancing in full splendor in the Palais grounds. Most of the birds that visitors can see today are peafowl donated to UNOG [United Nations Office Geneva] in 1997 by a zoo in Japan. Others were a gift from the Permanent Mission of India. The birds are fed and cared for by the park’s gardeners.”

The 10 labels each show the same design of a symbolic sphere, representing the project to restore the sphere to its original splendor.

The photograph in the selvage features the flag alley that leads to the main entrance of the Palais des Nations. The flags also can be seen on three stamps (upper right, third row right and fourth row left).

An inscription below the photo pays tribute to “100 years of multilateralism at Geneva,” according to UNPA. The U.N. logo and an inscription about the 50th anniversary appear in the upper right of the pane.