Figure 3. Two of the six stamps issued by the Isle of Man April 15 to commemorate the 1,000th anniversary of the Battle of Clontarf in Ireland.

Figure 2. Ireland issued a se-tenant pair of stamps April 24 celebrating its Viking heritage. A brooch,map, sword and manuscript are featured in the designs of these €0.60 stamps. 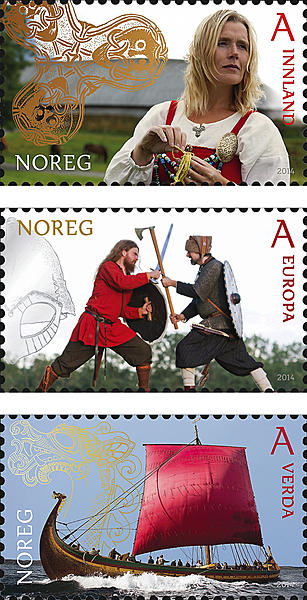 Figure 1. The most recent stamps in Norway’s Tourist series show artifacts, sites and a reconstructed ship related to its Viking heritage.

Viking artifacts are featured on new stamps from Norway and Ireland.

Figure 1 shows these three stamps. They are part of the annual Tourist series of nondenominated stamps. In place of the denomination, each stamp is inscribed with the letter “A” and a word representing the rate it pays: “innland” for domestic, “Europa” for Europe, and “verda” for world.

The designs combine line drawings of artifacts with photographs of tourist sites. For example, the domestic-rate stamp shows a drawing of a bronze belt buckle found at Kvarberg in the Gudbrandsdalen district of Norway and a photograph of a woman dressed in costume at the Lofotr Viking Museum in Borg.

The woman is demonstrating needle art. In addition to such craft demonstrations, the museum offers Viking food and other activities to allow visitors to experience life in the Viking era.

Pictured behind the woman is a reconstructed longhouse, based on the largest such Viking house ever uncovered. Because of its size and the artifacts found there, it is believed to have been the home of a chieftain.

The European-rate stamp features a Viking helmet found at Gjermundbu and a reenactment of two Vikings fighting.

The only complete Viking helmet ever found, this iron helmet was discovered in 1943 in a burial mound on a farm. The helmet dates back to around 970.

Although in popular culture Viking helmets often are shown with horns, there is no evidence to suggest that Vikings ever wore such helmets.

The reenactment scene is from Borrehaugene in Vestfold. The word Borrehaugene means burial mound, and the area, which is a national park, includes seven large burial mounds and many smaller cairns.

The international-rate stamp shows a replica of a Viking longship sailing at Haugesund and a drawing of its dragon figurehead carved by Boni Wiik. The boat is called Draken Harald Harfagre, which translates to Dragon Harald Fairhair. Construction on the ship began in 2010, and it was launched in 2012. Built of oak, the ship can be sailed by a crew of 12, but it would take a crew of 50 to man the 25 oars.

The first recorded Viking raids on Ireland occurred in 795 on the islands of Rathlin and Lambay.

The tourism website www.ireland.com said: “Vikings made their mark in Ireland, no doubt about that. Bearing down on an unsuspecting Ireland from Scandinavia, hordes of wild wayfarers first arrived in the 8th century. They looted Ireland’s monasteries, battled its kings and made off not just with priceless treasures and religious artefacts, but with Irish people as slaves. In the wall of the Church of Ireland cathedral in Armagh lie the bones of Irish hero Brian Boru, who vanquished the Vikings and liberated Ireland at the historic Battle of Clontarf in 1014.”

The stamp on the right depicts the Waterford kite brooch, Ireland’s finest piece of early 12th-century secular metalwork, in the foreground. The earliest known map of Waterford is shown in the background.

Made from gold, silver and glass, the brooch was discovered during excavations in the late 1980s and early 1990s in Waterford and is displayed at the city’s Treasures of Viking Waterford at Reginald’s Tower.

An Post describes the sword as similar to those in the Battle of Clontarf, which took place 1,000 years ago on Good Friday, April 23, 1014.

Reenactments, festivals and other events were held in and around Dublin to celebrate the anniversary.

The Isle of Man issued six stamps April 15 to mark the battle’s millennium.

Maxine Cannon, general manager of the Isle of Man Stamps and Coins, said: “Victor Ambrus has produced some amazing images that capture crucial events in the thousand-year-old shared history of the Isle of Man, Ireland and the Orkney Isles. The Battle of Clontarf is a key event in history that has shaped the future of Ireland and of course the Isle of Man. These stamps pay a great tribute to the memory of the battle and King Brian Boru. We are very pleased to be able to offer our collectors such an important piece of history.”

King Brian Boru and Earl Sigurd were among the estimated 10,000 Irish and Vikings killed during the battle.

Figure 3 shows the £1.60 and £2.30 stamps depicting the king and the fight for the raven banner, respectively.

BDT International printed the stamps by offset in sheets of 15.