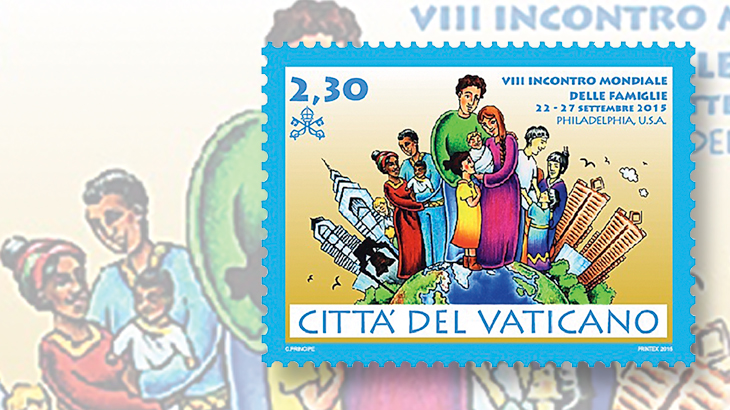 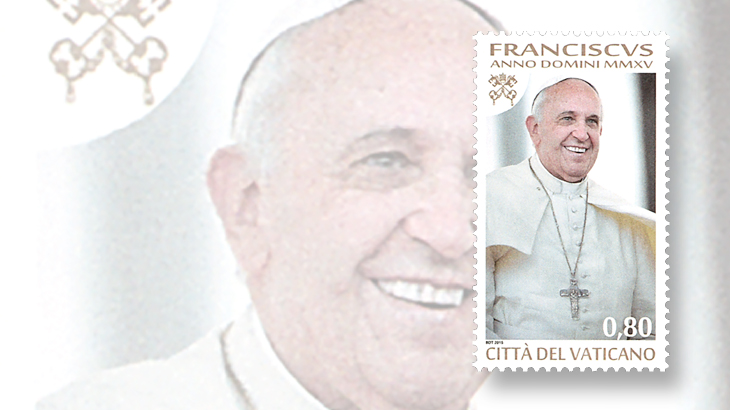 Pope Francis has been honored on many stamps, including this one issued by Vatican City earlier this year, on Feb. 19. 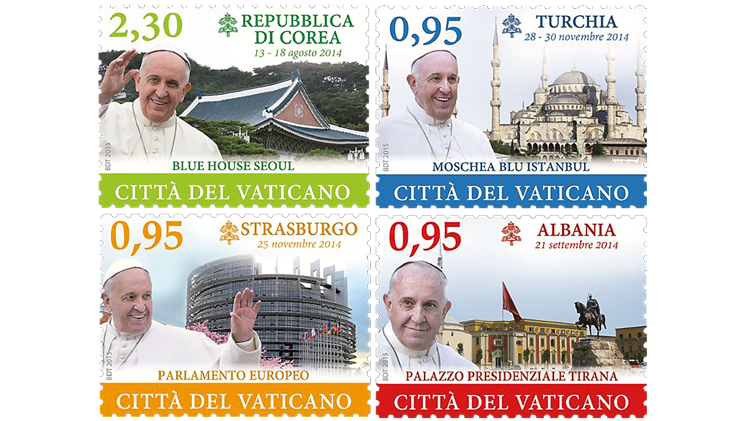 Four stamps in Vatican City's Apostolic Journeys of Pope Francis series honor his visits in 2014 to South Korea, Turkey, France (Strasbourg) and Albania. The stamps were issued Sept. 2, along with a souvenir sheet commemorating his visit to the Holy Land. 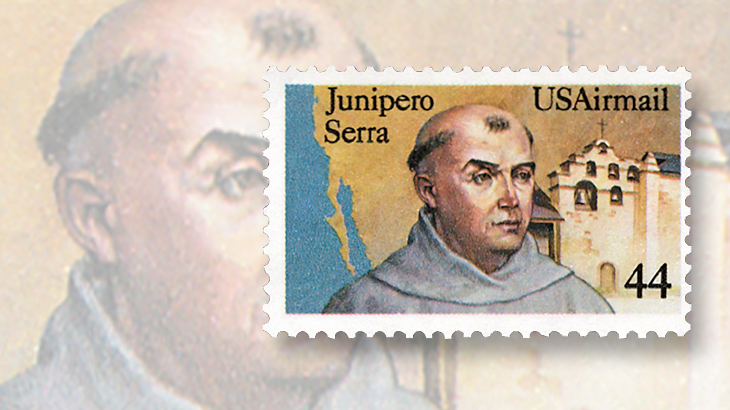 Father Junipero Serra, shown here on a 1985 airmail stamp issued by the United States Postal Service, was canonized by Pope Francis Sept. 23 at the Basilica of the National Shrine of the Immaculate Conception. 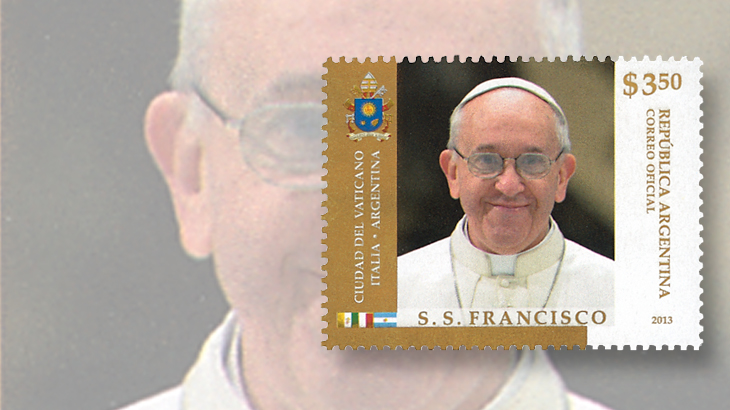 Jorge Mario Bergoglio of Argentina was elected pope March 13, 2013, and on May 2 of that year, Argentina, Italy and Vatican City each issued stamps honoring Pope Francis.
Previous
Next

As Pope Francis makes his first visit to the United States, the eyes of the media and much of the world are on him. No doubt, Vatican City and other postal administrations will issue postage stamps to commemorate the visit.

In fact, the new-issue agency Inter-Governmental Philatelic Corportation announced Sept. 18 that some of the postal administrations it represents will issue stamps honoring the pope's visit.

Pope Francis made his first stamp appearance about six weeks after the college of cardinals elected Archbishop Jorge Mario Bergoglio of Argentina as the 266th successor of Peter on March 13, 2013. Bergoglio took the name of Francis I.

On May 2 of that year, his native Argentina, Vatican City and Italy participated in a three-way joint issue honoring the new pontiff. Each postal administration issued four stamps featuring photographs of Pope Francis.

Brazil, Ecuador, Ghana, the Philippines and South Korea are just a few of the worldwide postal administrations that have issued Pope Francis stamps since that time.

As for his visit to the United States, many stamps already relate to the sights he will see, including the White House, the U.S. Capitol, the United Nations, New York City and Philadelphia. Also, Father Junipero Serra, who was canonized by Pope Francis at a mass Sept. 23 at the Basilica of the National Shrine of the Immaculate Conception in Washington, D.C., has been honored on stamps from the United States and Mexico. The U.S. Postal Service issued its 44¢ Junipero Serra airmail stamp Aug. 22, 1985.

Just ahead of the pope’s U.S. visit, Vatican City issued a stamp Sept. 2 commemorating the eighth World Meeting of Families in Philadelphia. The pope’s visit was planned in conjunction with that meeting. The Liberty Bell is among the Philadelphia landmarks pictured in the design.

Also on Sept. 2, Vatican City released four stamps marking papal visits in 2014 to Albania, France (Strasbourg), South Korea and Turkey. A souvenir sheet with a single stamp honored his visit to the Holy Land. These stamps are part of a series that Vatican City calls the Apostolic Journeys of Pope Francis. The U.S. visit probably will be remembered on a stamp to be issued in 2016 in that series.