Stamps issued in 1934 marked proclamation of the Syrian republic 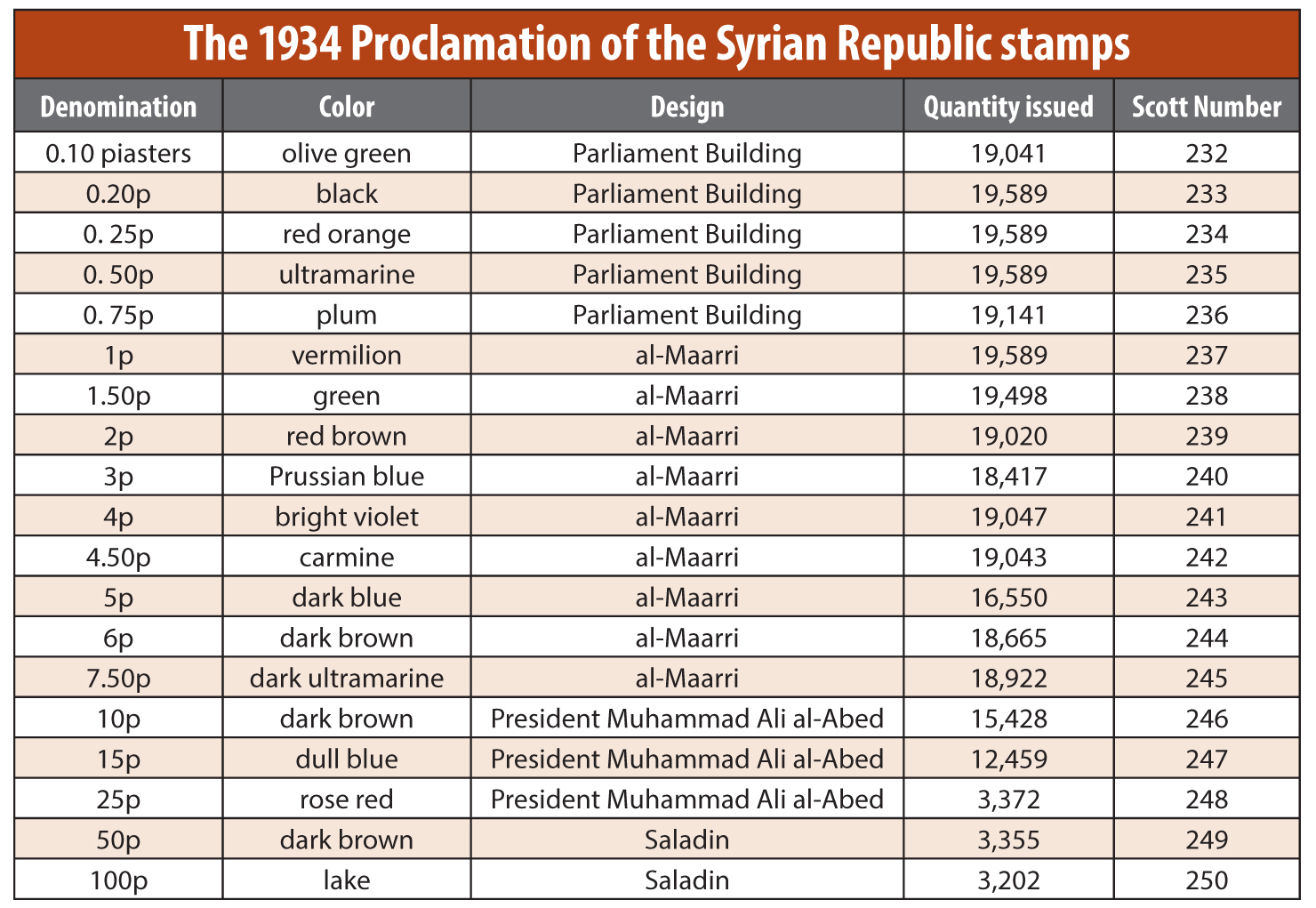 A table of Syria’s 1934 stamps honoring the proclamation of the republic, which includes denomination, color, design, quantities issued, and Scott catalog number. 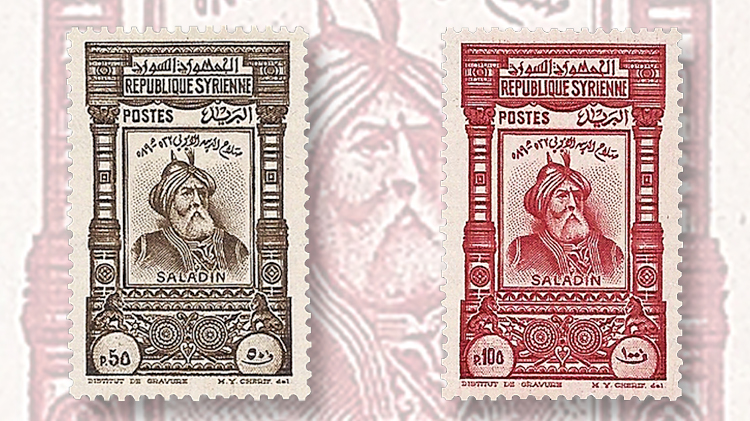 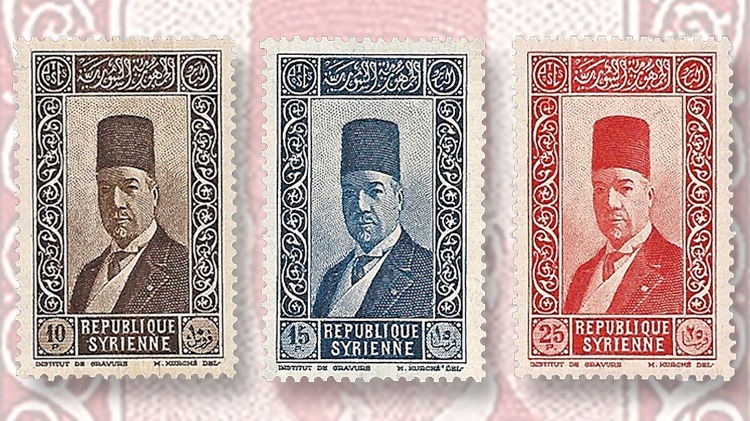 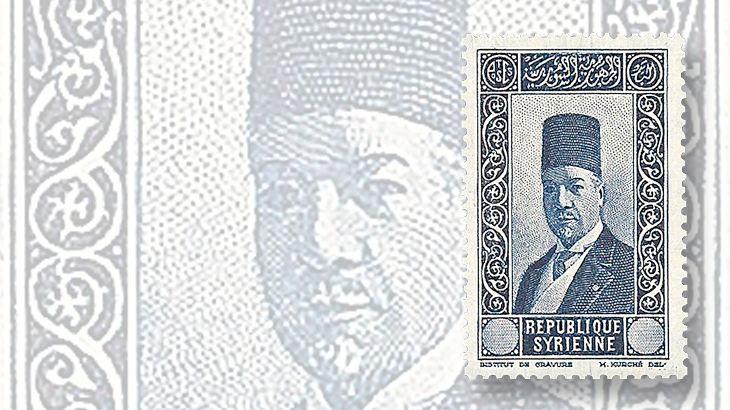 Syria produced proofs of the 1934 Republic issue, including this one for the perforated version of the 15-piaster dull blue President Muhammad Ali al-Abed stamp. These proofs have no denomination inscriptions. 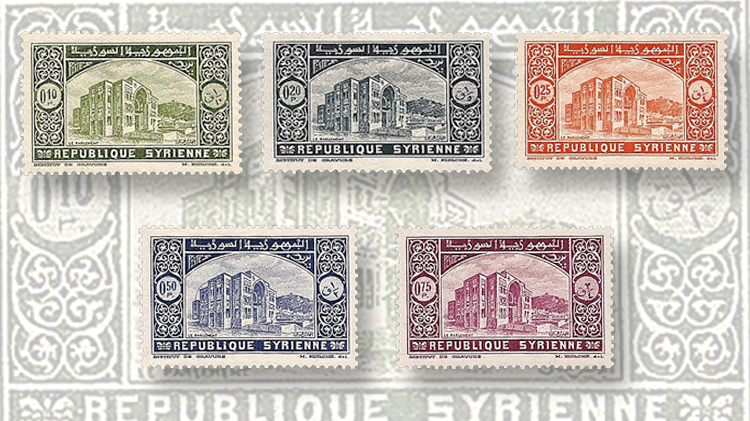 The five lowest denominations of Syria’s 1934 set Honoring the Establishment of the Republic picture the parliament building in Damascus. 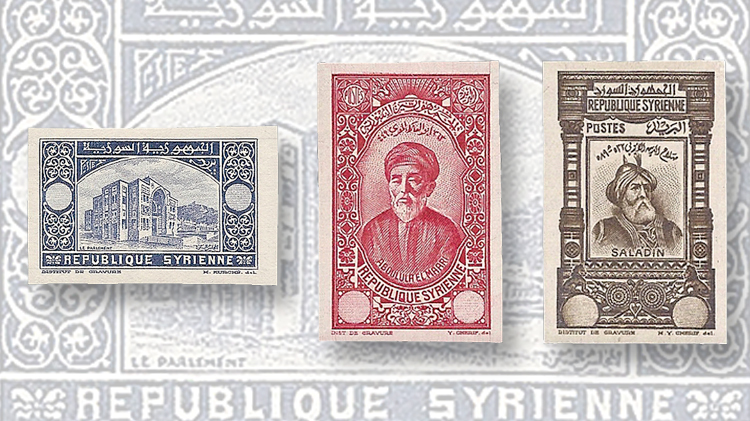 Proofs also were produced for the imperforate versions of Syria’s 1934 Republic issue. Shown here are the proofs for the 0.50p ultramarine, 4.50p carmine, and 50p dark brown stamps. 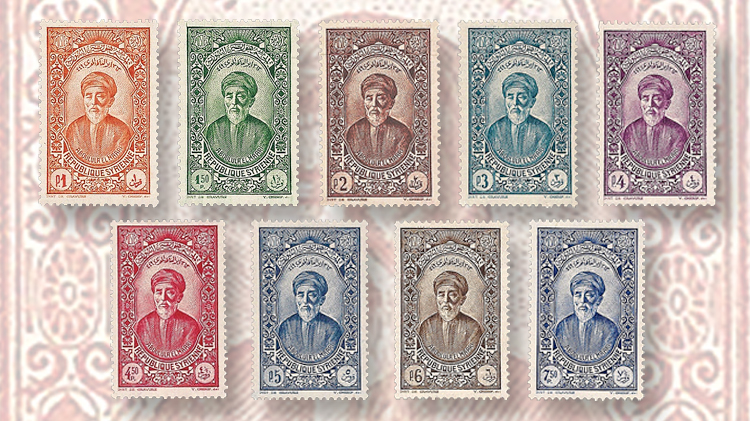 Nine of the stamps in Syria’s 1934 Republic stamp set feature a portrait of al-Maarri, a blind writer, philosopher and poet who lived from 973 to 1057.
Previous
Next

In 1930, the State of Syria became the Republic of Syria, and as a result, a new Syrian constitution was put into effect by the French.

On Aug. 2, 1934, the Syrian government issued postage and airmail stamps commemorating the establishment of the republic.

The stamps were issued on white unwatermarked paper and are perforated gauge 12½.

They were printed in two steps. First, the main design was engraved, and then the denomination and currency were added by typography.

Four different illustrations were selected for the designs.

The accompanying table gives the denomination, color, design, quantity issued, and Scott number for each perforated stamp in this set.

As shown in this table, the lowest quantity issued, 3,202, was for the high denomination, 100 piasters. Thus, only 3,202 complete perforated sets can be assembled.

However, over the years, I have seen many faulty stamps in all of the denominations, so the actual number of sound sets is much lower.

The 0.10-piaster perforated stamp exists with the denomination inscription doubled. This error is very rare; only 50 examples are believed to exist.

In addition, 300 sets were issued imperforate. The imperforate stamps exist as singles, pairs and blocks of four.

All the known imperforate stamps are unused. Some of them have lost their gum, while others exist with faults such as creases, tears and thins.

A few collectors of the stamps of Syria have two sets of this issue, one perforated and another imperforate. Finding fault-free stamps for an imperforate set can pose a challenge.

The first five denominations, 0.10p to 0.75p, are horizontal, all featuring the same central design of the parliament building in the Syrian capital, Damascus, surrounded by an ornate frame.

The top center frame reads, “The Republic of Syria” in Arabic, with the same in French at the bottom center.

At the sides of the stamps are the currency and denomination, in Arabic at right and in French at left.

The designs of the remaining stamps in the set are vertical.

The central design of the 1p through 7.50p denominations depicts a portrait of al-Maarri (973-1057), a blind Arab writer, philosopher and poet who lived in seclusion and believed that rational thought should drive mankind.

His pessimistic views made him believe that children should not be born, in order to spare them from the hardships of life.

Above his portrait on the stamps are his name and life span (in Hijri years) in Arabic, “363 abu al-Alaa al-Maarri 449.” His name is in French below the portrait. Above and below al-Maarri’s name on the stamps is the name of the country, in Arabic at top and French at bottom.

The third design, used for the 10p, 15p and 25p denominations, shows a portrait of President Muhammad Ali al-Abed (1867–1939), the first appointed president of Syria. Above the central design on the stamps is the country name in Arabic, with the same in French at bottom center.

The word “post” is in the top two corners, and the denomination and currency are in the bottom two corners. In both cases, the Arabic inscriptions are at right and French at left.

The 50p and 100p stamps picture Saladin (1138-93), the first sultan of Egypt and Syria. He is famous for leading the Muslim opposition in the Levant against the European crusaders.

Under Saladin’s command, the Ayyubid army defeated the crusaders in Jerusalem in 1187, at the Battle of Hattin, which paved the way for the Muslims to recapture Palestine from the crusaders who had occupied it for about 88 years.

Above Saladin’s portrait on the stamps are his name and life span (in Hijri years) in Arabic, “Salah al-Din al-Ayyubbi 532-589H.” Below the portrait is his name in French.

On all of the stamps, the bottom margins include the name of the printer at left and of the designer at right.

The printer was the Institut De Gravure (abbreviated as “Inst De Gravure” on the stamps showing al-Maarri) in Paris. The designers are M. Kurche for the Parliament Building and President Muhammad Ali el Abed designs, Y. Cherif for the al-Maarri design, and M. Y. Cherif for the Saladin design. On each stamp, “del,” meaning drew, follows the designer’s name.

Proofs in the same colors as the issued stamps exist. The proofs do not bear denominations.

For the perforated stamps, 100 proofs are believed to have been issued for each stamp. A proof of the 15p dull blue stamp (Scott 247) is shown nearby.

An unknown quantity of proofs of the imperforate stamps were issued. Three examples of these proofs (for the 0.50p ultramarine, 4.50p carmine, and 50p dark brown) are shown here.

The intricate details of these stamps make them attractive, and their colors are vibrant and bold. Also, the clarity of these engraved designs almost makes the stamps look new even though they are more than 80 years old.

In my opinion, this stamp set captures some of the snapshots of the history of the country. When I was a young kid, my stamp collecting friends and I were fascinated by this set.

We struggled, trying to assemble a complete set. The top two denominations were very difficult for us to find. I remember that even back then dealers wanted premium prices for the stamps in this set.

Having grown up in Lebanon, Syria was our neighbor. The thought of what is occurring in that country now is saddening to me.

These stamps take me back to a happier place in time, and I hope that Syria finds strength and peace soon in order to return to happier times.