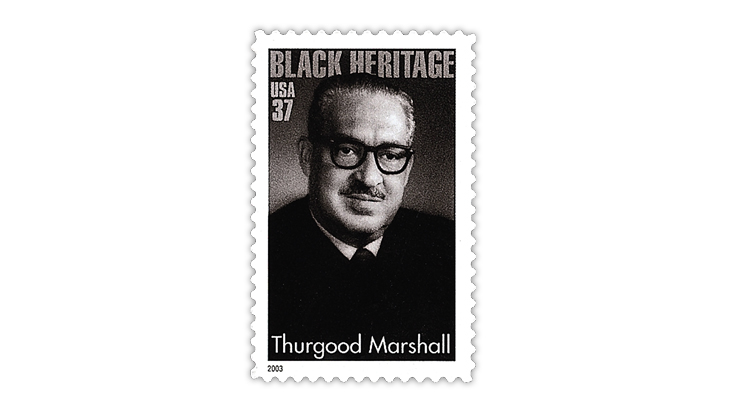 Linn’s Stamp News has reported previously on episodes of the popular television game show Jeopardy! when stamps turn up in a category.

The episode that aired Jan. 7 was special in another way, though, as it was the next-to-last episode filmed by longtime host Alex Trebek before his death from pancreatic cancer.

Trebek died Nov. 8, 2020, two months before the last episodes he filmed in advance were broadcast.

On the Jan. 7 show, the three contestants encountered the category Black Heritage Stamps during the program’s Double Jeopardy round. Participating were Tracy Lee, Natalie Craig and one-day champion Yoshie Hill, all from California.

Following the answer-and-question format of the show, the five answers were revealed by Trebek one by one, but for this category, a stamp was pictured as Trebek read a brief description.

All of the stamps shown were from the United States Black Heritage commemorative series. One stamp has been issued in the series each year since 1978.

Craig chose the $800 clue first and correctly identified U.S. Supreme Court Justice Thurgood Marshall from Trebek’s reading of the clue and the edited image of the 2003 37¢ stamp (Scott 3746).

“A 2002 stamp paid tribute to a true Renaissance Man: this Harlem Renaissance poet,” Trebek said. Craig again replied correctly, with the question “Who is Hughes?” identifying Langston Hughes on the 34¢ stamp (Scott 3557).

After leaving the category briefly to try other subjects, the contestants were shown the $400 question in the stamps category, and Hill correctly named Harriet Tubman as the subject of the 13¢ stamp that introduced the series in 1978 (Scott 1744).

Now in its 37th season, Jeopardy! is produced by Sony Pictures Television.