Are these stamps true errors or near misses? 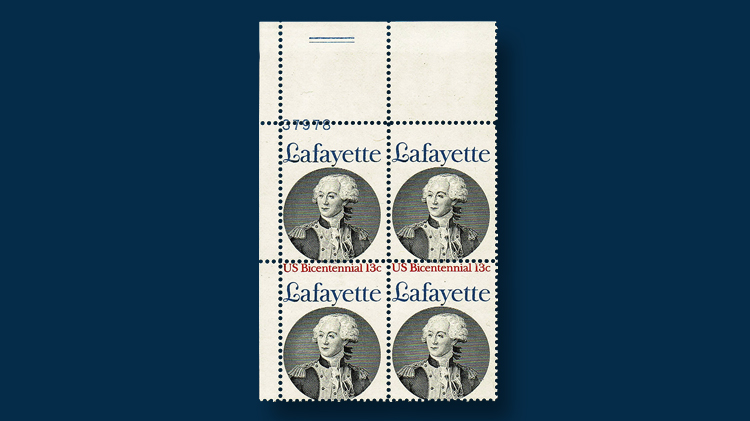 This plate block of the 13¢ Lafayette stamp has the red text misperforated out of the top stamp. 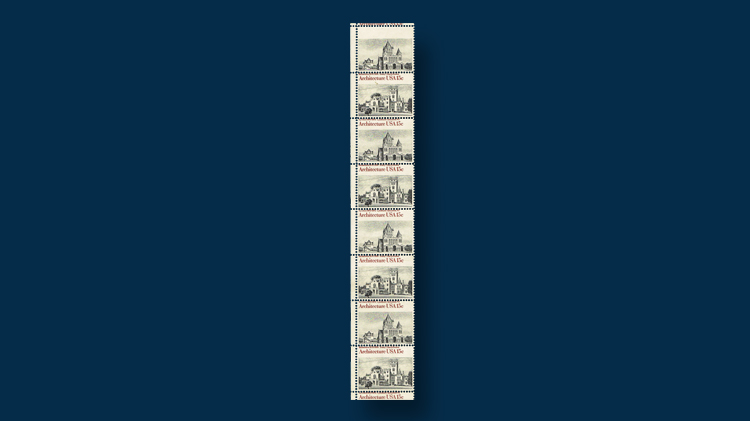 This strip of 10 of 1980 15¢ American Architecture stamps is a misperforation of a lower pane from a sheet of four panes. The selvage above the top stamp includes text from the pane above, but the red brown text both above and below the image of Trinity C 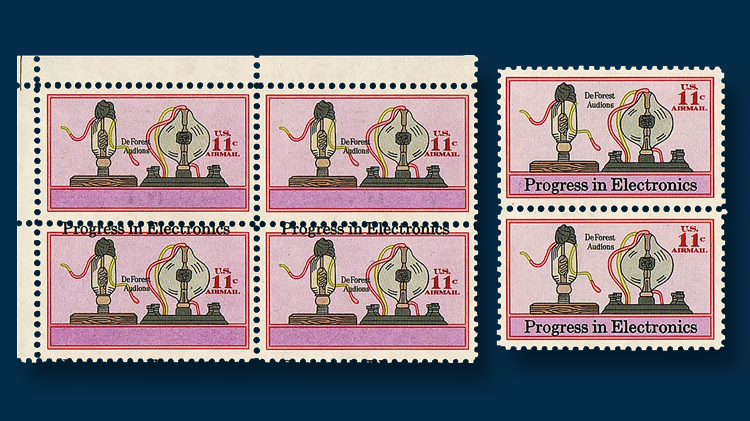 The capitalized letters of “Progress in Electronics” are present in the top stamps of this block. Even if the phrase were missing from the stamps, this would not be an error because engraved black text “DeForrest Audions” is present in the middle of the s 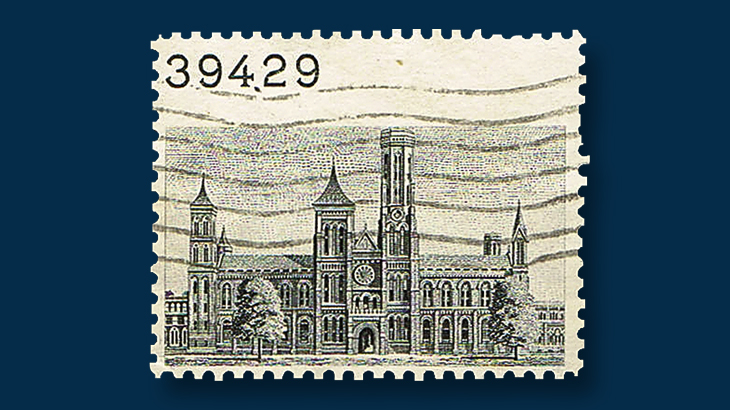 This 15¢ Smithsonian single from the top of a top pane has no trace of the red brown text. 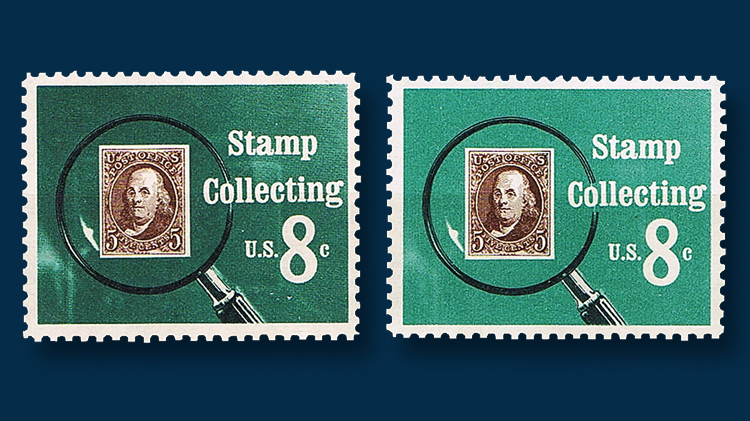 The 8¢ Stamp Collecting on the top seems to be missing the lithographed black shading dots when compared with the normal example below, but some of those dots were found during the expertizing process. 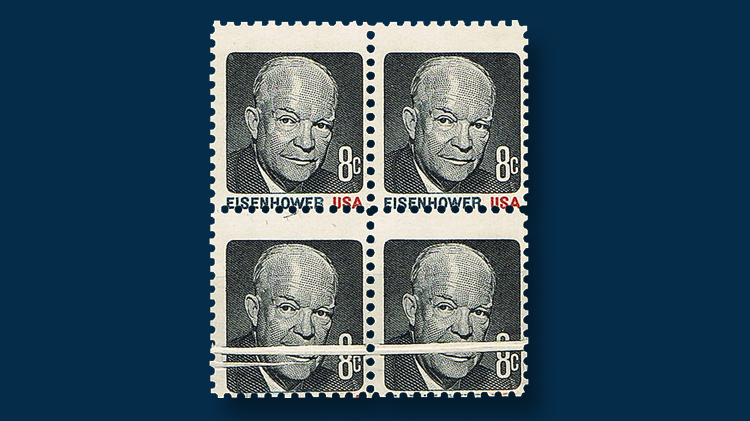 There is a large paper crease through the two bottom stamps of this 8¢ Eisenhower block. The crease was closed during printing and opened during perforating. Most of the text under the portrait on the bottom two stamps is missing, but there is just a bit 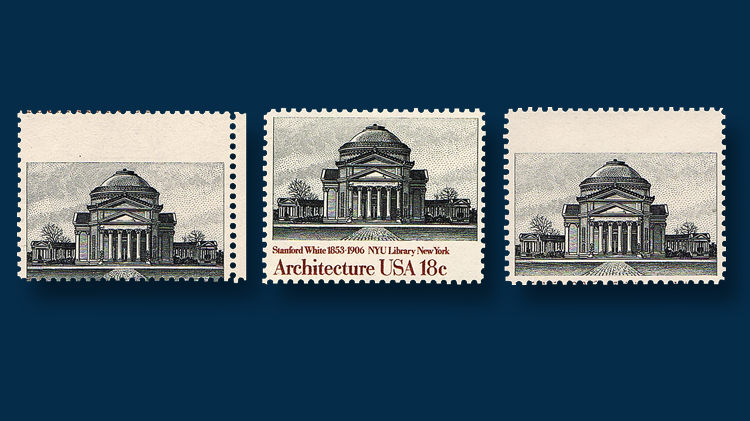 The first and third stamps in this trio of 18¢ New York University Library stamps are varieties not errors, because the red brown text is visible in the perforation tips at top in the first stamp and at bottom in the third. A normal stamp is shown in the
Previous
Next

Several readers responded to my discussion of the misperforated United States 18¢ New York University Library by Stanford White American Architecture stamps (Scott 1928) in my column in the Feb. 19 issue of Linn’s.

In that column, I mistakenly called a top-margin single stamp an error because the misperforation cut the red brown text off the bottom of the stamp. The stamp is shown nearby, along with a normal stamp, and an example of misperf that almost cuts off the red brown from the bottom.

Both stamps are definitely collectible, but only as interesting varieties.

These American Architecture stamps were printed in sheets of 160, with four panes of 40 stamps each and with plate numbers to the outside of the sheet. This means that the misperfed top-margin 18¢ stamp comes from a lower right or lower left pane, and the misperf would have cut into the panes above. This is illustrated nearby by the 1980 15¢ strip of eight Architecture stamps depicting the Trinity Church in Boston and the Lyndhurst mansion in Tarrytown, N.Y. (Scott 1839,1841). Note that the top stamp, which shows the church, is perfectly misperfed to exclude any red brown from the stamp, top or bottom, thus making it a true error.

The fact that red brown text is in the selvage above the error marks this as having come from one of the lower panes of the sheet.

The misperfing of the 18¢ sheet would have resulted in true errors at the top of the upper panes. An example is shown in the form of the used plate single of the 15¢ Smithsonian stamp (Scott 1838). The text in red brown is missing below the image of the Smithsonian, and the top margins could only have the plate number and would be otherwise blank.

The block is from a top pane, and the misperf fully cuts off the red “U.S. Bicentennial 13c” from the two upper stamps, making each one of them the Scott catalog listed missing red error (Scott 1716a). The upper corner stamp also bears 60 percent of the blue plate number 37978.

Color misregistrations also can play a part in creating errors. Shown nearby is block of four 1973 11¢ Electronics Progress airmail stamps (Scott C86), and a pair of normal stamps.

The block was sold in a major auction, without a certificate, described as “Progress in Electronics omitted.” It does seem like that inscription is missing, until you look closely at the top stamps with a magnifier.

The engraved black lettering of the inscription “Progress in Electronics” is 5 millimeters low, but the capital “P” and capital “E” are definitely into the perf tips of the top left stamp.

Another near miss is seen in one of the two 1972 8¢ Stamp Collecting stamps (Scott 1474) shown nearby. The stamp on the left is normal, while the stamp on the right seems to be missing the lithographed black shading dots. Most of the dots are indeed missing, but not all. A 2017 American Philatelic Society expert certificate for this stamp states, “U.S. Scott No. 1474 with just a few black dots present, unused, full original gum, never hinged, genuine in all respects.”

In other words, close, but no cigar. The stamp is known and listed with all the lithographed black omitted, but this isn’t it.

The final near miss is the block of four of 1971 8¢ Eisenhower definitives (Scott 1402). The block is slightly misperfed, with the horizontal perfs shifted just a bit high. The cause is the preprinting paper crease, horizontally across Eisenhower’s mouth in the bottom pair.

The crease was closed when the stamps were printed, but was opened when they were perforated. Without looking at the block with a magnifier, the bottom stamps seem to have lost the blue “Eisenhower” and red “USA”. But under magnification, bits of both colors are evident in the perf tips at the bottom.

The lesson here is that very little can be taken at face value. A practiced eye aided by a magnifier will often tell you what you need to know — even if the news is not entirely welcome.

But if you have any doubt, sending your stamps to be expertized is the best course of action.